While this J.A. Bayona (“The Impossible”) directed effort (based on a best-selling book by Patrick Ness), A Monster Calls, is a wonderful visual and visceral experience (and currently has critics fawning all over themselves), I, for one, can only wonder for whom this film was made. It’s certainly too dark and foreboding for children — despite a young protagonist — and most adults will find the picture an unusually depressing experience.

Simply put, this is NOT a happy production, friends. In fact, if one’s deepest, darkest, most foreboding psychosis had cinematography, this movie would be it. Filmed either in rain, night or a combination of both, the film smothers with an unrelenting, suffocating kind of depression that never lets up, even for moments of levity. There is none of that in A Monster Calls. It’s as laugh-free as a Kevin Hart film, only without the F-bombs.

Let’s jump right in to the depressing details, shall we? Conor O’Malley (Lewis MacDougall, “Pan”) is one of the single most put-upon child characters in motion picture history (unless you count the two little girls murdered at the beginning of “The Green Mile”). He has an absentee father (Toby Kebbell, “Ben-Hur”), an uncaring grandmother (Sigourney Weaver, “Chappie”) and is being raised by a mother dying of cancer (Felicity Jones, “Rogue One: A Star Wars Story”).

On top of all of this, he is also bullied by a stock character from the Harry Potter stable at his British grammar school during the day and has a horrific dreams about collapsing graveyards at night. As exemplified by Ness’ script, there is just no upside for this poor dope. And while there is one adult that seems concerned for his situation, his teacher, Conor does not share his feelings with anyone, preferring to suffer in silence (except we as the audience are kind of forced to suffer along with him).

He does draw monsters, however, and this saving grace activity evidently keeps him from going off the deep end. One dark night, however, he is visited by a huge frightening uprooted tree (from a nearby cemetery, there’s ALWAYS a nearby cemetery in movies like this) with the voice of Liam Neeson (“Run All Night”) and a body like the star of the recent “The Legend of Tarzan,” who tells him the first of three stories (these include tales of an evil prince, a preacher whose young daughters die, and an invisible man). These play like Terry Gilliam fairy tales and are highlighted with dark and imaginative animated illustrations. The Monster’s only request is that Conor relate the fourth tale himself and his nightmare at the end of it all.

This entity, by the way, is an amazingly lifelike creation (under the direction of special effects supervisor Pau Costa, whose credits include “The Revenant” and “Fast & Furious 6”). It also becomes the boy’s ad hoc protector and shoulder, but only appearing at 12:07 (either noon or midnight). The tree, though, as one can imagine, has a dark side, causing him to beat the bully senseless in one scene and for him to destroy his grandmother’s home in another. And, since obviously no one else can see this manifestation, everyone thinks the kid is crazy, or acting out his grief and frustration (just like many in the audience). Thus, he gets away with this behavior because what would “be the point” of punishing him?

In addition, small moments of intimacy are nipped in the bud, as well. We see Conor and his father (Who now lives in Los Angeles with his new family) enjoying a day at an amusement park, but it is soon spoiled by an argument over his dad’s non-interest in bringing Conor to LA to live. Even scenes between the boy and the mother he dearly loves are almost totally devoid of any human emotion until the very conclusion of A Monster Calls.

Credits go to Weaver, a three-time Oscar nominee, for her difficult role in bringing the stiff, stodgy grandma a deserved note of humanity, while Jones does her Debra Winger dying routine adequately and Neeson’s voiceover work is impressive, to say the least.

There is certainly a precedent for a child to use his or her imagination to overcome a troubled reality. It happens all of the time, in fact, it was something that took place in my own life. Here, though, it is bolstered by amazing production values and a huge budget most young people never have privy to and is somehow no more real or relatable because of all of this.

On another personal note, I am someone who pretty much wears his heart on his sleeve, movie-wise. I have had teary eyes and lumps in my throat after viewing many productions such as “It’s a Wonderful Life,” “Miracle on 34th Street,” “Old Yeller,” “Field of Dreams” and most recently, “Hacksaw Ridge,” so I am not a person unaffected by the moving picture. In this case, however, I just could not work up even this slightest emotion (sad or glad) because no one in A Monster Calls exhibited any. Crushed as I was under the weight of this overwhelmingly dismal experience, my mind eventually just shut itself off. I enjoyed the beautiful images contained therein, but just could not muster the ability to care beyond that. 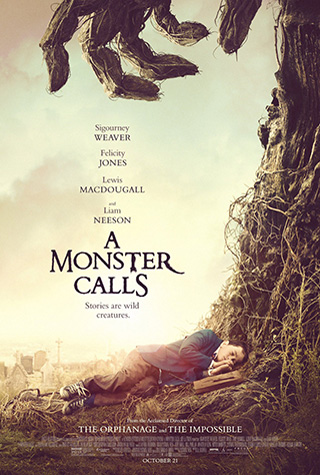