Vampyres is based on a 1974 cult classic. I haven’t seen the original, but it looks perfectly sleazy, decadent, and nasty, so I’m sure it’s right up my alley. Unfortunately, its successor is charmless and devoid of such luxuries as acting and a decent script. Which kind of means it fails at being a bad movie, which is kind of hard to do.

The story for it goes like this: Campers in a hidden forest, reported to be the scene of many a missing person, stumble upon strange doings. There seems to be a pair of super-sultry sisters who love having guests over. Because guests represent sustenance, and our ladies are always hungry. So they ensnare and enslave their prey in a boarded up house, seemingly in the middle of nowhere but also right next to an inn, the presence of which has almost nothing to do with the movie except to serve as a place to stay for one of the main characters and for the hotelier to provide some spooky background.

Vampyres opens with the attack and abduction of two motorcyclists traveling through the woods. Turns out these two were supposed to meet up with three other youngsters as part of a camping trip designed to inspire their creative sides. For Harriet (Verónica Polo, “Wild Oats”), this means photography, and she quickly makes use of her lens to capture the eerie atmosphere of their surroundings. But as time passes and the first two don’t show up, the trio begin to get a little concerned. Well, Harriet does; the other two (Anthony Rotsa, “The Promise” and Víctor Vidal, “Stop Over in Hell”) make fun of her and try to fake-scare her, as you do in a slasher movie.

Meanwhile, a man arrives at the local inn. It’s obvious he’s been there before, as the hotelier (Caroline Munro, “The Absence of Light”) hands him a wrapped box “knowing that you’d return,” as she says. That might count as foreshadowing in most films, but here it’s just discarded filler. And then for someone who seems to know what he’s getting into, our man is himself abducted and used rather easily. He spends much of the movie wandering in a daze, weak of both flesh and mind.

Scooby and the gang are getting pretty restless, so they split up and search for clues, which predictably results in bad things happening. It’s not important what happens to whom. I mean, there are only three in their group, and two of them are guys. Who do you think might make it through?

There are so many instances in the movie that just lack common sense from the character’s perspective. Why does so-and-so wander into the just-opened-by-itself hidden door? Well, to further the plot, obviously. I mean, the rest of us would have run. Fast. Not this one. But my favorite weirdness came when a character comes to a grisly end in the front seat of a car. Later, the car’s owner — who had sent said character to the car in the first place — arrives at the car himself. “Oh boy!” I thought. “Wait ’til he finds the body!” There was no body. And the character isn’t mentioned again.

There were, happily, some high points to the shenanigans, and they all belonged to evil vixens Fran (Marta Flich, “Omnivores”) and Miriam (Almudena León, “Wax”). Of course, being evil vixens, these two spend much of the movie mostly (if not completely) naked. Oh yes, hide the kids and morally outraged from this movie, because trouble will go down otherwise. Anyway, both Flich and León are terrific in the roles, oozing villainy and other substances in every chewy scene.

But overall, there’s not much to like about this new Vampyres. It looks polished, and it looks like a lot of work went into it, but there’s a lack of talent on both sides of the camera. Anytime I wonder why characters do what they do during the movie is not a good time — typically, this means the perceived miscues in logic are sufficiently stark that I can no longer suspend my disbelief. And let me tell you, there wasn’t much disbelief that could be suspended for this movie. 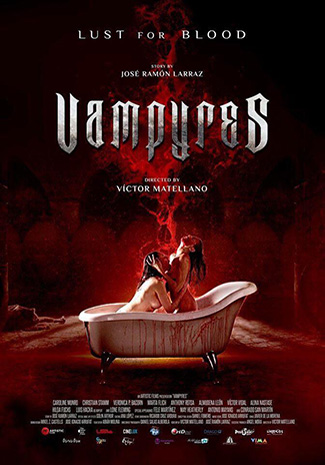