During the prologue for this Anna Foerster directed effort (she of such TV series as “Outlander” and “Criminal Minds”), the lead character, Selene (Kate Beckinsale, “Love & Friendship”), says that this final installment of the semi-popular series and “Underworld” is (finally) at an end.

Dare to dream, but lo and behold, at the conclusion of this monster monstrosity, if they don’t prime us for another sequel. Well, we will just have to wait and see what the box office is on this one and, hope there are not enough fans of this franchise to demand its eventual renewal.

This film, the fifth (following 2003’s “Underworld,” then “Underworld: Evolution,” “Underworld: Rise of the Lycans,” and “Underworld: Awakening”) features the same hackneyed plot of vampires vs. lycanthropes (or werewolves to the uninitiated) and the girl, Selene, who straddles the fence (a pre-credit cartoon explains it far better than I ever could). It’s basically “Twilight” without the laughs, nuanced storylines, amazing acting performances and complicated, introspective plot complications.

Underworld: Blood Wars is, however, a much, much funnier production than “Masterminds,” “Office Christmas Party” or “Why Him?” (albeit inadvertently) if that means anything. I’m not sure this ridiculous edition can support a plot, but I will do my level best to explain what there is of it. Selene, in a past installment, slept with a lycan (who wouldn’t?) and had a daughter, Eve (who is only seen in short fragments, lucky her), and whom Selene has hidden on the Moon somewhere (I think). She then killed a vampire named “Victor” and has incurred the wrath of the other undead creatures in the Eastern Coven. By the way, in her four “Underworld” films, Selene has probably killed at least 3,424 lycans, vampires and totally innocent bystanders so she’s earned some bad feelings.

The lycans, led by the hunky (are there any other kinds of lycans?) Marius (Tobias Menzies, “Black Sea”), want to locate Eve because she has mixed blood and that will not only bring “peace,” but will supply this picture with its much-needed title. Loyalties turn on a dime here, friends, so pay attention to this next part. And while Selene and her friend, David (Theo James, “The Divergent Series – Allegiant”), are out and about, they are attacked by werewolves and forced to seek shelter at the coven where she killed the aforementioned “Victor.”

No one wants her there, but the creepy Gothic princess, Semira (Lara Pulver, “Edge of Tomorrow”) and her effeminate subordinate, Varga (Bradley James, “Damien” TV series), seem to think she could help train the weak, pasty, underwhelming nosferatu (who seem to have no discernible powers with which to fight wolfmen, plus they burst into flames during the day) for what could possibly be the ultimate showdown between these mythical beings.

Of course, once drawn into the situation, Selene finds herself in trouble again and is forced to retreat to the North Pole and take refuge in the Great Northern Coven, which is populated by blonde, peacenik German models who wrap each other up like mummies and visit the dead, or something like that (my mind began to wander at this point and I am not sure exactly what was going on).

With no reason other than to prolong Underworld: Blood Wars (which already runs 91 minutes more than it should), the lycans attack this fortress, while back at the Eastern Coven, everyone readies for the final battle, with David and his new, bright, shiny sword now in charge. Considering that these two groups are supernatural and mythic creatures, however, it came as a complete surprise to me that they are all susceptible to being stopped by bullet wounds and getting punched in the face — uh, except David and Marius, who get shot and slapped numerous times and just expel the fragments (don’t ask).

This also begs the question, with all of this otherworldly power these folks exhibit, why is the final conflict just a machine gun fight? No stakes through anyone’s heart; no silver bullets? What gives?

One thing that gives, though, is one’s suspension of belief. For example, I could not believe that a franchise which relies so heavy on special effects has absolutely none that could be remotely perceived as well done. When the vampires burst into flames (which they did over an over again) or when the cavemen-like characters turn into werewolves (which they did over and over again), the CGI is so ludicrous, so goofy it’s laughable. With each passing scene, the technology which gave series like “Harry Potter,” “Lord of the Rings,” “Star Wars” and even “Batman,” among others, their respective amazing visual dimensions is mostly and/or completely lacking. I have honestly seen high school film projects with better effects than Underworld: Blood Wars. That being written, I have also viewed grade school pageants with more thoughtful dialogue and deeper character development. Thank you, Cory Goodman (“Priest”).

Same can be said about the acting. Beckinsale, who excelled in “Much Ado About Nothing” two decades ago, gives a one-note performance that makes her appearance in “Whiteout” seem award-worthy by comparison. The others, including longtime British presence Charles Dance (2016’s “Ghostbusters”) and James Faulkner (“The Bank Job”), either cannot or do not even try to save this from circling the drain.

Heck, we’re not even treated to a little campy fun (what with the vampires dressed either in long trench coats or tight black Spandex and werewolves that change back into fully dressed regular people and all) because this mish-mash takes itself so bloody seriously. Therefore, I seriously cannot recommend Underworld: Blood Wars to anyone, anywhere at any time. Ever. 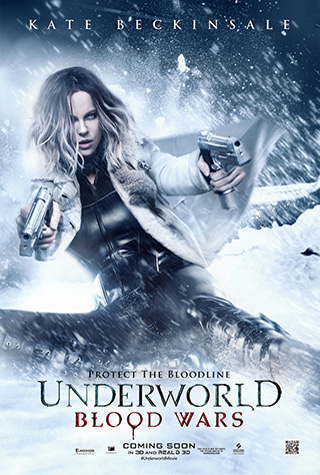