Christianity came to Western Japan in 1542 by way of Jesuit missionaries from Portugal who brought gunpowder and religion. They were welcomed mostly for the weapons they brought and their religion was allowed to be practiced openly. Christianity was banned, however, after reports circulated of missionary intolerance towards the Shinto and Buddhist religions, and there were rumors of the sale of Japanese into overseas slavery. It wasn’t until the late 1630s, however, that a complete ban on Christianity was declared and enforced by the Tokugawa Shogunate and persecutions, torture, and murders were relentlessly pursued.

Based on Shusaku Endo’s 1966 historical novel derived from the oral histories of Japanese Catholics, Martin Scorsese’s masterful film Silence brings us face to face with the repression faced by the early missionaries. While the film does not condone the subjugation of religious minorities, it examines the advisability of attempting to convert a country’s population without a deep understanding of their beliefs and traditions. The film opens in 1635 as two Jesuit priests, Sebastian Rodrigues (Andrew Garfield, “Hacksaw Ridge”) and Francesco Garrpe (Adam Driver, “Paterson”), request permission from their superior Father Valignano (Ciarán Hinds, “Bleed for This”) to go to Japan to discover the fate of their mentor, Father Cistavio Ferreira (Liam Neeson, “A Walk Among the Tombstones”), rumored to have renounced his faith and to be living with a Japanese wife.

The missionaries are not unaware of the persecution and murder of thousands of peasants and priests who have converted to Christianity, yet they are anxious to undertake their dangerous mission to support the local Christians and to find out the truth about Father Ferreira. When they arrive in Japan they are greeted by a group of “hidden Christians” known as “kakure kirishitan” who have been compelled to publicly renounce their faith and go into hiding to practice their faith in secret, knowing that anyone can earn 100 pieces of silver for turning in a Christian to the authorities and 300 pieces for surrendering a priest. Here, the two priests hear confessions and give baptisms and say mass in the middle of the night in order to avoid capture.

Working with such past collaborators as editor Thelma Schoonmaker (“Learning to Drive”), production designer Dante Ferretti (“Cinderella”), and cinematographer Rodrigo Prieto (“The Wolf of Wall Street”), Scorsese does not hold back in showing the graphic nature of the torture that those who are arrested must endure. This includes beheading, being wrapped in straw and burned alive or thrown into the sea. Some are mounted on a cross and placed in the sea until death comes mercifully after repeated pounding of the waves against them. For some, to die a martyr is a high calling, one which will be rewarded in the afterlife and they accept their fate willingly similar to today’s Islamic suicide bombers.

Rodrigues, however, now separated from Garrpe, takes on a Christ-like appearance and begins to see himself as the personification of Jesus. He now must choose between rigidly maintaining his religious beliefs or saving the lives of innocent villagers by surrendering to the audacious Inquisitor (Issei Ogata, “I Am a Monk”) by placing his foot on a carved Christian icon known as a fumie, an act tantamount to renouncing his faith. In doing so, Rodrigues thinks about Kichijiro (Yôsuke Kubozuka, “Deadman Inferno”), a convert who continually begs for the Sacrament of Penance after he apostasizes again and again. The issues are further crystallized when Rodrigues confronts the truth about Father Ferreira.

While Silence does not fully achieve the transcendence of a true spiritual epic, Scorsese should be acknowledged for opening up the space for a meaningful inquiry into a subject that has perplexed countless philosophers and students of religions for centuries. Perhaps inadvertently, however, the film does shine a light on the inadequacy of both secular materialism and fundamentalist religion to satisfy our true spiritual needs and answer the overriding question of the film. This must be answered by each person through their own direct experience. For me, to know God is to embrace the silence, to live in it, and know that it is the “source of all sound.” 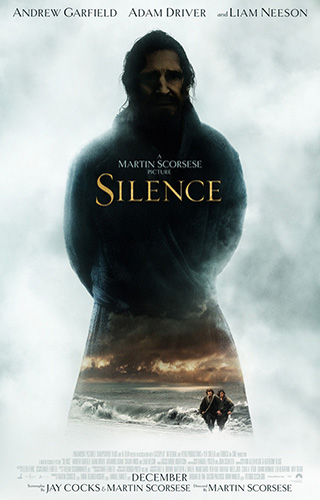