“Take care of things close to home first. Straighten up your room before you save the world. Then save the world.” — Ron Padgett, “How to be Perfect”

Interior, bedroom — Monday morning. An aerial shot on a sleeping couple. It’s about 15 seconds before the clock hits 6:12 and Paterson (Adam Driver, “Star Wars: The Force Awakens”) wakes up while he lets his wife Laura (Golshifteh Farahani, “Exodus: Gods and Kings”) finish her dream. Then she wakes up and tells him what she’d just dreamt as little foresights of what the days will bring. His daily life is the woken version of her dreams.

Jim Jarmusch’s most recent feature film, Paterson, is one of those contemplative films for which the director became so prominent — and also for which he has become a school all onto himself. If, for many viewers, it could be considered overtly deliberate and covertly derivative, it would be important to point out that for the American filmmaker his style (with, yes, his deliberative powers almost as loud as his contemplative ones, often clashing and, more often, competing against each other) is as deeply ingrained in patterns as it is for his main character here: A bus-driver who writes poetry on his way to work, starts sketching his poems always in the same four minutes he has before being interrupted by the bus monitor — invariably with a new ache to tell every day — and then continue it as he drives his route in Paterson, New Jersey, spicing his observations up with what he overhears during his driving shift.

Paterson thus follows the same pattern during a week in Paterson’s life — a particularly significant one for what the pattern means. For the central character around whom the narrative orbits, the monotonous routine to which we’ve been invited to peep is but a free ride to see (and side) with him what lies at the heart of opaque mundanity: Possibility.

And there’s Laura — and there’s home. That’s one of the possibilities this film explores. More than a simple wink to Petrarch (one of Paterson’s role model), it is as though we were enabled to think what if Petrarch had renounced to the unbeatable beauty of unrequited love, that indefatigable source of inspiration called idealization beating at the core of his sonnets, and succumbed to the banalities of married life? Because that’s where Paterson draws his inspiration from. His poetry is as mundane as his walks to his job or to the bar where he goes at the end of his daily journey as he walks the couple’s dog, a bulldog called Nellie, to drink neither more nor less than a beer. Had Petrarch married Laura would those sonnets of imbibed beauty ever come to existence? Hard to know. We can guess, nonetheless, that he would have been a poet just as much.

Paterson’s source of inspiration, though, comes from the smallest things — and it is all small in his world. Every workday he has a small glass with little milk and Cheerios. That Monday, the Monday we meet him, he continues to look at that little blue tip matchbox while he tries to lit a poem with them as the central figure. He shares a little house, goes for little walks, and writes little poems in his “secret notebook,” some of which sometimes he recites to Laura, as many of them unavoidably lead to her (as all of them are, in one way or another, about her). And so he lives a simple life with his wife. And so simplicity and littleness are sometimes prone to meet at points in which they almost look as matching twins.

Laura is no character bereft of inspiration, though — there’s more to her than meets the eye. She seems at first like the happy-go-lucky accomplice of a great man dressed as a regular Joe who cooks and waits and dreams for him, but she’s much more. A muse we know she’s no more, at least not the regular one (the perfect idea with no physical presence). Her at times amusing at times unnerving optimism in ingenuity costume gradually let us in a character of extraordinary quality. She’s behind all little things, all everyday, mundane things, because she’s the one who’s able to enjoy them in the first place, for she’s the essence of aspiration (a form of aeolic respiration): A person who hopes for everything and expects for nothing.

It’s true that Laura seems to be only waiting for him to come — every workday. While she waits, though, she fills the house (and her wardrobe) with geometrical figures (preferably round, likely concentric) that introduces small variations into a plain routine. She also envisions big things, and takes the practical path of doing something with what she’s got at hand. So, as much as she aspires to become an entrepreneur in the cupcake business, she cooks them and takes them to the local farmer’s market to sell on the weekend. As much as she aspires to be the next country sensation, she practices with her guitar every day after it arrives. Will she become any of those things? That, my friends, is what matters the least.

It is doing for doing sake what in Paterson opens the doors to the lodges of possibility — dreams are but the love songs of steady actions. Paterson is just that, a poet gone steady. Somewhere between Petrarch and William Carlos Williams (his favorite poet, also a Paterson, NJ, original, also a lover of small things, also a breadwinner by other means) we meet our character. He sings to simple things and profess a deep respect for the inanimate world, which is as rich as the animated one. For him, neither great ideas nor ideals dressed up as dreams will make it to the page. For dreams are things, just as a poem is, or words, or a piece of paper, or as is the pen wiggling at his fingers as he scribbles a pattern, any pattern, whichever resembles a thing we call letter. Poetry comes in to open up the doors of the possible in what already exists, of what could, should, might, would or will exist in what is already there. His words may deceive at first as the reiteration of the tangible, but they really point towards the materialization of the possible. And so does Jarmusch’s film.

Immersed in his routine, Paterson seems sentenced to sameness, but differences quickly appear. Difference is precisely what emerges from such closed patterns, for in a place where all seems to be the same the slightest difference can be perceived right away. That seems to be at the root of poetry. In a world that’s so enclosed in strict patterns, it is only by paying attention that a chance encounter with the infinite, which is infinite beauty, which is infinite depth, is possible.

Paterson’s days go stable, sturdy — hers don’t. Laura’s dreams change as often as her aspirations, while Paterson’s seem to remain the same. And here, may I stop to praise the work of both leading characters, balancing this ball between a man who only dreams when he’s awake and a woman who never ceases to dream. Both Driver and Farahani are beautiful to watch, as they live inside this bubble they’ve created with Nellie as the only possible disruptor. Paterson, it’s true, has the bar at which he goes for a beer every workday. He even goes through some (mildly) dangerous adventures there. But it would be too far-fetched to call that a social life. There’s none. Society, in their case, is a long-standing complicity they display day after day.

It is in this lack of social life that we can explain their lack of true ambitions — more for him than for her. They seem content with what they have. Poetry is not a ladder to another life or to a more interesting way to make ends meet. Nor is it country music or entrepreneurship for that matter. She does hope, though; he does not. So when she encourages him to make a copy of his secret notebook, we know well he won’t. A beautiful scene stands out here, as a setup for what will become the climax of the film: Paterson sits with a young girl (a twin) and aspiring poet, an Emily Dickinson lover (another mistress of little things) and asks her to read him her last poem. We see his eyes as he’s outperformed by a 10-year old girl, keeping the opening stanza in his mind for days to come. We watch him realizing that poetry cannot be truly assessed by anything else than the memories it creates and the images it carves. And that can’t be ambitioned any more than it can be expected.

Then Saturday comes, not a workday, thus routinely different — this day doesn’t start with an aerial shot. It is her who wakes up first. A small anomaly. She’s the one going to sell her cupcakes, then celebrate her earnings by treating him with a dinner and a movie. An anomaly, seismic within the context of the movie, will change the course of the night and the course of Sunday, which starts on an aerial again. He’s already up. The anomaly makes Paterson question whether he’s a poet anymore, and it would be another chance encounter, this time with a Japanese translator of Williams poetry (of Williams’ Paterson, incidentally) that will turn things on.

Paterson’s given a gift: The gift of the empty page — the greatest gift of all. For we just have seen, for the better part of two hours, the difference there is between wanting and wishing. Both Paterson and Laura have made their life perfect out of wishing. The perfection I’m speaking of is the one the poet who wrote Paterson’s lines in Jarmusch’s film, Ron Padgett, spoke of in his “How to be Perfect.” Theirs is a calm wish that never wants anything. The wish that, as in a blank page, opens possibilities up where wanting shuts them down. The kind of wish that parents a healthy pattern, the offspring of which dwell in little things, that dwell in possibility. It is in this pattern that the future is birthed.

It is Monday again in Paterson — there’s another aerial shot. 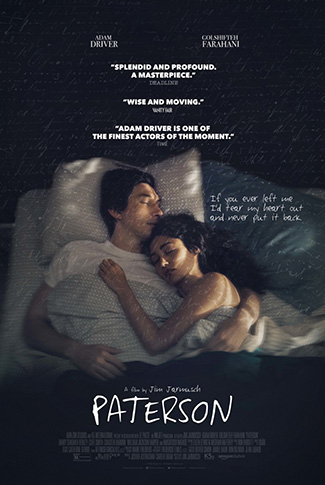