Fear that your children may mimic your worst qualities is the driving force in Hirokazu Koreeda’s (“Our Little Sister”) After the Storm (Umi yori mo mada fukaku), a compassionate look at the struggles of a Japanese family. Its title derived from the lyrics of an old pop song, the film is set in Kiyose, a city near Tokyo where it is beautifully shot in the housing compound where Koreeda grew up by cinematographer Yutaka Yamasaki. Ryota Shinoda (Hiroshi Abe, “Everest: The Summit of the Gods”) is a novelist who has not had a story published in fifteen years and is forced to work for a private detective agency, which he claims is solely to do research for his next novel. Using his detective job to spy on his ex-wife’s new boyfriend with the help of his young detective-partner (Sôsuke Ikematsu, “Mubansô”), he learns that she is dating a wealthy businessman who is intrusive in Shingo’s life.

A gambling addict who squanders much of his earnings, Ryota’s relationship with his young son Shingo (Taiyô Yoshizawa) is in jeopardy as his ex-wife, Kyoko Shiraishi (Yôko Maki, “Like Father, Like Son”), threatens to keep him from seeing Shingo until he catches up on his child support payments. The first time we see Ryota we are not impressed. He is going through his recently deceased father’s private belongings to see if he can find anything that he could sell. It seems, however, that his father was also a gambler and Ryota’s search might have been better conducted at the local pawn shop. While it is clear that he is not a role model for parenting, Ryota is man of considerable charm and Koreeda does not stand in judgment of his actions, but depicts his travails with warmth and humor. We see that in spite of his dubious habits, his sister (Satomi Kobayashi, “Mother Water”) and his employer are both willing to lend him money.

With the help of his own mother, the spunky and very astute Yoshiko (Kirin Kiki, “Our Little Sister”), Ryota has his sights set on reuniting with Kyoko and Shingo. His love for his son is very real, but he seems incapable of breaking from his demons, the same ones that dominated his father’s life. Attempting to win back Shingo’s love, he takes him out for a hamburger, buys him new shoes, and visits Yoshiko, the boy’s beloved grandmother. Knowing that a typhoon is on the way, the family comes together to spend the night and to wrestle with the direction that their lives will take. “Why can’t men ever love the present,” Yoshiko wonders, highlighting an important message of the film, that people must accept the reality of how they really are.

While there is truth to the idea that we must accept who we are, there is a thin line between accepting your limitations and recognizing that you have the power to transform your life, to live the life you want rather than the life you are resigned to. Also, while the idea that sons will always take after their father is accepted without question, the reality in my experience is that sons will either take after their fathers or make very sure that they do not. After the Storm is one of Koreeda’s best films and, as always, he elicits exceptional performances from children as well as brilliant takes by Kiki and Hiroshi Abe, but, in my view, its message is debatable. 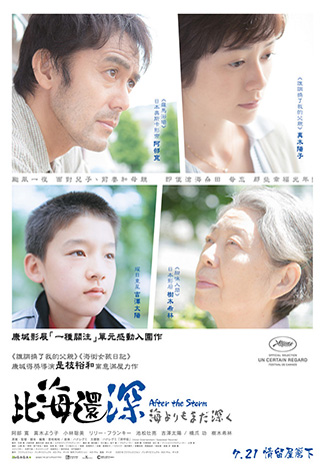