Dedicated to Ozu star Setsuko Hara, Argentine director Matías Piñeiro’s Hermia and Helena follows his three previous films, “Viola,” “The Princess of France”, and “Rosalinda,” with a work depicting characters loosely based on female heroines in William Shakespeare’s comedies. Shot in Buenos Aires and partly in New York, the film centers on Camila (Agustina Muñoz, “The Princess of France”), a Buenos Aires theater director, who has been invited to New York to translate Shakespeare’s “A Midsummer Night’s Dream” into Spanish and then go back to Argentina to rehearse. According to Piñeiro, “It is a film about coming and going, about changing states, changing languages and sounds.”

Inspired by his own experience in New York where he came on a fellowship in the arts, Piñeiro shifts the focus from a high energy fast-talking beginning in Buenos Aires to a more laid back thoughtful mood in New York. Camila is in New York to replace Carmen (María Villar, “Viola”), a friend from Buenos Aires, in the institute as well as in her rental apartment. Like the two young women in Shakespeare’s play, Camila and her friend share relationships in a sequence of vignettes that take place over the course of a year. Divided into chapters bearing the names of the characters featured in the episode such as “Carmen & Camila,” “Camila & Danièle,” “Gregg & Camila,” and so on, the film is enhanced by a spirited piano score.

Piñeiro manages to keep things light and the sequences have a playful feeling in keeping with the spirit of the Shakespeare play. Camila begins where Carmen left off, picking up on her relationship with hipster Yank Lukas (Keith Poulson, “Little Sister”) and local filmmaker Gregg (Dustin Guy Defa) who shows one of his short films made from footage of a 1940’s black and white film with a voiceover based on Du Maurier’s Rebecca. There is an enigmatic relationship with Danièle (Mati Diop, “Fort Buchanan”), another member of the institute, who has been traveling in the mid-west and who sends Camila post-cards from the cities she visits that Camila hangs on a map on her wall. Flashbacks to Buenos Aires also include Carmen’s boyfriend Leo (Julián Larquier Tellarini, “Terror 5”).

Hermia and Helena is about movement, from one place to another and from one relationship to another, but the characters and their relationships remain undeveloped. Piñeiro jumps from sequence to sequence without staying long enough for us to get to know them as human beings. Though the episodes are labeled “one month earlier,” “three months earlier,” and so forth, the flashbacks are confusing as to time and place and are difficult to follow. If we are left uninvolved in Camila’s various attempts at personal connection up to this point, we are definitely engaged in her search for a deeper experience that leads to a reunion with Horace (Dan Sallitt, “Honeymoon”), the estranged American father whom she had never met.

Though Hermia’s father Egeus in “A Midsummer Night’s Dream” is a demanding parent who insists that she marry Demetrius and forego marrying her love for Lysander, Horace is not Hermia’s authoritarian father but the reverse. In a visit to his home in upstate New York, the two exchange a series of intimate questions, playing a game of you ask, I tell, then vice versa. The conversation maintains a tone of civility and we get a more rounded picture of Camila, but the film drifts slowly but noticeably into melancholy.

Piñeiro has said about Hermia and Helena that, “Many plot elements remain somewhat hidden. Instead, you focus on the atmosphere that springs from the characters’ encounters with each other.” While the atmosphere is always present for us to focus on, the “somewhat hidden” elements of the plot border on obscurity and ultimately detract from our ability to understand the characters. According to the director, “Not everything is connected to everything.” This was also true in my experience. 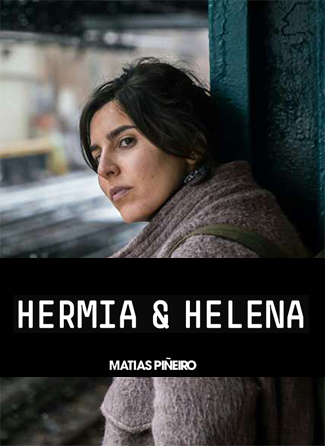