There exists no alternative in critiquing James Steven Sadwith’s Coming Through the Rye without first discussing the novel which both its title and story derives from. Personally speaking, I never finished reading The Catcher in the Rye. Despite the national uproar that the novel stirred by its addition to school curriculums in the United States, the novel’s audacity has become enervated by the passage of time, often feeling quainter than its reputation as one of the most challenged books of all time would have you believe. As a love letter to J.D. Salinger’s most famous novel, Coming Through the Rye speaks often of affectionately interpreting Salinger’s work rather than adapting the difficult novel, which is why it isn’t simply named after the novel on which it is very loosely based upon. For this reason, as a critic who has little experience with the original novel, it stands in the film’s favor that it remains a moving account of existential uncertainty and adolescent angst that can transcend its source material to become an enjoyable teen dramedy.

Set in the late sixties rather than the late forties, Coming Through the Rye follows Jamie Schwartz (Alex Wolff, “My Big Fat Greek Wedding 2”) as he begins his first year in Crampton boarding school. Both alienated and humiliated by his peers, Jamie consoles himself exclusively through the pages of J.D. Salinger, professing himself as the living embodiment of the novel’s protagonist, Holden Caulfield. His fanaticism with the book inspires him to adapt it (though Jamie would rather say interpret it) into a play which he then hopes will become a film where he can star as Holden. However, Jamie must seek permission to perform his play from J.D. Salinger himself (Academy Award winner Chris Cooper, “Adaptation.”) who has gone into seclusion without any form of personal contact. With the help of a young girl named Deedee (Stefania LaVie Owen, “Krampus”), Jamie takes it upon himself to run away from Crampton in search of Salinger in the belief that finding him will give understanding and meaning to his life.

As the film begins, it explains that “a lot of this is inspired by real events if you want to know the truth” and such a lovingly cheeky attitude permeates throughout. It’s difficult to differentiate between aspects taken from Salinger’s novel and those from real life, so intertwined are both sources in a fantastic script by James Steven Sadwith himself. In a sense, the film is an adaptation, borrowing heavily from many of the novel’s ideas and even replacing many of the colloquialisms made famous in Salinger’s original with their counterparts in the late sixties. But Sadwith excellently brings across the personal sentiments in the film’s story, caring less about The Catcher in the Rye itself and more towards the novel’s impact on teenagers with a sense of deep affliction and uncertainty.

In a story that heavily depends on character, it’s refreshing to see such a well-crafted and multi-dimensional protagonist such as Jamie Schwartz. Sadwith, now at 63 but writing and directing his first theatrical film, gives a compassionate but nuanced portrait of Jamie, made possible only with the benefit of experience and hindsight. Jamie’s quandaries are legitimate and he’s easily sympathetic, but that doesn’t exonerate the adolescent from any apparent flaws. Jamie is pretentious, egocentric, and deluded. So are many teenagers and adults for that matter. His demeanor can change on a whim with the erraticism expected from a teenager.

At eighteen years of age, Alex Wolff performs exceptionally in helping to establish the many facets to Jamie’s character, delivering with a surprising nuance that might’ve escaped notice from actors of a similar age. The tenderest moments in Coming Through the Rye stem from the chemistry between Wolff and the equally exceptional Stefania LaVie Owen as Deedee. Their characters often share many first sexual encounters together, and both performers deliver a touching intimacy to these scenes. There’s a bashful and awkward quality during these moments that makes them both beautiful and honest to witness. Both performers show a lot of promise and potential here, as it’s through both Wolf and Owen that much of the personality and sincerity that the film strives for is achieved.

Of course, there are noticeable problems as well. While Jamie’s fourth wall breaks are cute in the beginning, their absence from the remaining story only highlights how extraneous those breaks were. Likewise, the narrative blueprint of a typical road trip movie often impedes much of the enjoyment to be had throughout the running time. Any cliché expected from countless road trip movies are exhibited here, making the journey Jamie and Deedee take both predictable and dull. While an attempt at mystery surrounding J.D. Salinger and how he and Jamie might see each other is created, the payoff is extremely typical of this kind of film, preferring to be about the journey rather than the destination. It’s weak storytelling in a script that contains many stirringly funny and poignant interactions between its characters.

Despite its compromising flaws, Coming Through the Rye is a film profuse with a personal and sincere attitude that can often be absent in cinema. Not only an intriguing adaptation of a novel assumed unfilmable by its own author, it’s an invitation to look back on someone’s former youth with both nostalgia and critique. However, it also maintains a compassion for teenage angst and pretensions which is heavily reminiscent of the best films by John Hughes. The film has created a mild buzz around various film festivals and has easily deserved the numerous accolades awarded to its cast and crew. If given the opportunity, Coming Through the Rye is a film deserving of such attention and should be seen by anyone who enjoys Salinger’s most famous novel or even those, like me, who don’t.

'Movie Review: Coming Through the Rye (2015)' has no comments 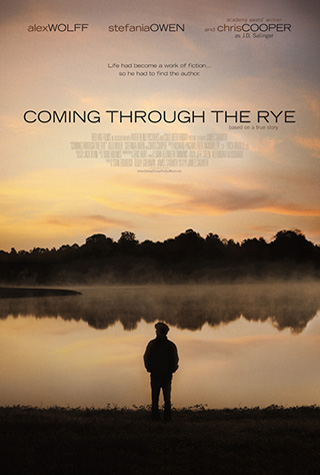