Although some may want a second helping of baklava it is not certain that they would also mind another round of the Portokalos clan in the boisterous but slight familial ethnic comedy My Big Fat Greek Wedding 2. When the original sleeper hit first emerged onto the big screen back in 2002 it was quite a joy to see this exuberant Greek family flaunt its bubbly sense of spirit and identity. However fourteen years later the star of this once celebratory vehicle, the still fetching Nia Vardalos, returns as the spunky Toula Portokalos but the fanfare seems watered down in comparison. Vardalos, who serves as the film’s screenwriter as well, surprisingly partakes in a flimsy family romp that feels flat and noisy without much motivation for its aimless frivolity. While the first film showed a vitality of freshness and impish wonderment My Big Fat Greek Wedding 2 is a transparent shadow of its former self. Hence, this chippy yet recycled romp appears Greek to us as it does not bother exploring any new ground or revisiting other interesting themes.

Certainly no one can accuse My Big Fat Greek Wedding 2 as not being authentic culturally when there are a slew of well-known Greek performers willing to embrace their heritage in an otherwise uneven sequel. Vardalos, Rita Wilson (a.k.a. Mrs. Tom Hanks), Emmy-winning Michael Constantine (from the early 1970’s TV dramedy “Room 222”), Elena Kampouris, John Stamos — all boast their Greek roots in the film which is wonderfully realized. Still, it is a crying shame that My Big Fat Greek Wedding 2 comes off as stale as leftover spanakopita.

There is nothing new to the concept of sequelitis as it will always remain a dependable trend in Hollywood movie-making. However, it is rather bewildering that it would take fourteen years to bring back the infectiously spry “My Big Fat Greek Wedding” to our cinematic consciousness yet never addressing the issue of having the Portokolas pack present something comically fresh or flavored beyond the nostalgically familiar, lighthearted jocularity. Indeed, it is a mighty gamble to wipe dust off of a come-from-nowhere quirky ethnic chuckler from the early 2000’s and expect it to register with the same zesty sentiments from yesteryear.

At the time of the initial release of “My Big Fat Greek Wedding,” it was refreshing to witness Vardalos’ account of a young and vivacious Greek woman falling head-over-heels for a handsome non-Greek love interest that tickled her awkward fancy. Furthermore, Vardalos’ Toula had to come to humorous grips with her disapproving brood of a family not accepting her choice of a loving partner as she threatens to culturally “violate” her Greek identification. There was something honestly poignant and gently silly about Toula’s romantic risk-taking and the consequences involving her massive family’s doubts.

Many years of marriage have gone by for Toula and her hunky school principal husband Ian Miller (John Corbett from the old-time classic TV series “Northern Exposure”). Unfortunately for Toula the marital punch has died down a bit in her relationship with Ian. Furthermore, the long-time married couple are raising a headstrong teen daughter named Paris (Kampouris, “Men, Women & Children”). Paris is independent and her parents want her to strive for whatever satisfies her academic expectations and other ambitions. Naturally this does not sit well with Paris’ old school grandfather Gus (Constantine) whose traditional ways insist that as a young Greek girl she needs to settle down with a Greek man and produce babies. Yikes!

Poor Paris. She seems engulfed by her extended family as they want to dictate her every move. For starters, her relatives want her to attend college locally in Chicago although Paris has plans for schooling back east in New York. Toula is totally supportive of her young daughter, but Paris cannot help but be embarrassed by her at times. As if Toula does not have a full plate in dealing with her shaky marriage and striving for her daughter’s approval — she also has to witness the shocking news that her father Gus and mother Maria (Lainie Kazan, “You Don’t Mess with the Zohan”) may have a questionable marriage courtesy of an unsigned marriage license. And yes . . . Toula is tied to her demanding Greek family with no apparent escape in sight.

For the most part, My Big Fat Greek Wedding 2 has its amusing anecdotes as it explores the realm of Greek culture to the point of no return. Also, it can be said that some might find the movie exhaustive in its stereotypical skin as well. The displaying of a loud Greek family in the Portokalos household not to mention antiquated notions about perceived beliefs from the old country may intrigue some but infuriate others. Nevertheless, Vardalos’ Toula manages to be the charming centerpiece that holds the otherwise sketchy My Big Fat Greek Wedding 2 together. It has its sentimental and silly-minded moments but it cannot overcome the repetitive and bland stamp of its comical convictions either.

Director Kirk Jones (“What to Expect When You’re Expecting”) oversees an innocuous ethnic serving of rehashed Greek salad that has been tossed once too many times. Perhaps My Big Fat Greek Wedding 2 will entice its avid followers to take a trip down memory lane and rejoice in the frothy foundation of a garrulous Greek family stuck in their disciplined mindset of unity and chaos? Again, feel free to grab another baklava, but the aftertaste of this wedding calls for an immediate annulment from this bouncy, bickering bunch. 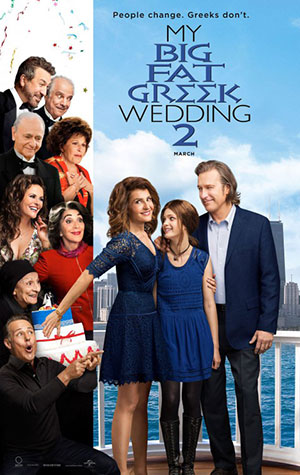