When I learned that the movie Get A Job had been shelved for four years by Lionsgate because of distribution issues, I couldn’t help but wonder why. After all, it sports a talented and recognizable cast who, as mostly millennials themselves, should have no problems tackling a coming of age comedy. Miles Teller, Anna Kendrick, Alison Brie and film veterans Bryan Cranston, John C. McGinley and Marcia Gay Harden, have all proven their mettle. After having watched it, however, I’m sorry I wondered at all.

The film starts off as a college-aged comedy, similar to previous efforts like “That Awkward Moment” or “21 and Over” (two films that ironically also star Miles Teller). Our main character is recent college graduate Will Davis (Teller), a guy who is every bit as charming as he is naive. He sincerely believes the world is his oyster, as he prepares to jump into the ultra-competitive job market flooded with post-graduates.

His girlfriend Jillian (Kendrick, “Into the Woods”) shares his enthusiasm, but has a solid job position waiting for her on the other side. Will’s parents, proud and congratulatory, proceed to hand over a grant of sorts to make sure their son has a solid leg to stand on until he finds his first gig.

As their individual arcs are set and the film begins to take off, there is a sense that director Dylan Kidd wants to present a fresh (or at least a semi-fresh) take on the hardships of society from the perspective of young adults trying to get a start, but what the audience receives is a film with potential but no purpose.

Don’t get me wrong there are a few positives to take away from Get A Job. Although when it was made Teller wasn’t exactly a leading man, he steps up comfortably to the role (partially due to the character having similar traits to some of his other characters in other films as previously mentioned). And seeing fill-in actors Christopher Mintz-Plasse and Brandon T. Jackson was fun, and they actually played likable, albeit over-the-top, characters. Jackson, a business student eager to get his foot in the door, and Mintz-Plasse a tech-savy app creator willing to go the extra mile to get noticed. Both of their performances, along with Teller’s, are the more memorable take-aways from the film.

Overall, what we have here with Get A Job is an observant film with promise, that just can’t escape the cliché’s of young adult comedies. It’s best moments are the introductions of its characters, but once the development is complete nothing is done with them that can be remotely construed as “real.” It’s too bad because not many films can boast a cast this talented, but a lot of films have scripts with this many mistakes. 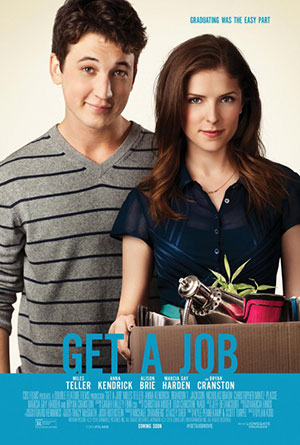