While we are now awash in public expressions of hysteria directed towards Muslims, the voice of fear in American society has always been there in one form or another. Witness The Chinese Exclusion Act of 1882, the forced removal of Japanese-Americans to internment camps during World War II, and the on-going discriminatory laws against blacks and gays. In Trumbo, director Jay Roach (“The Campaign”) reminds us of another period in American history that mocked the values the country was founded on, the anti-Communist witch hunt of the late 40s and early 1950s.

Based on the book by Bruce Cook with a screenplay by John McNamara, Trumbo is a biography of Dalton Trumbo, one of Hollywood’s highest paid and successful screenwriters with such films to his credit as “Kitty Foyle” (1940), “Thirty Seconds Over Tokyo” (1944) and “Our Vines Have Tender Grapes” (1945). Using archival footage and reenactments, the film focuses on Trumbo’s life and career beginning with his testimony before the House UnAmerican Activities Committee in 1947 which was a result of his membership in the Communist Party from 1943 to 1948. The film dramatizes his appearance before the Committee, his conviction for contempt of Congress for refusing to answer questions, his prison term of eleven months that began in 1950, and his struggle to survive after being released.

Trumbo, portrayed by Bryan Cranston (“Godzilla,” “Breaking Bad” TV series) was blacklisted as one of the Hollywood 10 and forced to write movie scripts under assumed names such as Robert Rich and Ian McLellan Hunter, two of which, “Roman Holiday” and “The Brave One,” won Oscars for Best Screenplay. In depicting Trumbo’s life during and after the blacklist, we are introduced to some prominent Hollywood personalities who played a role in his life. Among these are the witchy anti-Semitic gossip columnist Hedda Hopper (Helen Mirren, “Woman in Gold”), who threatens Louis B. Mayer that she will remind her millions of readers of the producer’s Jewish background if he takes sides in a labor dispute, the holier-than-thou John Wayne (David James Elliott, “Dawn Patrol”), and the duplicitous Edward G. Robinson (Michael Stuhlbarg, “Steve Jobs”).

There is also the fictional character of Arlen Hird (Louis C.K., “American Hustle”) who serves as Trumbo’s conscience when he wavers. Countering Trumbo’s stilted movie talk, Hird asks him, “Jesus, do you ever say anything that isn’t gonna get chiseled on a rock?” One of the film’s more noteworthy scenes is the confrontation between Wayne and Trumbo who points out to “Duke” the gap between his phony on-screen all-American image and the reality of his wartime activities. There is also a look into Trumbo’s domestic difficulties as his non-stop work schedule alienates him from his wife Cleo (Diane Lane, “Every Secret Thing”) and his three children. To make a living, he was compelled to work for schlocky Grade B directors Frank King (John Goodman, “The Monuments Men”) and his brother Hymie (Stephen Root, “Selma”) who hired blacklisted writers who were willing to work for cheap.

When the blacklist was finally broken, it was in large measure due to director Otto Preminger’s (Christian Berkel, “The Man from U.N.C.L.E.”) and actor Kirk Douglas’ (Dean O’Gorman, “The Hobbit: The Battle of the Five Armies”) courage in hiring Trumbo to write the screenplay for the movies “Exodus” and “Spartacus.” Trumbo is a timely reminder of an unfortunate period in American history, and while Cranston succeeds in capturing Trumbo’s humor, obsessive nature, and his principled struggle to maintain his ideals, the film only scratches the surface of the complexities of the man and the period in history and we do not get a clear picture of the consequences of the blacklist in people’s lives, consequences that included marital breakups and even suicides.

Though intertitles at the beginning of the film tell us that many prominent people in Hollywood joined the Communist Party, Roach generally plays it safe, remaining silent about Trumbo’s motivation for being a Communist. The only attempt to explain what Trumbo stood for is a pathetic response to his daughter Niki’s (Elle Fanning, “Maleficent”) questions to her dad about communism, comparing it to sharing a sandwich with needy friends at school. I guess capitalism would be defined as selling the sandwich. “If every scene is brilliant, your movie will be monotonous,” Trumbo says at one point to “Exodus” director. No chance of monotony here. 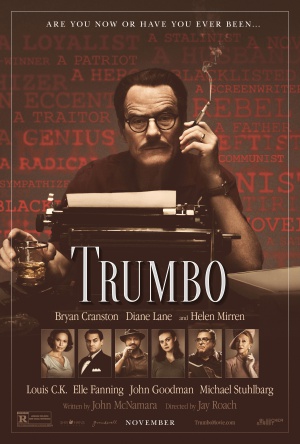