Every Secret Thing begins with a birthday party — a pool party. 11-year-old Alice is thrilled to have been invited, but she’s really annoyed that her mother makes her bring Ronnie along. Ronnie is weird, quiet, and awkward, and she’s stalling Alice’s plans to be a popular girl. Also, Alice really doesn’t like that her mother (Diane Lane, “Man of Steel”) dotes on Ronnie, so while she obeys, she tries to keep her distance. At the party, Ronnie is ostracized and ridiculed, and after a small confrontation with the birthday girl’s mother, Ronnie is told she has to leave and bring Alice with her. Infuriated and humiliated, Alice dejectedly walks home with Ronnie, and on the way, the girls notice a stroller left on a porch, and discover an unattended baby inside.

The opening credits roll with images of newspaper headlines announcing a missing infant, the subsequent search, and the tragic discovery of her remains, coupled with the arrest of two young girls charged in her kidnapping and murder. The film picks up seven years later, shortly after Alice (Danielle Macdonald, “Trust Me”) and Ronnie (Dakota Fanning, “Night Moves”) — now 18 — are released from their incarceration. Alice is insistent that she is innocent of any wrongdoing — even writing to TV producers pitching a show about wrongfully convicted criminals. Still enamored by the idea of being popular, she’s convinced that once people hear her story, they’ll properly understand her and will want to be friends with her. Ronnie, on the other hand, has kept her distance from Alice, keeps a low profile, and gets a job in a small café.

At the same time, in a furniture shop nearby, a 3-year-old girl goes missing, and Detective Nancy Porter (Elizabeth Banks, “The Hunger Games: Mockingjay – Part 1”) is assigned the case. She is haunted by a case she worked on as a rookie — the disappearance of an infant who was taken by two young girls. Reminded of the girls’ recent release by the infant’s mother, Porter questions Alice and Ronnie, encounters conflicting stories about what really happened seven years ago, and faces an unnerving mystery she has only days to solve . . .

Based on the novel by Laura Lippman and brought to the screen by director Amy Berg and screenwriter Nicole Holofcener, Every Secret Thing is a look inside the minds of two young girls who didn’t quite fit in when they were young, and are now struggling to find their place in the world as young adults. There’s some really interesting psychology at work in the relationships between Alice and her mother, Alice and Ronnie, and Ronnie and Alice’s mother. Diane Lane gives a fascinating performance as a mother who loves her daughter, yet wishes she was different in many ways. Danielle Macdonald’s Alice is affected by society’s judgment of her size, and claims to want to remedy her own loneliness and desperation, but also seems to contradict every opportunity for that. She doesn’t do herself any favors in the likability department.

The secondary characters, however, only exist to nudge the plot along, and many of them are one-note space-fillers, including Ronnie (played by Fanning, from whom you expect so much more). Lane and Macdonald are more interesting, and their interactions provide slight nuances that help fuel the mystery forward; just like Banks’s Detective Porter, you find yourself studying their eyes and faces, trying to determine who’s being truthful and when.

The plot unfurls carefully, revealing just enough about what happened seven years ago while building a steady progression towards finding the current missing girl. There are times when the editing is stilted and awkward; various jump cuts make changes in character focus and timeline chronology difficult to follow, but eventually, viewers will adjust to what’s happening and when. The solution, unfortunately, comes along a little too easily and leaves a few minor questions unanswered, but overall, Every Secret Thing is still an intriguing mystery worthy of investigation.

'Movie Review: Every Secret Thing (2014)' has no comments 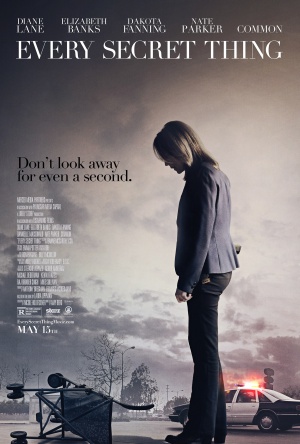