Gavel-to-gavel coverage of the Republican and Democratic national conventions was still being offered by CBS and NBC in 1968, but ABC, lacking their resources, limited their coverage to a few hours in the evening and highlighted it with a ten-night debate between conservative author and commentator William F. Buckley Jr. and flamboyant liberal novelist and playwright Gore Vidal. These debates are chronicled in the powerful documentary Best of Enemies directed by Robert Gordon (“Johnny Cash’s America”) and Morgan Neville (“Twenty Feet From Stardom”).

Though both men had previously run for public office (Vidal for Congress, Buckley for Mayor of New York), their forte was not politics but writing. Buckley was the founder and editor of the influential conservative magazine The National Review, and Vidal was a controversial novelist and playwright whose sexually liberated views were in evidence in his novels “The City and the Pillar” and “Myra Breckinridge.” Both men spoke in the accents of Eastern elites, what Neil Buckley, Bill’s surviving brother, describes as “patrician, languid accents,” yet both were erudite with acid tongues.

To say that Buckley and Vidal did not get along is like saying Bobby Kennedy and James Hoffa were not the best of friends. Vidal knew that Buckley had supported using nuclear weapons against North Vietnam and China, and called him “a bloodthirsty neurotic,” while Buckley retorted, “We all know that your tendency is to be feline.” The Democratic Convention was held in Chicago where protests against the Vietnam War and the subsequent police overreaction threatened to derail the nominating process, creating a highly-charged atmosphere for the debates that only enhanced the acrimony.

One of the highlights occurred in the ninth of ten debates where the debaters clashed over the extent of the police response against the demonstrators and both stepped out of their well-calculated cool, intellectual personas. The discussion began with the revelation that the police had removed a Viet Cong flag from the demonstration. While Vidal defended the right of the demonstrators to state their political views, Buckley noted that during World War II, people were free to ostracize pro-Nazi spokesman even though they were free to speak their views. Vidal responded by saying that “the only sort of crypto-Nazi I can think of is yourself.”

Though the moderator Howard K. Smith warned both men against name calling, a red-faced Buckley, his hands trembling, shouted, “Now listen, you queer, stop calling me a crypto-Nazi or I’ll sock you in your goddamn face, and you’ll stay plastered.” It was a moment that Buckley regretted, though the feud continued with competing articles in Esquire Magazine and subsequent law suits. Best of Enemies is provocative and terrific entertainment but while the edited debates are pure theater, full of witty banter and relentless thrusts and parries, they are less than illuminating as a contribution to the troubling issues of the time and include no discussion of the most important issue of the day, the Vietnam War.

Although issues such as economic inequality, foreign involvements, and issues of morality and culture were discussed, the debates were not a conflict over positions on issues as much as they were a battle between two individuals convinced the other was a threat to the health and well-being of the country.

Many commentators in Best of Enemies are full of nostalgia for the day when intellectuals were seen on television and point to today’s cable news pundits screaming at each other (rather than the corporatization of the media and the over-dependence on ratings) as evidence of the decline of American television, but if the Buckley-Vidal debates are an example of the intellectual vitality of television in the sixties, I think I’d rather stick with Rachel Maddow. 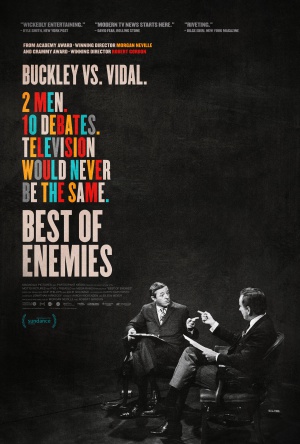