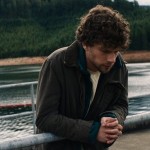 With one’s own thoughts.

Night Moves, the latest film by Kelly Reichardt (“Meek’s Cutoff”), is a personal story about three young people attempting to impact a society in which they no longer feel a part. Frustrated by continually escalating threats to the environment and by the deafness shown by political leaders, Josh (Jesse Eisenberg, “Now You See Me”) an organic farmer who lives in an agricultural cooperative in Oregon, Dena (Dakota Fanning, “The Last of Robin Hood”) a young college dropout with considerable family wealth, and Harmon (Peter Sarsgaard, “Green Lantern”), an ex-Marine with expert knowledge of explosives, decide to blow up a hydroelectric dam as a protest against the desecration of the environment.

According to Reichardt, “Their rash choice is from a place of just wanting to feel a part of it. The three characters are all looking for that kind of connected feeling and this is their way of feeling plugged into the world, and plugged into the movement and activism.” There are no polemics or speeches in the film and no stated justification for the action other than Josh’s belief that it “will make people start thinking,” and will make a statement to those who don’t care about “killing all the salmon just so they can run their bleeping iPod every second of their life.” When the film opens, the time for debate has passed and the proposal is now in an advanced stage of planning.

Meticulously, Night Moves follows the three as they buy a boat, consider how to buy an additional 500 pounds of ammonia nitrate fertilizer, and set up the detonation. Reichardt generates tension without peak dramatic moments, only by the deliberate unfolding of the evolving plan and the potential dangers it entails. Divided into the planning and execution of the bombing and its resulting consequences, the film is a study of encroaching paranoia. As the three separate and agree to return to their lives and not contact each other, the news that a camper, a husband with two children, has gone missing leads to Dena’s growing panic and Josh’s increasing concern that she will betray the group.

Though one of the key plot points feels unconvincing and out of character, Night Moves is a strong film in practically every aspect: Direction, performance and cinematography, but it is a film permeated by an overriding sadness that goes beyond the personal consequences to each character, encompassing more a sense of loss that the human involvement of people fighting for a cause has been replaced by lonely, desperate acts of conscience that are poorly thought out and alienate the people they are trying to convert.

Like Sidney Lumet’s 1986 “Running on Empty,” a film about the consequences of acts of civil disobedience, the film does not judge the actions of the characters nor justify them. Though as the director has said, Night Moves is more of a character study than a political statement, unfortunately, some may come away with the idea that environmentalists are paranoid zealots who care little about the ultimate consequences of their actions. That would do a disservice to both the film and to the majority of environmentalists working tirelessly to support the planet. 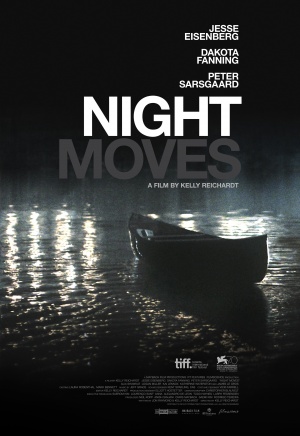