A sacred bond between sisters, no matter how close they seem, takes a lifetime to build. Through this intricate construction of a relationship, a deep sense of trust, intimacy, and selflessness are formed. Those key ingredients are the basis for unconditional love and without it, there is the highly probable potential of having a relationship that seems fine when, in actuality, it’s hollow. Writer-director Diane Bell (“Obselidia”) explores these universal dynamics of sisterhood in her new film Bleeding Heart, which ultimately becomes an American story that reaches across the aisle in its socio-political landscape by trying to empower women and remind its audience of their right to bear arms.

A message like that needs a representative to push its agenda through and the story finds a seemingly winning cover girl in Jessica Biel (“Hitchcock,” “Playing for Keeps” and “Total Recall”). When we first meet her character, May, she is on edge — until the story pulls back the curtains of her life and reveals that she’s normally a peaceful person. Despite the present life she has built for herself as a successful yoga teacher with the love and support of her boyfriend Dex, who’s played by Edi Gathegi (“Aloha”), she yearns to build a connection with the things of her past — which mainly consists of her half-sister, Shiva, who’s played by Zosia Mamet (“Girls” TV series). But when May discovers that Shiva is a prostitute and is stuck in an abusive relationship with her boyfriend-pimp Cody, who’s played by Joe Anderson (“Hercules”), she decides to take matters into her own hands.

Within its storytelling framework, Biel’s character transformation is curious. She goes from being a naïve, but well-meaning 30-something to a reckless naïve, but well-meaning 30-something. The story clumsily places us on a quest for her true identity with didactic yet shallow scenes of a rapport between two sisters that never truly come to life. It aims to be a simplistic thriller, but instead, it comes away with lackluster results; undercutting the decent performances among its cast. It must also be noted that the sensibility of simplicity isn’t the issue here. It is the sensibility of a plot that misuses simplicity as a form to get from the beginning to the end without any surprises or wonder along the way.

Stylistically, the film’s somber and uneasy atmosphere that’s conveyed in its cinematography and ambient score seems out of place. The film has the cinematic appearance of a gritty gangster epic rather than the presence of a mild-mannered suburban indie-drama. This nature brings a false sense of weight and heightened emotion that ultimately adds nothing to its narrative. At its core, the film tries to take on the issue of domestic violence by trying to not look like a cheesy, yet super long public service announcement — and to some extent, it actually succeeds (sort of). Although, it is unable to escape the dangerous pitfalls of easily being a glorified Lifetime Original TV movie.

For my taste, why Bleeding Heart isn’t anything other than a short film is beyond me. From the stale tale of two sisters to the dull . . . well, everything else, a lot of its problems would be better contained if it were conceived in a more concise form. This doesn’t mean that the story would be better, but it would be clearer. It isn’t until the story’s climax when the film suddenly shows a sign of suspense (and it’s an incredibly faint one). Obviously, it is for this point why the film becomes “worth seeing” because in a traditional plot, the climax is where the weak protagonist becomes the strong hero. However, under this narrative’s dark circumstances, the meek civilian not only transforms into the meek vigilante, it also produces an unsettling new truth: The beauty . . . has now become the beast. 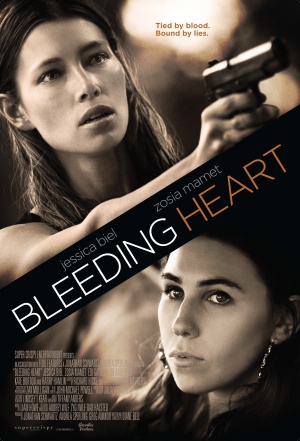