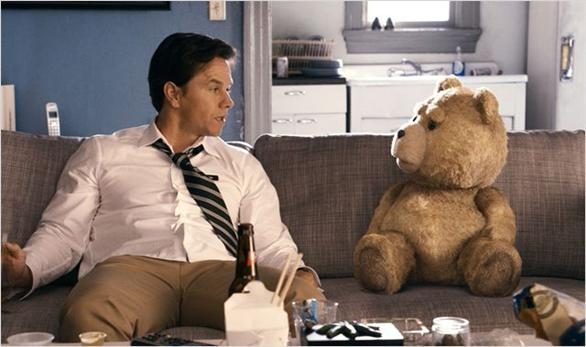 I went into Ted with much trepidation. Not so much because it starred a cursing, drug abusing teddy bear, but because it emanated from the mind of Seth McFarlane. You see, I don’t like to be pandered to and McFarlane has become a shill for the Democratic Party, using his once hilarious animated program, “Family Guy,” as a left-wing propaganda piece. (His atonement attempts with “American Dad” and “The Cleveland Show” leave a lot to be desired).

But, to my pleasant surprise (due in part to my open-mindedness), I really enjoyed this farcical comedy which has vibes of earlier “Family Guy” episodes. Ted, it turns out, is one of the few comedies released in the past few years that will make you laugh. More often than not, it will make you laugh out loud.

Ted tells the story of John Bennett (Mark Wahlberg, “Contraband“), who, as a boy (played by Bretton Manley), receives a Teddy Bear for Christmas. Lonely and friendless, he makes a solemn wish that the toy would be his friend forever. And, of course, in movies like this, the wish comes true and the bear comes to life — complete with the voice of Peter Griffith (McFarlane). Amazed (and almost shocked to death), John’s parents (Ralph Garman and Alex Borstein) grudgingly accept the miracle of a living stuffed animal, and Ted becomes famous for a while — he appears on the covers of dozens of national magazines and is the subject of many TV and radio interviews. Included in this is a great clip of his appearance on the “The Tonight Show Starring Johnny Carson” (think “Forrest Gump,” here). 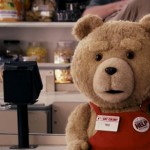 But fame comes with a price and with the advent of instantaneous journalism Ted is subjected to more and more embarrassingly funny moments (such as a public arrest in an airport for smuggling “mushrooms”). John during this time does not fare much better and the duo spend much of their adult lives getting drunk, high and watching reruns of the old “Flash Gordon” TV series. John does, however, manage to somehow attract the beautiful and successful Lori (Mila Kunis), who somehow is able to endure his (and the bear’s) vapidness, immaturity and complete irresponsibility.

The laughs come a mile-a-minute in Ted, with some — like from a hilarious party scene where John and Ted meet Sam J. Jones of “Flash Gordon” fame — being heartier than others. The surprising cameos along the way are a big plus, as are the “loving pokes” at past and present American pop culture. In a darker subplot, Giovanni Ribisi, as a father who wants to kidnap Ted for his son is funny in a creepy sort of way. McFarlane, who also co-wrote with fellow “Family Guy” scribbler, Alec Sulkin, deserve a lot of credit for taking an idea that is dumb on the surface and crafting a crude and heartwarming tale that works. (McFarlane deserves some credit for giving employment to many of his television show staff too — Kunis (voice of Meg Griffith), Patrick Warburton (voice of Joe the Cop), Borstein (voice of Lois Griffith) and Patrick Stewart (the narrator and voice of the CIA Director in “American Dad”) all earn a paycheck in Ted).

Be warned, though, Ted is filthy. For its 106 minute running time, it doesn’t let up and, truth be told, after sitting through it I wouldn’t have wanted it any other way. 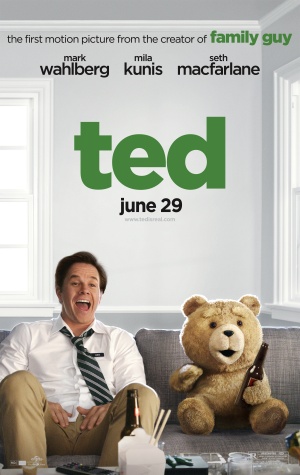