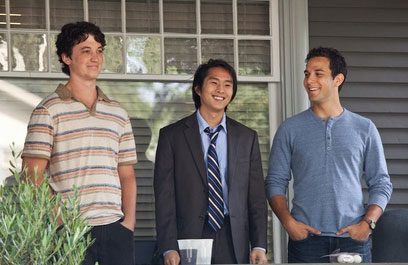 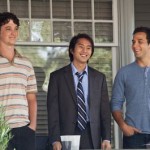 After enduring a series of movies over the past two months so bad that the word “bad” is woefully inadequate, I thought I might have reached the nadir with such titles as “Playing For Keeps,” “The Last Stand,” “A Good Day to Die Hard,” “Hansel & Gretel: Witch Hunters,” “Parental Guidance,” and other works of low quality — that is until I was forced to view the latest comedic travesty that is 21 and Over.

Relativity Media’s attempt to make a juvenile “The Hangover” meets “Animal House” meets “Revenge of the Nerds” succeeds only in the juvenile part and co-directors (and scribblers) Jon Lucas and Scott Moore (“The Change-Up“) seemed to have thrown any attempt at humor out the window, replacing that emotion with mind-numbing violence, racism, nauseating nudity, misogyny and unabashed stupidity. In fact, this was the first movie since 2009’s “Observe and Report” to actually make this critic physically ill.

I’m not sure if the upset stomach was because I was already a tad woozy from the flu, but the splitting headache was no doubt caused by this production which stars absolutely no one and elicits no laughs whatsoever, unless one finds things like projectile vomiting, urinating on people, being drunk and stoned to the point of annoyance, being spanked with a cricket bat, automobile accidents, people being thrown from balconies and beaten senseless, animal abuse, making fun of the mentally ill, parental violence and, probably worst of all, a throbbing and brain tumor-inducing rap soundtrack that pulsates ceaselessly throughout this unmitigated disaster, fun.

And while I knew I wasn’t going to see Shakespeare with this picture, it doesn’t mean I wanted to see a pile of crap, either. In fact, 21 and Over was made for individuals with mental ages of ten and under.

I suppose some explanation of the pointless plot is in order, so here it goes. Viewers are first greeted with a shot of two naked guys and their red and beaten butts — and things go downhill from there. We see longtime buddies Miller (Miles Teller, “Project X,” another vivid example of how today’s youth and unlimited partying definitely does not go together) and Casey (Skylar Astin, “Pitch Perfect“) travel to an anonymous college town to visit a third chum, the super brainiac, Jeff Chang (Justin Chon, “Twilight“) to help him celebrate his 21st birthday. It’s too bad they showed up, though, because Chang has a very important interview with a big-time medical school the next day. 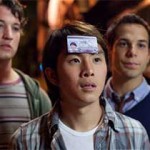 Throwing caution — and intelligence — to the wind, Chang decides to have just “one beer,” but of course, we know the night will escalate into a series of wild debauchery, frat parties, pep rallies (which seem to go on all night) and breaking into a Latina sorority (for no other reason than to add female exploitation and objectification to the mix), all of which leads to arrests, incarcerations and suicide holds. And the laughs keep coming, friends.

Even the inclusion of a tepid romantic triangle between Casey, Nicole (Sarah Wright, “Celeste and Jesse Forever“) and her cheerleader boyfriend, Randy (Jonathan Keltz, “Prom“) brings nothing but cringes to the table. Then, after all of the completely lame attempts to squeeze any kind of laugh from this effort, we’re supposed to care when the movie decides — at the last minute — to send us some kind of message. It’s way too late and I am far too ticked off to care at this point.

If 21 and Over is ANY kind of example of how today’s American youth gets its jollies, I am perfectly content to either move to a Third World country or just be content to just live in the past.

Either choice is better than this monstrosity.