Jean-Paul Sartre famously wrote that hell is other people. Ben Wheatley and Amy Jump’s adaptation of J. G. Ballard’s 1975 novel takes this premise to its (il)logical conclusion, as, in an ironic twist on the title, High-Rise depicts a steady descent into class war-induced delirium, as social and financial divisions steadily turn the eponymous building into an Infernal Tower rather than a towering inferno.

Set in a 1970s that one can imagine happened/could happen/is happening, the film begins ominously, with physiologist Dr. Robert Laing (Tom Hiddleston, “Crimson Peak”) narrating his satisfaction with his current surroundings. Laing’s calm tones are at odds with the squalor and anarchy around him, and serve to set the scene as the film flashes back to three months earlier, and Laing’s initial move into a sophisticated new tower block. The block is equipped with modern conveniences galore, including an on-site grocery store, gym, tennis and squash courts and swimming pool. Better still, or more ominously, there is no end of colorful neighbors. These neighbors include Charlotte Melville (Sienna Miller, “American Sniper”) who, from her position immediately above Laing, first discovers him in a state of undress, which will doubtless please fans of a naked Hiddleston. From the lower levels come the Wilders, Helen (Elisabeth Moss, “Truth”) and Richard (Luke Evans, “Dracula Untold”), she heavy with child and he heavy with ideas for a documentary he has apparently been working on for years. Both, however, are laden with resentment and frustration at being confined to the lower levels, while the higher folk lord over them. Atop this monument to class stratification sits architect Anthony Royal (Jeremy Irons, “Race”) and his wife Ann (Keeley Hawes, “The Bank Job”), lord and lady of the penthouse manor, complete with lackey Simmons (Dan Renton Skinner, “The Kennedys” TV series), roof garden, sheep and horse (no, really).

The extravagant privilege of the upper levels sets the somewhat absurdist tone of the film. This continues in the straight-faced presentation of other aspects of the building. Wide-angled tracking shots depict characters walking in slo-mo from right to left, in the grocery store, out of the building across the car park, beside the pool. Slo-mo appears elsewhere such as the lurid parties held by the upper floors, which become steadily more ridiculous as the film progresses, both in concept and execution. Mark Tildesley’s intricate production design varies between the different levels. The Wilder’s flat is the most homely, with soft yet battered furnishings and the clutter of family life. Melville’s is more opulent, with a plush rug and sharply angled terrace furniture, ideal for a mid-dinner tryst between her and Laing. The Royals’ apartment is exactly what their name implies — luxuriant carpets, grand works of art and that most expressive feature of wealth and privilege, a sunken living room with the couch integrated into the floor! In the midst of all this class clutter, Laing’s apartment remains Spartan, the installed kitchen units part of the brutalist architecture while his own possessions are limited to (unopened) boxes of books and a mattress on the floor.

Laing’s furnishings are expressive of his character as, throughout the steadily increasing debauchery, he maintains a cool detachment seemingly at odds with his fellow residents loss of their grip on reality. Hiddleston is mesmerizing in the role, his eyes conveying both compassion and a sense of superciliousness. His attitude mirrors that of the viewer, who can pity those who suffer, especially Helen, largely neglected by her husband and carrying such an obvious burden. Yet the viewer may also consider themselves, like Laing, to be separate from the madness on screen. At the same time, however, the message of High-Rise is as subtle as a husky in body armor — class barriers are bad. The viewer knows this and the film claims that we are no more separate than Laing, who does go as mad as the others just more quietly. Unfortunately, the film’s continual hammering home of its blunt message does become patronizing. It may seem churlish to criticize the film for its excess when that is largely the point, but the final act of the film does become monotonous. Oh look, someone going mad. Oh look, someone else who is mad. Oh look, some hedonistic sex. And there’s some more. Here is some depraved cruelty. And here is some more depraved cruelty. There could be wry amusement in seeing thoroughly unlikable people encounter various horrible situations, but the film’s straightfacedness here works to its detriment. It is neither sympathetic nor cruel towards its characters, which leaves the viewer in a slightly confused state of wondering why we should care.

Despite these problems, overall the film works because Wheatley does not judge the class division nor offer solutions. While it might have been more effective to explore the reasons behind the various strata in more depth, the film’s commitment to its class-induced delirium is commendable. High-Rise may not be a great place to live, but it is interesting enough to visit. 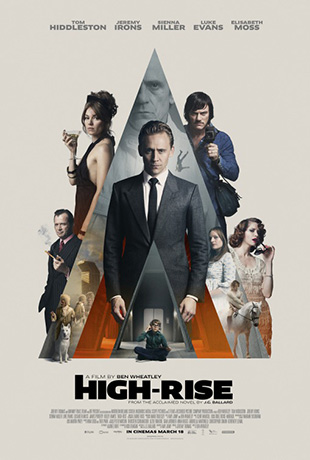