As a screen icon, Dracula has been reinvented over and over again. And many more overs. He’s been everyone from Bela Lugosi to Judas Iscariot and fought veteran vampire killers that range from the brilliant Buffy to the middling Blade at his lamest. He’s drawn the acute attention of such filmmaking masters as Murnau and Coppola and was the classic Universal Monster series’ first creature to step into the world of sound. Yes, the character has been around. And now he’s back in another reinvention fit for the times, cheesy and sympathetic as they are.

The current Hollywood blockbuster approach is written all over Universal’s Dracula Untold. Taking several pages from the ubiquitous superhero subgenre that currently rules the multiplexes, writers Matt Sazama and Burk Sharpless have positioned the latest take on Bram Stoker’s infamous bloodsucker as an origin tale with the titular character as the protagonist. Vlad the Impaler (Luke Evans, “The Hobbit: The Desolation of Smaug”) is a prince with a gory past here, now settled down and doing his best to protect his family and the people of Transylvania from bullying Turkish forces.

When the Sultan Mehmed (Dominic Cooper, “Need for Speed”) that Vlad once knew comes looking to round up the young boys of Transylvania with plans to send them to war, even going so far as to request Vlad’s son, the good prince becomes desperate for a way out. In a convergence of convenience, he decides to visit the monster he recently met in a cave on a mountain, a creature of the darkness that our hero is confident can grant him the power he needs to vanquish his enemies. It’s obvious where this is going, aiming for an efficient workaround to getting human Dracula to become undead Dracula without making us hate the guy.

It’s all a bit silly, but still more interesting than seeing the Stoker story simply rehashed for the umpteenth time. One reason that famous monsters like Dracula endure for so long is that they continually inspire these new interpretations and provide such a long list of identifiers that filmmakers can pick and choose what aspect of the mythology fits their version. Dracula Untold isn’t exactly a refreshing movie in terms of the current mode of the Hollywood machine, but it holds on to some semblance of entertainment value by being an unusual look at the character himself.

Taking place long before the likes of Jonathan Harker or Abraham Van Helsing would ever come into Dracula’s life and transforming the guy into a selfless do-gooder whose chief concern is protecting those he loves, Dracula Untold certainly represents a more sensitive, less gothic response to the character. Unfortunately, that sensitivity turns to mush in director Gary Shore’s hands. A love story between Vlad and wife Mirena (Sarah Gadon, “Enemy”) is endlessly hokey, a concoction of cloying clichés. Gadon has a timeless beauty about her that makes her seem right at home in the royal period setting, but try as she might to hint at a steeliness in darker moments, her character is little more than the worried wife stereotype.

Where Shore does prove to have some promising talent is in the crisp imagery. The look and style of Dracula Untold is far removed from the shiny, cartoonish quality that Stephen Sommers brought to “Van Helsing,” Universal’s previous attempt to raise from the dead their classic monsters. This one has a muted beauty about it, a chilly realism where even the CGI is made to look old, lived in. Some of the digital effects remain too obvious to give the attempt much weight at times, but there remains a sense that this is a world more beholden to tangible geography than animated pixels.

There’s also a memorable depiction of vampire vision, a sort of X-Ray sight that desirably illuminates the pulsing innards of any breathing organism as a floating sack of glowing blood. Another example of visual imagination is in the slow motion melting of flesh that occurs whenever the vampires are exposed to their classic arch-nemesis sunlight. All of these things, along with a few creative action shots, are the work of a new filmmaker trying to put his own spin on some age-old tropes and images. It’s an admirable effort, though the good is mixed in with other bits that are so recycled they somewhat dilute the positives. It’s a little tough to understand why Shore couples his decent ideas with stuff like an emotional plunge scored to a generic choral track.

This is the conundrum that Dracula Untold faces at various turns. Where the movie succeeds, it also fails. What makes the movie most interesting in its take on the famous vampire is that it ventures to move the monster into the hero role, but when you take one of the great fictional villains of all time and make him a good guy, how do you replace him in the role of the antagonist? It’s a problem that grows and festers here because this Dracula is still a conventional picture that needs a bad guy to root against and ultimately defeat. Cooper’s Mehmed is a bland foe, though, and never given much screen time to do more than spew forgettable rhetoric or simply look annoyed.

Supporting players are almost entirely underwhelming here, which means Cooper is not alone, but Evans mostly is. The star has a fine presence and a mysterious aura about him that makes him a little dangerous and convincingly brooding without shrouding his inherent likability. Still, it’s tough to carry an action movie on your own, even if you’re the world’s most infamous bloodsucker. Only Charles Dance (“Underworld: Awakening”) makes an impression as the ancient vampire happy to pass along his powers. Other characters, friends and warriors, are merely interchangeable.

When it comes to reinventing, revisiting, and rebooting the Dracula character and mythology, there are worse ways to go than what Shore and company have cooked up here. There are better ways, of course, but a creation as ripe for reinterpretation and reimagining as the greatest vampire ever benefits from the sheer volume of attempts to breathe new life into the guy’s undead corpse. Dracula Untold isn’t a particularly original movie considering where it finds inspiration in today’s hero pics, but it is a somewhat original Dracula movie, taking the monster to a place that’s worth visiting for its visuals and awkward moralizing. Dracula is reborn, again and again, and as the epilogue here suggests, he finds a way to fit in with the times, however hokily. That’s talent, the kind that comes only with age. It’s always good to try new things, especially when you’re immortal. 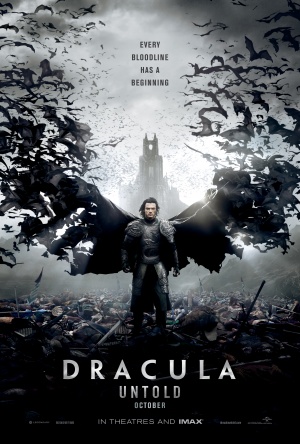