Terror demands attention. Terror, as a matter of fact, directly depends on it. Terror counts on your attention — and it is counting on you. The logic of terror follows Freddie Krueger’s logic (Craven’s original Nightmare): If the victim stops paying attention, the monster dissipates in thin air — or so we may be inclined to think. Once in a nightmare, always in a nightmare. The point is that a terrorist has no cause if the terrorist fails to grab their target audience’s attention, pretty much in the same way in which the monster of your nightmares has no credence once it stops to scare you. Terror’s true enemy is indifference.

And it is indifference what terrorism hasn’t gotten. There are more and more eyes looking, watching, monitoring, beholding its every move, its every gesture, its every whim and reacting with exemplary fear, scared yet scarcely aware of what — threatened, menaced . . . and rationalizing every form of intervention.

Eye in the Sky is, fundamentally, a movie about intervention . . . and its consequences. Colonel Katherine Powell (Helen Mirren, “Woman in Gold”) has been tracking, tracing and trying to take out of her naughty list an English woman radicalized by her formerly radicalized husband (numbers 2 and 3 on the list, respectively). The British converted, through her husband’s connections, has become quite a prominent member of Al-Shabaab, and they are, most certainly, about to plot their next attack. The movie takes place in one working day, a defining one in Powell’s job. The day we join her is, finally, the day she’ll have the chance to capture these people who, judging by the look of her studio at home, have been almost an obsession of hers. We later learn she’s been after them for more than six years.

The mission then proliferates into different places around the world, from England to Singapore to Beijing to Washington to Vegas to Nairobi, Kenya, where the “real capture” will take place. But the capture is not so, maybe it was never so, but suddenly Powell has the justification to transform the mission into a termination, a determination that doesn’t come without complications. Two things complicate the matter. First: No politician wants to take responsibility for approving a killing mission in a sovereign nation and, more importantly, no one wants to as they know the leakage of the video footage showing what will doubtless result in civilian casualties is more than certain. Second: The drone master (Aaron Paul, “Exodus: Gods and Kings”) in charge of releasing the missile (who had never dropped one before) refuses to do so, particularly after a young girl selling bread at the vicinities of the targeted house appears in view as a more than likely casualty of his shot.

It is upon these two complications that an ethical dilemma of great proportions is tackled and discussed — this latter almost to the point of absurdity. The discussions, one quickly realizes, are guided more by polls than by ethics. The politicians in the British boardroom know very well the impact that the missile will have in their approval ratings, potentially barraging their re-election aims. It is at this point that one starts, inadvertently, to side with the military. When Powell calls her superior, Lieutenant General Frank Benson (Alan Rickman, “Harry Potter and the Deathly Hallows: Part 2”), to change their mission, it is almost risible to see him trying to make a point amidst politicians — much more difficult than any battlefield can prove. Powell waits, Benson pushes, and time ticks: In the meantime, the terrorists are putting on their vests and preparing their de rigeur video before going out and disappearing from the drone’s view. They will likely take two vehicles, move into opposite directions — and there will only be one drone . . . one eye to follow: More effective at stationary targets.

But if one may find oneself siding with the pragmatics of the military (given the urgency of the situation), our view is gradually nuanced not only by the drone driver who refuses to consciously kill a girl, but also because we get to steadily understand that the officials, particularly Powell, also have their own agenda — they are willing to stretch the truth in order to get their shot approved.

Eye in the Sky opens with a quote attributed to Aeschylus (though untraceable in any of his tragedies): “In war, truth is the first casualty.” The quote has been widely attributed to progressive Republican U.S. Senator Hiram Johnson, who reportedly said something of the like at some (equally untraceable) speech — apparently, in quotes, sources are the main casualty. Be it as it may, the quote is more than fairly credited to the Greek playwright and tragedy extraordinaire, for what we are looking at is a tragedy embedded in an ethical dilemma. I would actually venture to suggest that the attribution of the quote might have had dramatic purposes. If I said earlier that this movie is about intervention, now I should point out that intervention is behind every tragic error (or hamartia) since the invention of tragedy (. . . by Aeschylus). Truly truth is what has to suffer when rationalization takes the place of recognition (anagnorisis) and of acceptance (catharsis). And truth is stretched here to the point of being almost comical — were the consequences not as tragic as we know they are.

Gavin Hood’s work (and Guy Hibbert’s remarkable script) reaches its highest peaks in the tension it creates in the viewer: It is the original suspension of ethics. Eye in the Sky grabs our attention because the suspense it produces originates in the characters’ will to suspend their ethical responsibility, override it or pass it along to their immediate superior so as to advance their own careers while masking their actions with the justifications of the points they (particularly politicians) have learned to professionally make. War is a game of rationalizations. This has been one of Hood’s main concerns (and this film is perhaps his best exploring this issue since his gutsy “Tsotsi”). It is not only institutional war, but all kinds of war, all kinds of terror, all kinds of violence that take hostages, first and foremost, those who are less involved in it: Children. Truth has to suffer in order to rationalize that a child most suffer for a higher end. Those taking their decisions at a distance can play with the numbers, estimates, and calculations that the victims will never fully understand . . . because numbers, estimates, calculations have all been fabricated, false, phony fallacies their victims haven’t yet reached the age to deliberately produce for their own ends.

All this tension, however, could not be sustained were it not for the stellar, yet unassuming, performances of Hoods’ ensemble. Of course, Mirren and Rickman shine with a light of their own, moving the tension from one room to the next, imprinting the subtle arrogance of their trades in each line they deliver (including those they text to each other). But the whole cast is as solid as is the script they’re working with. Perhaps the two characters that stand out are the only two who seem to decide based on their ethical standards. The viewer might end up empathizing with one (doomed by his orders: Paul’s contrite 2nd Lieutenant Steve Watts, i.e., the drone master) and admiring the other, the undercover agent risking his life on the ground, doing his best to save those he can (but never renouncing to saving his ass first: The always convincing Barkhad Abdi, “Captain Phillips”).

What Hood brings best out of his cast is the individual and diverse rationalization of power, which translates in an urge to intervene. It is true that if someone is doing something wrong, or is about to do it, one may be ethically inclined to intervene. But when such intervention will translate into another wrong, a wrong one knows will ensue from one’s actions beforehand, then one should consider accepting the wrong as much as accepting one’s impotence — one’s lack of power. Because that is what fuels intervention: The power to intervene. It is one of the hardest temptations to resist, the temptation not to become a savior, if saving ones means, concurrently, dooming others. That’s the whole conundrum: If by not intervening the murderer kills 80 innocent people, they are and remain a murderer; if by intervening we kill one innocent person, we become murderers just as well.

In contemporary warfare, where remoteness has become so ingrained in fighting that battles can be fought without a battlefield proper, pleonasms have done their best to remove language from the reality it designates — the same way in which technology has done its best to remove those who pull the trigger from their actions. In such remoteness, also those acted upon are removed from their suffering. In the very far away land of pleonasms where innocent people become collateral damage detonations have the intended potential of absolute accuracy. In the land we dwell, we know that all detonations have unintended outcomes, that they always spill, they always will, beyond the borders of their target. Still, in the made-up land of terror, urgency is the only timeframe that exists. And bombs don’t move if there’s no urgency at hand.

Eye in the Sky reminds us that the gaze of power is not impervious to the urge of domination. The powers that fight the good fight against the very bad guys, the ones that have declared the war on terror, containing the threat with the explicit aim of eliminating it someday, are very much aware of their own meaninglessness were they bereft of a form of opposition, something (some opposing force) to fight for, which means something (some opposing force) to fight against: Someone to defeat. Intervening is, all in all, playing the game of terror, paying attention to it, lots, and then giving them someone to fight against as they invent through it something to fight for. The fight then turns into a: Who outdoes who, who beats who, who prevails over who. Power as domination demands opposition. Such power, as a matter of fact, directly depends on it. This power counts on your opposing it — and it keeps counting on you. Us. Vs. Against and against. Vs vs vs. 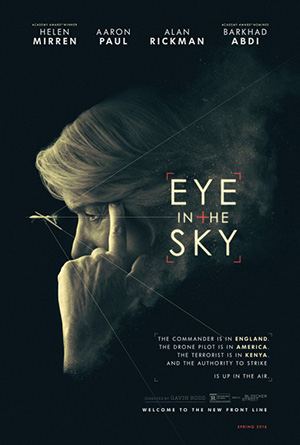