The mental institution is a great location for nearly all movie types, but none more so than the horror or thriller genre. Isolation, deeply disturbed patients and or a sadistic doctor are several cornerstones that can be explored. And using some of these staples, John Carpenter, emerging from a ten year hiatus from movie making, brings to the screen The Ward.

It’s 1966 and it is a great time for Kristen (Amber Heard) to be locked away under the watchful eye of a trained physician like Dr. Stringer (Jared Harris). There apparently remain several unanswered questions about her, the biggest of which is why, half naked, she torched a remote farmhouse and watched it burn to the ground. But there are two other mysteries that need solving as well: Why are only hot girls admitted to the North Bend Psychiatric Hospital (more of a personal question I needed answered) and why is there a creepy ghost working overtime trying to kill them off.

Unfortunately for the viewer, the answer to all of those questions is as interesting as popping a boil on a dog’s ass. It doesn’t take long to figure out why the ghoul, whose make-up looks to be done by a high school drama costume department, is laying siege on the patients. Actually, the entire screenplay — with the sophomoric twists and turns, and woeful dialogue — looks and feels like it was pulled from the locker of a drama student. To its credit, though patently bad, it does take considerably longer to understand why the rooms of the facility are inhabited only by hotties like Emily (Mamie Gummer), Sarah (Danielle Panabaker), Zoey (Laura Leigh) and Iris (Lyndsy Fonseca); it’s the contrived payoff that really slaps you in the face once revealed.

Further pushing The Ward into the sludge, is the heavy handed use of jump scares, “ominous” music (which actually gives away the presence of the ghost, thus negating the majority of jump scares) and the poor performances by all the cast. Amber Heard could be commended had this movie been her first acting gig — she tries, even though she isn’t given much direction other than to overact exasperation and feign interest each time the camera focuses on her. The rest of the cast knows they’re in cheesy horror flick that should not have found itself a financer or distributor (except maybe the SyFy channel) and act accordingly. Perhaps these girls could have been paid a few dollars more to spruce up the picture by offering up a bit of skin . . .

Anyways, it didn’t take the full running of time of 88 minutes to realize The Ward is not the shock and awe movie to announce John Carpenter’s return to the genre he dominated so many years ago (“Halloween,” “The Thing”). Rather it is a simple, unimaginatively dull movie showing that after ten years, maybe Mr. Carpenter needed some extra change to pay the bills and appended his name on the first thing that came across his desk (which, after all these years, probably isn’t much). 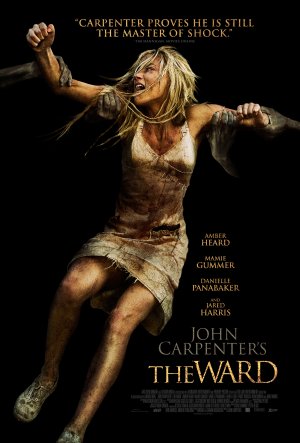