For years now, Tim Burton has seemingly lost the ability to surprise. So his latest picture succeeds on that modest level by actually being somewhat decent. Big Eyes, a strange true story about deceit in the world of art and marriage, is hardly Burton at his best, but it’s certainly Burton at his most enjoyable in years. Trading in the garish CGI and ramshackle storytelling of relatively recent disasters “Alice in Wonderland” and “Dark Shadows” for the quaintness of a grounded domestic drama, Burton at least seems to have regained some heart in his work.

The filmmaker has always seemed more comfortable in fantasy worlds than in real ones, but those desires have led him down some pretty rotten paths of late, chasing the digitalized phantoms of his grand past. And besides, Big Eyes, for all of its true story-ness, is a weird little tale of the real world gone somewhat awry, so perhaps it’s not too far from Burton’s comfort zone after all.

Its closest cousin in the director’s filmography is clearly “Ed Wood,” the richly comical biopic that is easily one of Burton’s greatest achievements. And of course, it’s no coincidence that both movies are written by biopic vets Scott Alexander and Larry Karaszewski. Their involvement here puts the movie in that difficult spot where a comparison begs to be made, especially considering the greatness of the last time this writing duo teamed up with Burton.

Big Eyes feels as much like lesser Alexander/Karaszewski as it does lesser Burton, but thinking more positively, the writers have certainly helped pull Burton back to a more interesting and engaging place than he’s been in lately. The comedy definitely feels more natural than it did in “Dark Shadows” and the characters are actually compelling at times, which is much more than can be said about any of the inhabitants of Burton’s Wonderland.

Perhaps it’s the lack of Johnny Depp, who once did some of his most gloriously zany and hauntingly moving work under Burton’s direction and then followed that up years later with his most insipidly annoying shtick to date. Whatever the reason, it seems that Burton is conscious of how out of control his nonsense has become and has decided to rein himself in with something a little more calm and collected.

Well, calm is a relative word here, because Christoph Waltz (“Django Unchained”), who plays con artist Walter Keane, is about as wired as he’s ever been. To balance him out, there’s a meek, quiet Amy Adams (“American Hustle”) as Margaret Keane, Walter’s new wife and a distinctive painter whose titular style took the art world by storm in the 50s and 60s. The strangeness of the story stems from Walter’s decision in the heat of a moment that could make or break a sale to claim Margaret’s paintings as his own. 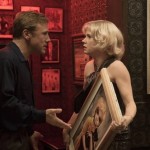 The little fib becomes a gigantic lie as Walter continues to feed the facade while Margaret begins churning out her paintings from behind closed doors, unable to let anyone know the truth that she’s the one with the paintbrush in hand. Margaret even has to keep the truth from her daughter Jane (played in her younger years by Delaney Raye, whose unique look suggests she was destined to star in a Burton movie).

Walter proves to be quite adept at selling himself, so the mysterious what-if scenario of whether or not Margaret’s paintings would have become such pop cultural icons without Walter’s business skills at least lurks in the background. But mainly, the movie concentrates on the couple’s slowly eroding relationship and the complexities of Walter’s fraudulent deceit. And since it’s mainly set in 50’s/60’s San Francisco, the movie provides some sumptuous rainbow imagery of everything from neon-lit streets to picture perfect supermarkets.

Freed of the need to create CGI fantasylands, Burton uses the digital effects more sparingly, more subtly to craft some of his prettiest images in years, bright and evocative. His primary focus is on his stars, though. The casting of Adams and Waltz is far from unexpected (their Margaret and Walter are just new shades of roles that the two actors are often hired to play), but Burton at least achieves his goal of pushing the onscreen partners to opposite ends of a spectrum.

As much as Adams downplays her performance, Waltz overplays his. The result is a tug-of-war that puts the characters at odds even before the cracks in their marriage start to really take hold. This allows Burton to build the conflict between the two in gradual stages. He doesn’t have the deftest touch, but he does a fine job of setting the couple up as a team with a common goal and then splitting them apart to create a clear hero/villain dichotomy.

It’s here that the casting at least makes sense. Rooting for Adams is easy, since she’s charming and smart and strong when she needs to be. Waltz is charming, too, and fun to watch at times, if not a bit exhausting, but he’s dialed up to 11 for the entire movie and so it’s easy to turn on him when the time comes because an overbearing sliminess soon overtakes all that charm.

Everyone else in the cast seems equally cast for predictability (Krysten Ritter as a snarkily supportive friend, Terence Stamp as a scowling art critic), but they work well enough to render the criticism somewhat moot. This is how Big Eyes operates. Not exactly refreshing in its approach, but refreshing nonetheless because it’s Burton calling the shots. Alexander and Karaszewski’s script isn’t on par with their sharpest work, but it still tells the story in a concise and interesting manner.

Throughout his career, Burton has generally told stories with men as the protagonists, ranging from Pee-Wee Herman to Batman to Ichabod Crane. Of his few titles with women in the lead hero role, he’s made one of his very best movies (“Beetlejuice”) and one of his absolute worst (“Alice in Wonderland”). Big Eyes falls somewhere in the middle, but ultimately on the side of good. We’re still a long ways off from the director’s glory days, from his towering creative peaks, but at least Big Eyes shows that he’s still capable of doing something a little different, with less effects and more feeling. 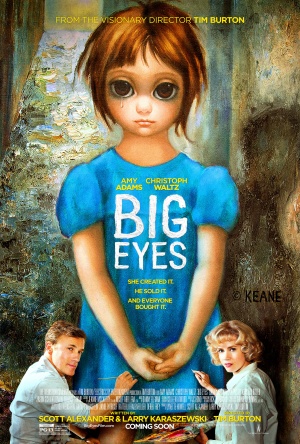