Mike Leigh’s film Mr. Turner centers on the last twenty-five years of the life of the acclaimed 19th century English landscape painter, J.M.W. Turner. Though the film, with the strong assistance of cinematographer Dick Pope, succeeds in capturing the look and feel of the time as well as the essence of Turner’s beautiful landscapes and seascapes, the film’s primary focus on the painter’s flaws as a human rather than his accomplishments or inspiration as an artist feels misguided. A great character actor, Timothy Spall’s recreation of the acclaimed painter tells us all we need to know about his eccentricities but his performance, however brilliant, borders on caricature and does not convey any true sense of Turner’s greatness.

Secure and confident with his artist friends and colleagues, Spall depicts Turner as the original grumpy old man. He walks with a stoop, grunting and groaning more than engaging people in conversation. He treats his long time housekeeper Hannah (Dorothy Atkinson) as a dispensable commodity, displays indifference to his two daughters by an ex-lover Sarah Danby (Ruth Sheen), and shows up one of his rivals, John Constable (James Fleet). His only affectionate relationships are with his father, William (Paul Jesson), a former barber, who helps out as his assistant and with Mrs. Booth (Marion Bailey) a charming, twice-widowed landlady of a seaside house in Margate, where Turner frequently visits.

One of the highlights of the film is the moment when he looks directly at her and says that “You are a woman of profound beauty.” Though Turner is accepted by the Royal Academy, his blurry, hazy forms dissolved in light during the latter stages of his career alienate some of his peers but Turner is indifferent to what others think of him. He is less than amused, however, when his work is held up to ridicule at a stage performance and sales of his paintings fall off. Turner does have a champion, however, in John Ruskin (Joshua McGuire) who discusses Turner’s painting The Slave Ship showing slaves being thrown overboard during a storm, commenting perceptively on the way the light hits the water.

Turner, however, admonishes Ruskin for dismissing a deceased artist for failing to match his ability. The painter’s experience with the new artistic potential of photography also deepens his feeling that his time in the spotlight is nearing an end. Though not discussed in any depth in Mr. Turner, Turner’s famous painting of The Fighting Temeraire showing an old sailing ship being towed into harbor by a small steamboat is as close to an elegy of the passing of time that exists on canvas. Likewise Turner’s visual depiction of the encroachment of the industrial revolution in the form of enduring images of the steamship and the railroad signal a new age in technology.

Leigh’s stated purpose in making Mr. Turner is to “examine the tension between this very mortal, flawed individual, and the epic work, the spiritual way he had of distilling the world.” While I agree that the life experience of an artist is a complex mixture of the mundane and the transcendent, to further advance our understanding, we need to look beyond the “stuff” of life. Focusing on Turner’s abrasive personality, abortive family relationships, and sexual liaisons does little to advance our knowledge of his artistic expression, genius, and “the spiritual way he had of distilling the world.” J.M.W. Turner was a secretive man about his personal life. Perhaps it would have been best if his desire for secrecy had been honored. 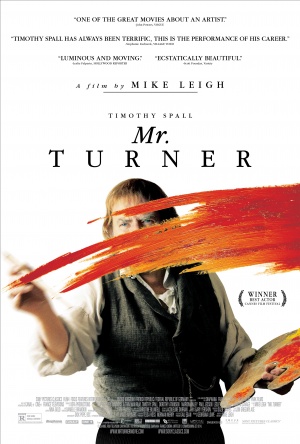