Approximately ten times a year, to the theaters come those animated children movies we, as parents, cringe at. Our children want to go, no matter how bad the movie appears — so long as it has animated animals or dinosaurs or vehicles or rugs. Of those times only one or two of them are worth the computers needed to make them. Last year it was “Cars” and to my dismay “Happy Feet. This year the crop harvesting has begun with the the latest Disney offering Meet The Robinsons.

In Meet The Robinsons, we are presented a 12 year old, orphan boy Lewis (voiced by Daniel Hansen and Jordan Fry), who looks strikingly similar to Ray from “Jerry Maguire.” He’s not your ordinary child. Instead of sports, girls or clean clothes, he is consumed with imagining and building inventions. This doesn’t bode well for building friendships or getting adopted as all of his creations tend to behave in an unexpected manner and usually at the expense of others. Finally, as a last ditch effort to figure out who his birth mother is, Lewis concocts a memory scanner out of some spare parts laying around. What he doesn’t realize is this scanner is the key to the future and time travelers from the time to be want to get their hands on it, namely Bowler Hat Guy (Stephen J. Anderson). From here a fantastical voyage occurs.

So, will Meet The Robinsons be the cream of the crop for year 2007? Doubtful, although, there are many good aspects to it. First and foremost, the future is one impressive place! The Robinsons have built what appears to be a utopian society. Need a building? Auto expand one in the location you need it. Need to get across town? Get sucked up a vacuum tube and be delivered to your destination. Got a longer trip to go on? Get transported there in a soap bubble. All this non-polluting technology — it’s great to see we’re not tied down to foreign oil in the future!

The character development is well done too. Most significant, obviously, is Lewis. Whether you want to or not, you’ll find yourself caring about him. He’s got a heart of gold and just wants to be able to please everyone. It’s because of this desire to be accepted and ultimately adopted that pushes this poor kid to his breaking point. I just wanted to help this kid (even though my helping would have altered the future in a very negative way). I also found Bowler Hat Guy to be rather intriguing. Yeah, he’s a complete idiot, but watching his zany actions and ultimately finding out who he was, was a great balance to the story. Without him, Meet The Robinsons would have been to preachy.

So why won’t Meet The Robinsons ascend? Simple — word of mouth. First, let me mention the dinosaur. It’s been plastered all over the television screen — dancing and prancing around — in an effort to get kids interested. The problem is the T-Rex acts like a real predator in the movie! It is trying like hell to eat people; it ain’t doing a line dance with anyone as most people would expect. One family will see the movie and tell everyone else to stay away. Two and not nearly as important, Pixar isn’t involved. What Pixar touches is gold and it can be said with some level accuracy, that lately, Disney attempts at these kinds of movies tend to show poorly (last one that comes to mind was “The Wild”). There is just some pizzazz missing.

Overall, Meet The Robinsons is a good showing. It has a great uplifting message of “Keep Moving Forward” and for the most part it is well crafted (even if the vacuum tube idea was done in the sixties cartoon “The Jetsons”). And while it is geared toward children (it has a G-rating) I don’t believe easily upset and/or impressionable kids should see it. That is of course unless:

If you want a good movie to sit and watch with your kids, I’d wait for “Ratatouille” which is due in theaters in June. 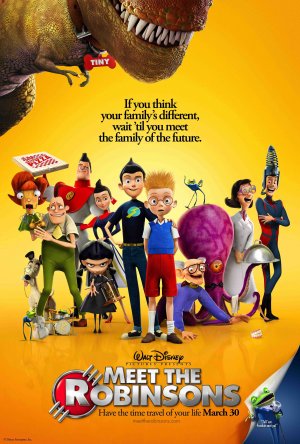