One of the main reasons why words are so fascinating is because they can house inside mutually exclusive meanings. They are the embodiment of freedom, for they can harbor opposite significations while keeping their expressive powers intact. This is the case of the Amharic word difret. On the one hand, this word embodies the very blind-spot that safeguard traditions without any further questions. On the other, it embeds the self-awareness necessary to effect and/or produce any change. In this way, while within the first signification, difret expresses “the act of being raped,” the second signification confronts the first one, as it denotes “the act of daring.” The kind of rape we’re talking about here though is a different kind of rape, a different difret, for although a man is physically abusing a woman (usually a young girl), he is doing so under the protection of a millenary tradition that allows a man to abduct a girl of his liking and rape her if (and only if) he will marry her after.

Hirut, the young and courageous protagonist of Difret, falls prey to this tradition. An intelligent young girl who is about to be promoted to 5th grade in school, she’s abducted on her way out on the very same day she’s being told about her big promotion by a gang of guys on horses — most of them best-men for the best man, the one who has decided to recur to the tradition of telefa in order to secure him some good genes for his offspring. This Ethiopian tradition dictates that any man who declares his intention to marry a young woman (or girl, as is most often the case) and is refused by the father of the unwitting bride is in the right to abduct her and, if done successfully, marry her. Hirut’s father has already lost his eldest child to telefa, so he refuses to let her second daughter marry without receiving some education first. The gallant groom is therefore left with no other option.

One morning, after Hirut (Tizita Hagere) has been raped by her husband-to-be, she takes a chance by taking the gun he has left unattended. She runs, not far, and is cornered by her abductors. Without any other choice left, she shoots the gun and makes herself a very young widow. The abductors are about to slit her throat when the local police take the matter on their hands and imprisons the girl to let her wait for capital punishment. This is where Meaza (Meron Getnet) comes into Hirut’s life. A young and passionate lawyer, Meaza has founded the Ethiopian Women Lawyers Association to defend women who would otherwise be left undefended. Hirut appears as the perfect case to move her agenda forward, as never in the history of Ethiopian law has a woman won a case of self-defense involving a dead man. But, as we learn, there are other motivations for Meaza to take Hirut’s case, as we look at the lawyer seeing her own childhood reflected in Hirut’s eyes, which makes her question what would have become of her hadn’t she had several brothers to protect her.

But it is through Hirut’s eyes that Difret reaches its highest points. The girl makes us travel to the time in which a culture, every culture, is actually built. Cultures were erected upon domination, whether of nature, of our surroundings, of our technologies, of our fellow humans or of our fellow gender. Sex, as one of the greatest manifestations available of love, of the love we can feel for another human being, is one of the first acts to be controlled in a civilized society — it is the interdict of love the one that allows the policy of domination to thrive. Sex, in this manner, becomes synonym with domination. Domination, in this fashion, turns into the exact equivalent of an extended form of masturbation. Within such a context, basic decency is often confused with kindness. And, as Hirut demonstrates over and over again, there’s nothing more suspicious than the kindness of others who are unrelated to you. Only in keen can kindness operate within the borders of a system that has distrust as its main mandate.

In a distrusting system, which is pretty much the kind of system over which all civilizations are or were raised, all processes of courtship start and end as processes of possession. Once a successful courtship comes to an end, rights of exclusiveness and obedience (mutual, in the best of cases) are given and granted, rights both parties involved (plus the third party of the mediating State that validates them) expect and are expected to honor till the end of their time — or of their contract. In this latter case, courtships are usually coordinated with courts, where rights and obligations are signed and assigned. Without a court system, courtship means nothing or very few, for it is not official.

These two courts are very well-explored and juxtaposed by first time director Zeresenay Mehari. He both looks at love as an act of taming and at law-making as the by-product of tamers. One of the strongest points of Difret relies on the way in which the two legal systems coexisting in Ethiopia — the council of elders in the village and the courts in the city — are contrasted and argued against. They are both seen without so much judgement as with a pinch of dismay. The only reliable law for Mehari is the one made and guarded by honest individuals. The two law systems thus interact in this film in the same way in which the opposite meanings do in the semantic field of the word difret.

And although what Difret sets to tackle is in every order courageous, its storytelling is not — and here we are in front of another set of opposites dwelling inside the same entity. But let’s talk first about what it tackles. The film explores the institutionalization of love, and it forces us to look at it with our Westernized eyes and accept that, if anything, we have only displaced our thirst of domination, for our societies are still erected, and our juridical systems are still dependent, on making up acceptable practices to dominate one another (i.e., the stock market). Courtship thus moves into a different court, a different one in which justice often sounds like rape and rape is too frequently a dare.

Difret counts as well with two excellent performances by its two leads, which does contribute to pull the viewer out of their comfort zone granting the viewer is not willing to jump into condescending conclusions and declare the village’s practices barbaric — past this point, most viewers can see we haven’t gone too far from the original problem.

The other problem, nonetheless, comes when we look at Difret as a cinematographic product rather than as a courageous courier, and here there is more than one issue. The main one perhaps is the disjointed storytelling, which titillates up to the point of wandering. Important characters with promising arcs disappear out of the blue (i.e., Hirut’s appointed lawyer) only to come again too late to have them developed, and seemingly relevant relations to our main characters (the most notable being Meaza’s partner and co-founder of the organization) appear out of nowhere and in media res, too late for us to care for them or for their relationship to our characters. It seems that Mehari was suddenly left with too many balls to juggle when in all truth he only wanted to focus on two of them — and then he drops them all . . . only to pick them up again. This is the routine we have to get used to by the beginning of the second act.

Mediocre narrative structure aside, Difret is an important work for Ethiopian art. Nearly twenty years have gone by after the events told in this movie occurred. The fact that an important part of its population today endorsed its productions speaks volumes as to how they are willing to face a tradition that no longer represents them. The fact that the real Hirut couldn’t be consulted because her life is still in danger highlights its urgency and significance all the more.

But as art goes, Difret is too jumbled a storytelling to make it memorable — it stands for neither of its meanings. Fortunately, after it comes to an end, the viewer doesn’t feel raped, not even cheated. Unfortunately, one doesn’t see where it was supposed to be daring. Just like “Selma,” its topic makes it a relevant message we must face and put in perspective even though it comes inside a too conventional, too safe envelope. It’s artfulness is just too tamed to transcend its message or even its messenger. And, you know, when the message supersedes the medium, then the medium becomes, in the words of Marshall McLuhan and in Quentin Fiore’s illustrations, nothing more than the massage, the skilled hands of a vehicle meant to make us feel better about ourselves, for we have understood the message, and therefore we must be better people than those who by it we may have judged and found worth of condemnation. A calculated friction to relax a flabby psyche. 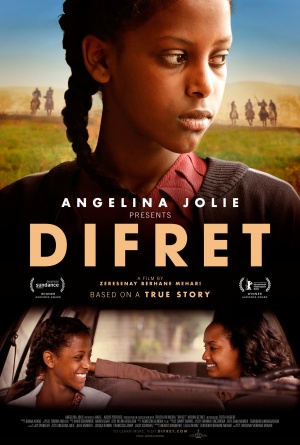