Europe, the years immediately preceding World War 2. Laura (Natalie Portman, “Jackie”) and Kate (Lily-Rose Depp, “Yoga Hosers”) are sisters who have been trekking around the continent performing their psychic act; Laura is the host, and Kate the one who actually communicates with the spirits. They work hard and are good at what they do, but money is always tight.

In Paris they meet André Korben (Emmanuel Salinger, “The Sentiment of the Flesh”), who is on a quest to acquire filmic evidence of the existence of the spiritual realm. He recruits Kate and Laura to help him. The first filmed séance doesn’t go to plan, but it leads to exciting new avenues for the sisters; Laura begins a tentative acting career, and Kate undergoes further research into the science behind her powers. Though they enjoy their separate adventures, the tough times ahead mean they will soon need each other like never before.

One thing that can be said for Planetarium, is that it’s a majestic looking feature. Every scene is beautifully assembled. From the ornate period costumes, to the grand set design, to the lighting and the lustrous foliage in the exterior scenes, a lot of work has been put into making the film a lavish visual experience. The rich, full orchestral score complements this perfectly.

What a shame then, that the content of Planetarium falls so completely flat.

Simply put, the film tries to deal with too many issues at once: Belief, the existence of the spiritual realm, war, decadence, sisterhood, and death. Each time a new theme is layered on, all the energy is drained from the one prior, and so by the time the film reaches its third act, it’s collapsed in on itself from trying to carry a load it was never strong enough to bear.

Any potential emotional potency is also doomed by this overload of ideas. When we meet Laura, we get her only characterization delivered straight from the horses mouth (so to speak); “I know I come across as tough and strong. People don’t like me right away. I’m slow to suffer, to feel things. Yet if you could get inside my head, you’d see that I can be moving, and I need to be loved.”

Two things about this little monologue. It’s positioned so early in the film it’s almost funny; the opening credits haven’t yet rolled and already our leading lady is regaling us with a weirdly poetic self-analysis. And would anyone really say those things about themselves to someone else, apropos of nothing? Director (and co-writer with Robin Campillo) Rebecca Zlotowski seems so uninterested in characterization that she’s desperate to get this bare minimum over and done with as soon as possible. Forget that old chestnut “show don’t tell,” Zlotowski is telling so she can get on with the show.

At least Laura gets those few lines of character. It’s more than anyone else does. Kate never becomes anything more than a waifish creature who can contact the spirit world. Natalie Portman is a good enough actress to go some way toward overcoming her character’s lack of dimension; Lily-Rose Depp is not. The bond between them never seems as deep or as real as it’s meant to be. We can’t care about these people who never seem like people.

“Too much for real life is not enough for cinema,” says a film set beautician to Laura, who is worried about her pancake make up. Planetarium is an opulent, sumptuous production, but the over abundance of themes and unconvincing portrayals means it never makes any emotional impact. Too much, and not enough. That’s Planetarium in a nutshell. 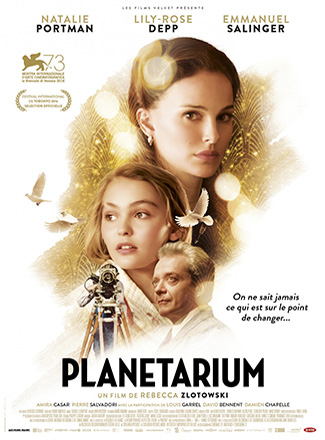