Michael (Jack Parry-Jones, “Our Girl” TV series) and Thor (Christy O’Donnell) are brothers. Well, as they would be the first to tell you, step-brothers. They live with Michael’s mum and Thor’s dad in a little house on Shetland. When Michael doesn’t get into university in Glasgow and his girlfriend does, he starts to get suspicious of the men he sees during their Skype conversations, and decides to make the long trip there to find out what’s going on. Thor, who has some business of his own to deal with, tags along, and they are soon joined by the beautiful, mysterious Caitlin (Tara Lee, “A Date for Mad Mary”).

That’s where the trouble starts. For the first twenty minutes or so, Moon Dogs is a charming, funny little film. Parry-Jones and O’Donnell work well together; the former’s irritable assertiveness contrasting nicely with the latter’s dreamy sweetness. Their fraternal chemistry is fun to watch, and complemented nicely by a colorful supporting cast. The signs all point to an entertaining ride ahead.

But then Caitlin is introduced and everything starts to go downhill. It’s not the fault of Tara Lee, who plays her with admirable verve. It’s the way she’s written. Raven hair, dip-dyed blonde; black leather jacket, nails and combat boots; eyeliner to spare. She’s licentious, but with the voice of an angel. She is quick to give a tortured monologue about how society is engineered to make us feel insecure (aka, she’s “deep”). She has an ill-defined criminal past. She’s the girl dreamed up by gangly teenage boys everywhere.

There’s nothing wrong with that, per se. Moon Dogs is the story of two teenage boys, so it makes sense that the love interest is going to be someone who appeals to them. And as it as their story, not hers, it’s understandable (if disappointing), that we get very little background for her character, and that she gets no development.

But as soon as she is introduced, Caitlin steals the film. She takes up all the air in every scene. The film is no longer about the two brothers and how they relate to each other, but which one of them she’ll end up with. If Caitlin was written in a way that made her three dimensional, then it wouldn’t matter so much, but she isn’t. Her (lack of) character is tedious, and her dominance in the film crowds out many of the good things that Moon Dogs has going for it.

That’s not to say there’s nothing positive about Moon Dogs once Caitlin shows up. Although this is Philip John’s first feature film (he is, however, a prolific TV director), and despite the low budget, the film is tremendously cinematic. Alasdair Walker, also a relative newcomer to cinema, photographs everything from the grey skied beaches to a motorway underpass with a striking lens. Even when the story falters, there’s almost always something nice to look at.

And in the film’s final act, things start picking up again. The character of Thor takes a back seat for most of the drama; his mission to find his mother is barely mentioned. When, in the third act, he does find her, Christy O’Donnell’s ferocious performance seems to come out of nowhere, and is so powerful. Considering how undernourished his storyline had been, the emotional resonance of his acting is particularly impressive.

There’s so much good in this film; the performances, the humor, the cinematography. Moon Dogs is a promising entry in the filmographies of almost everyone involved. It’s just a shame that one badly drawn character can sink a movie with all that potential. 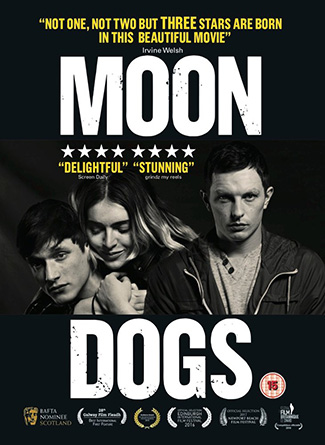