When I visited Spain for the first time many years ago, I immediately felt a sense of foreboding, as if I was being reminded of some long buried event, perhaps in another lifetime. Everything that happened during my stay there did nothing to dispel those feelings either and I have never gone back. Of course, I did not have the amenities available to English actors and comedians Steve Coogan (“Mindhorn”) and Rob Brydon (“The Huntsman: Winter’s War”) in Michael Winterbottom’s (“On the Road”) The Trip to Spain. Based on a TV series, it is the third in a series of “trip” films that follows the 2010 film “The Trip” (to Northern England), and the 2014 “The Trip to Italy.” I wish I could say that the movie was a “trip,” but even though I did not experience any foreboding while watching it, I found it to be an essentially empty and only sporadically funny experience.

Master impressionists as well as stand-up comedians, actors and screenwriters, Coogan and Brydon drive through Spain from Santander to Malaga, avoiding the well known tourist spots to visit small town Spain, places such as Getaria, Axpe near Bilbao, Prejano, Siguenza, Almagro, and Malaga that we never hear about. They eat exquisite looking food, visit historic sites, and, of course, provide a staggering ton of impressions including those of Michael Caine, Mick Jagger, Robert de Niro, Marlon Brando, Roger Moore and many others. It goes without saying that driving a Range Rover for a thousand miles, staying in expensive hotels and eating in posh restaurants is not an experience that is readily available to most people.

Of course, they are good comedians and some of the routines garner a lot of laughs, like the wordplay on the Moors and the family of Roger Moore, a sequence which is funny but unfortunately goes on too long. They also riff on James Bond movies, the Spanish Inquisition, and the character of Don Quixote which leads to their donning costumes and sitting on donkeys for a photo shoot. Playing fictionalized versions of themselves, the rationale for the trip is that Rob is going to write a series of restaurant reviews for “The Observer” and Steve is gathering notes for a book comparing his trip to Spain when he was younger with this new middle-aged one.

While both men are outward successes, the two remain basically insecure and their prickly banter often has a sharp edge to it. Though Steve adapted the Oscar-nominated film “Philomena” for the screen (a fact he is not hesitant to throw in Rob’s face with sickening regularity), his agent has walked out on him and he is dismayed by the fact that the studio is bringing in a new writer to “polish” his script for a new film. Steve is in love with Mischa (Margo Stilley, “The Royals” TV series), who is now married, but she turns down his offer to visit him on his trip. Rob, though he recently appeared in a big-budget Hollywood movie, seems to have become reconciled to being a supporting actor but longs for a starring role. One revealing segment takes place when a young busker performing near a restaurant for gratuities is invited by Steve to have a drink with them.

Everything goes well until the musician starts recommending good places to visit in Spain which Steve finds threatening to his self image of being a man of the world and gets up and walks away from the table. While critics have found the repetitive format of the first two films to have become stale by the third, not having seen the first two, I have no basis for comparison. For me, however, The Trip to Spain quickly became stale and tedious all on its own. The only music in the film is the lovely but overdone 1960s song, “The Windmills of Your Mind.” In the land of Flamenco, however, we do not hear or see any, nor is there any more than a passing interest in the food being served.

The world travelers do not meet or talk to any Spaniards other than waiters, bell boys or old girlfriends. There is talk about dinosaurs and we get some history lessons but there is no mention of Goya, Garcia Lorca, Juan-Ramon Jimenez, Gaudi, Casals, Segovia or the Prado. Spanish poet and mystic San Juan de la Cruz said, “In savoring the finite joy, the very most one can expect is to enfeeble and destroy our taste and leave the pallet wrecked.” The Trip to Spain may showcase the Spain you will find in a National Geographic special, but it is Spain without its heart and its soul. 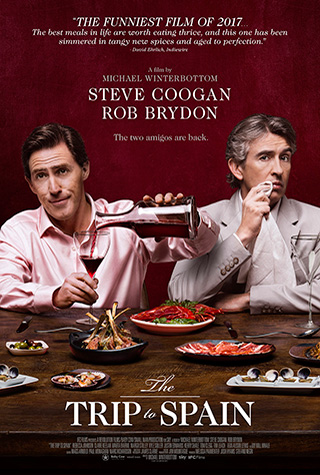