Filmmaker Aldo Iuliano uses a portentous soccer match in his short film Penalty to highlight the hellish efforts of embattled Syrian citizens to flee their country across the Mediterranean. Iuliano’s aim is to put a human face on the refugee and immigrant crisis, where the political issues of the situation give way to a poignant portrait of the life-or-death struggle to survive.

Beautifully photographed in a storm-swept field at the edge of the water and featuring a cast of non-actors hand-plucked from a refugee camp in Calabria, Italy, Penalty feels both cinematically enhanced and fairly authentic. It makes a brief burst of a point, using the soccer match to ironically and metaphorically illuminate the thin line between life and death for these people, and then it leaves us on a somber note.

There’s little room to criticize Iuliano’s efforts. He condenses the conflict into a few short minutes and uses the familiarity of a friendly game among friends to powerfully illustrate the gravity of such a terrifying situation as those in Syria face every day.

Perhaps the short span of 15-minutes is too brief, though. Little time is spent with the relatively large cast and nearly all of it dedicated to them running around on the makeshift soccer field so that it becomes difficult to form a connection with any of the individuals. At the same time, they’re meant to be representative of a whole, so this approach arguably makes some sense.

There’s also space for a potential debate about the effectiveness of Iuliano’s decision to make the purpose of the soccer match a surprise reveal. He clearly intends to shock us, which is a worthwhile approach in certain cases, but I can’t help but wonder if the movie wouldn’t play better as an emotionally engaging experience if we knew what the stakes were from the start and watched the match with that understanding?

In order to make the twist work, Iuliano has to jumble the timeline, jumping back and forth so that we have the various puzzle pieces of the story in time to see them all assembled for the ending. It’s possible that a more straightforward version would be more powerful, but the version that Iuliano presents remains a gripping angle on a terrible situation.

What works best here is Iuliano’s ability to communicate so much of the story in purely visual terms. It’s set at a single location and dialogue is relatively sparse, which puts pressure on the filmmaker to say a lot by telling only a little. The presence of the storm hangs an ominous mood over the proceedings as well, which adds an invaluable element of gloom. While the final impact of Penalty is more numbing than moving, Iuliano has found a memorable way to cinematically interpret an eerily current crisis. 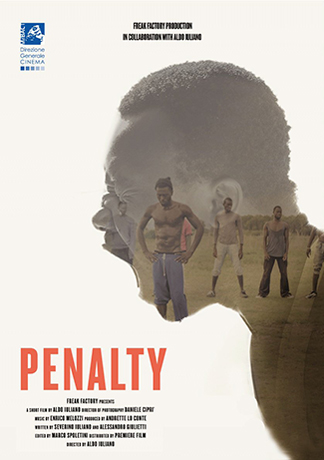