Written and directed by Taylor Sheridan, the Oscar-nominated screenwriter of “Sicario” and “Hell or High Water,” Wind River is a murder mystery about the death of a young Native American women, found frozen in the snow. Part character study, part police procedural, and part political statement, it is a deeply disturbing film that contains graphic violence including a brutal rape scene and a good deal of heartbreak. Though Sheridan has been criticized for not casting a Native American in the leading role, he said that, while he has lived on a reservation, he was still an outsider and did not feel qualified to write his main character as a Native American.

Beautifully photographed by cinematographer Ben Richardson (“Beasts of the Southern Wild”) and set in the snowy hills of the Wind River Indian Reservation in West Central Wyoming, the film begins with a young Native American woman running barefoot through the snow leaving a trail of blood. The scene then shifts to a man lying in the snow on his stomach. Rifle in hand, he picks off wolves that have been attacking sheep in the area. The hunter is Cory Lambert played by Jeremy Renner (“Arrival”) who delivers a strong performance as the tough, stoic, and taciturn man who works as a tracker for the U.S. Fish and Wildlife Service. When Cory discovers the frozen body of a young woman he recognizes as his daughter’s friend Natalie (Kelsey Asbille, “Full of Grace”), it brings back memories of his daughter, also a Native American, who died a few years ago under mysterious circumstances.

Cory pays a visit to his estranged wife Wilma (Julia Jones, “The Twilight Saga: Eclipse”) and his son Casey (Teo Briones, “Pretty Little Liars” TV series) to tell them about the tragedy, but once the film focuses on solving the mystery of Natalie’s death, they are not heard from again and the thread is left hanging. Since Natalie’s death occurred on tribal lands, Ben (Graham Greene, “Out of the Darkness”), chief of the tribal police, becomes involved in the investigation. Like Jeff Bridges’ Sheriff Marcus Hamilton in “Hell or High Water,” Ben has a dry sense of humor but goes about his business in a focused and determined manner. The investigation, however, is run by rookie FBI agent Jane Banner (Elizabeth Olsen, “Godzilla”) who was sent from the Las Vegas office incongruously dressed more for a Las Vegas show than the unforgiving, bitter cold of Central Wyoming.

Reminiscent of Emily Blunt in Denis Villeneuve’s “Sicario” who loses her illusions about the nobility of her work against drug lords, but maintains an inner strength, Banner is beautiful, self-assured and expert, but she is vulnerable and seems somewhat out of place in this environment. Jane pleads with the coroner to report that it is necessary that Natalie’s death be ruled a homicide in order for her to remain on the case, yet he is unable to do so at this point. Nonetheless, she remains and relies on Cory who has lived and worked in the area for years to help her find the perpetrator of what is now clearly a crime. With typical dry wit, Ben tells her when she requests backup, “This isn’t the land of backup, Jane. This is the land of: You’re on your own.”

In another “highlight” remark, Cory tells Jane when she searches for snowmobile tracks in the mountains, “You look for clues, but you need to look for signs.” The two are seeking information on Natalie’s boyfriend Matt (Jon Bernthal, “Baby Driver”), but when they come upon an oil drilling platform, the film erupts in a shootout between the tribal police with handguns, the drilling rig workers with automatic weapons, and the lone FBI agent equipped only with a pistol. The final resolution of the conflict follows a fairly predictable path since there just are not that many suspects working in the area or living on the reservation other than Natalie’s grieving family, a gang of drug addicts, and members of the tribal police.

In confronting what turns out to be Natalie’s rape and murder, Cory must also come to terms with his daughter’s death. In a sequence of moving immediacy, he tells Natalie’s grieving father, Martin (Gil Birmingham, “The Space Between Us”) that it is dangerous to avoid the pain of grieving because that is the only part of a loved one that remains after her death.

Wind River is a strong, suspenseful film that holds our attention throughout. Not much is left to our imagination, however, and its mystery is revealed in a gory flashback that ends in over-the-top violence. While the film has its flaws, to its credit it reminds us that Native American women are much more vulnerable to sexual assault than women of other ethnic backgrounds and that their rapes and murders go largely unreported. In its avoidance of any real focus on the economic, social, or cultural conditions on the reservation, however, or on the unique experiences of its residents, it relinquishes the possibility of having been a truly powerful and memorable experience. 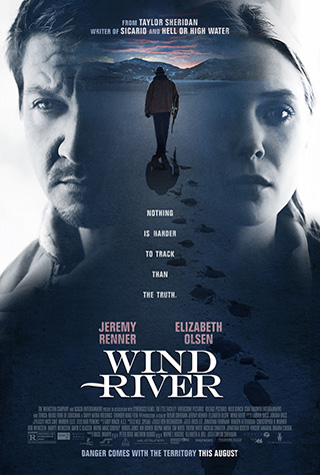