From “Black Christmas” through “Silent Night, Deadly Night” and onto “Krampus,” there is a fine tradition of Christmas-themed horrors running through the decades, and Red Christmas, the feature debut from writer-director Craig Anderson, fits comfortably into the canon. The Christian festival of family and giving is the perfect backdrop for an ultra-violent cautionary tale about the forgotten and the marginalized seeking revenge.

Dee Wallace (“The House of the Devil”), the thinking woman’s Scream Queen, stars as Diane, a mother who brings together her grown-up children and their partners for one last Christmas in the family home before it is sold to finance a sexagenarian tour of Europe. But as Diane looks to the indulgent future, the past is about to catch up with her in the bloodiest fashion.

Cletus (Sam Campbell, “Bin Chickens” TV series) arrives on Christmas Day. Clad in Grim Reaper robes and wrapped in leper bandages, limping and mumbling like John Merrick, Cletus clasps a letter. He’s arrived to find the mother who abandoned him. The family’s pity and compassion only goes so far, though. Diane, protesting her innocence, insists that Cletus be ejected. But Cletus isn’t done yet — he returns that Christmas night to teach Diane a lesson in taking responsibility. Lesson plan: Slaughter everyone.

And there is Diane herself. A mother, a widow and ultimately a leader, Wallace excels in a role that demands broad emotional extremes. The pure joy of her closeness with Jerry is palpable — just as, at the other end of the spectrum, her distress at the wholesale killing is unusually heart-rending. She’s an already-bereaved woman in the midst of further bereavement, and that’s on top of the emerging guilt of her past. What a performance.

Without resorting to contrived conflict, Anderson finds tension and humor in the familial web of relationships. The players in the domestic drama are convincingly intimate and argumentative. All are flawed and none are demonized, making for a compelling dynamic. It’s all we can ask from an 80-minute slasher to make us care enough about the characters that we don’t want all of them to die.

So, Anderson works well with the actors, who work well with a good script. From a film-making craft perspective, however, it’s more of a mixed bag. Visually, Anderson keeps things consistently interesting, even when it’s a bunch of talking heads, smartly blocking to furnish the frame with depth and a sense of confinement. And there are some bold and memorable individual shots: A distraught Cletus on his knees, dwarfed by a forest that seems to be consuming him; or the family on the doorstep, silhouetted against the sunset, as if already cut out of existence.

Later on, however, when things get more hectic, Anderson’s control seems to slip. In the action scenes there are too many close-ups and too much shaky cam, and the editing becomes scrappy. Key moments — including a crucial climactic death — are obfuscated by nonsensical quick-cutting and a lack of clarity within the frame itself. It’s hard to elaborate without spoilers, but let’s just say that a potentially excellent (and deliciously nasty) ending is left largely to the imagination.

It’s a pity because, in its mid-section, Anderson manages to conjure some genuine tension and an array of decent deaths. There’s a great scene involving a wind-up torch, its light always threatening to fade; and the murders themselves successfully nail the balance between repulsive and funny. The reveal of Cletus himself is pretty laughable, but by that point he’s already established himself as a refreshing and unusual movie monster.

Familiar in setup but frequently original in execution, Red Christmas is a superior mini-budget horror movie, recommended for a fun horror movie night, especially with friends. Its swift pace and humorous script make it a breeze. With a little more clarity to its action, and more disciplined editing, it might have sneaked into cult classic territory. Worth a watch, any time of year. 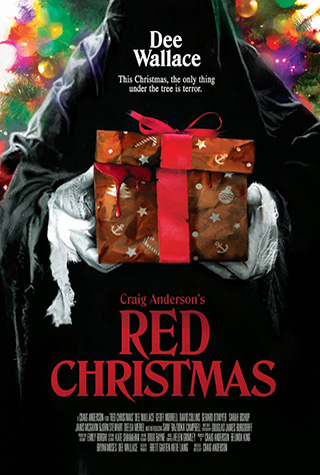