There are four words that everyone should know in their respective language:

That goes for bears (or other wild animals) and in this particular case, Halle Berry (Oscar winner, “Monster’s Ball”). Berry returns to the screen with Kidnap, an action-thriller about a blue-collar mother who does everything she can to get her young son back after he is taken from her. Directed by Luis Prieto (“Pusher”) with a raw visual style, the film clearly aims to attract the attention of mothers with young ones, as well as the action-loving audiences of the “Taken” franchise. So much so of the latter, in fact, Berry even gets to have her own “I will find you and I will kill you” monologue. But there’s no such thing as a rip-off/rehash in Hollywood, after all, imitation is the sincerest form of flattery and the quickest way to make a buck. Or something like that.

Anyways, like Liam Neeson’s actioner and Berry’s similarly themed “The Call”, Kidnap is a possible “real-world” scenario that benefits from highly ridiculous and sometimes extremely convenient action sequences and behaviors. But somehow, much of it works because of the filmmakers’ choice to ground the film realistically and emotionally. At this point in her career, Berry has been trying to live a quieter life as a mother while her much tabloided love life has overshadowed her performances in clunkers like “Movie 43” and “Dark Tide.” However, now may be the end of that phase as this newest effort proves she still has groove left to carry a film, although it’s far too early to tell if she’s entering a renaissance period as Matthew McConaughey has experienced in recent years.

Nevertheless, it is Berry’s drive as Karla Dyson — fueled by love and want of protection for her son Frankie (Sage Correa, “Papa”) — which breathes life into a movie that would most likely be stillborn in lesser hands. Sharing some of screen time with Berry, and also delivering convincing and unnerving performances, are the film’s antagonists, Chris McGinn (“Sight Unseen”) and Lew Temple (“The Lone Ranger”). Both actors bring a dimension of evil practicality to their roles, which in turn will have viewers (especially those with children) feel all the more frightened for the position Berry’s character finds herself in. Coupling a fast paced running time of 94 minutes with these assets, Kidnap sees success as an emotionally charged, high-octane thrill ride (nearly two thirds of the movie involves a car chase, giving the recent “Baby Driver” a run for its money for time spent behind the wheel).

Credit also goes to Prieto for making Knate Lee’s story function believably despite the absurdness of some of the obstacles and successes dealt in the film. Federico Jusid’s tense score aids in the effort too, but as mentioned, the ultimate success of Kidnap can be mostly attributed to Halle Berry elevating the material beyond that of what is basically on paper: A clichéd thriller. When she commits to a role — as she does here — she throws off intensity with the best of them. Hopefully, her efforts with Kidnap mark the start of a reinvigorated Halle Berry. Movies in general are that much better when they take advantage of her considerable (and often underused) talents. 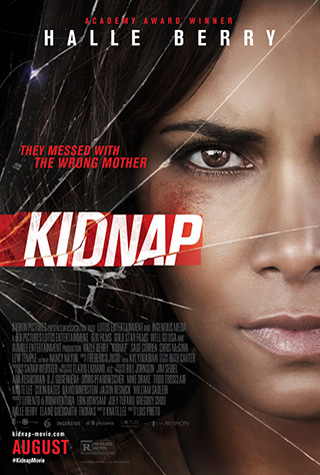