Somehow Hollywood continues to search for different outlets to convey young love at the box office. Sure, the goal is always the same in terms of tapping into the youth market by promoting yet another transparent teen weepie, but this time with The Space Between Us it’s among the stars. Hey, youngsters need catering at the movie theaters as well, right? However, one is not so convinced that the Young Adult (YA) genre is convincingly elevated by a flimsy frontier sci-fi romancer among the Clearasil crowd.

Director Peter Chelsom (“Hector and the Search for Happiness”) and screenwriter Allan Loeb delve into the conventional clichés of a lame star-crossed lovers theme that wreaks of saccharine-coated simplicity wrapped in scientific triteness. The awkward mixture of lightweight science fiction drama, pandering gooey-eyed overtures toward teenage girls still nostalgically embracing their “Twilight” fixation and space-age elements as exploration filler makes for a paper-cutter potency that creates unwanted space between us or any other species watching this cosmic claptrap. I’ll give Chelsom some credit, though — at least his young protagonists are not another incarnation of obligatory hairy, shirtless werewolves or fanged, sparkly vampires.

The adolescent pen pals in The Space Between Us are truly from different worlds, although this does not stop these particular kids from bonding deeply. 16-year old, advanced academic Gardner Elliot (Asa Butterfield, “Ender’s Game”) is having a time of his life corresponding with the edgy Tulsa (Britt Robertson, “The Longest Ride”) in the chat rooms. Whereas Gardner is a whiz in robotics and comes from prestigious stock (his late mother was a pioneering astronaut) his object of affection is a motorcycle-loving wild child that had bounced around in the foster care system. The other glaring difference between the unlikely young couple is that the scientifically gifted Gardner is located on Mars and Tulsa is a gritty gal living on Earth in the state of Colorado. Geez . . . talking about long distant relationships, huh?

Poor Gardner has always entertained the thought of traveling to Earth — the home planet of his deceased explorer mother who died giving birth to him during her mission to colonize Mars. So now there is more of an incentive for Gardner to yearn for visiting Earth now that his curiosity and fascination with Tulsa has heightened. At this point all the young Martian has going for him socially is his guardian/second mother Kendra Wyndham (Carla Gugino, “San Andreas”) and the robotic pal he built to provide companionship. The cruel reality for Gardner not being able to take a trip to Earth has something to do with his sensitive Martian-bred body not being able to withstand the atmospheric gravity settings on our planet (huh . . . is he not still a human?). All Gardner wants to do is come to terms with connecting to the planet Earth and finding some self-discovery about himself and self-fulfillment with his Colorado-based crush in the leather-clad Tulsa.

Of course the film figures out — in convoluted fashion, no doubt — how to place the inquisitive Gardner on Earth’s soil through the far-fetched means of a billionaire, Nathaniel Shepherd (Gary Oldman, “Dawn of the Planet of the Apes”), funding the experimentation and expedition of the Red Planet-raised tyke who dreams of reaching the planet that houses his unknown father and his precious Tulsa. Soon, the inevitability of Gardner meeting up with his dream girl comes true as the teenage twosome take off and find liberation in each other’s company as the authorities are hot on their trail. Look out Romeo and Juliet . . . you have a cheesy carbon copy coupling seeking to steal your familiar thunder.

The Space Between Us produces more sappy substance than a row of Vermont trees. The fish-out-of-water routine that Butterfield’s Gardner undergoes when reaching Earth is mechanically clumsy and predictable. Butterfield does what he can to portray Gardner as an alien just not from another planet but from his own skin, though this notion is philosophically ambitious to pull off for an interstellar teen tearjerker that has all the complexity of a sofa cushion. Robertson’s Tulsa is the typical rebellious chick, but her and Butterfield’s Gardner become tiresome as they engage in manufactured chase scenes, teen-angst lovey-dovey lameness and dragged-out space travel drivel that beleaguers this simplistic science fiction yarn.

Ultimately, the results of The Space Between Us is alarming more than charming. Once the payoff is realized, one will be left wondering when the next asteroid is coming to obliterate the memories (and any possible notion of a sequel) of this toothless, romantic sci-fi saga aimed indiscriminately at teenaged targets. 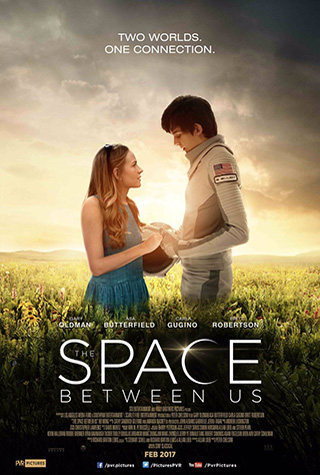