From its opening shot of a house both sleek and warm to its transcendent finale, Arrival arrests attention with a grasp that is firm yet ephemeral. It is a sublime and profound experience, touching its audience on an emotional, intellectual and spiritual level, a film that declares both its originality and its ancestry.

And what ancestry! One of the great pleasures of science fiction is the interplay of repetition and variation, as science fiction cinema (as well as literature and television) reworks and reformulates elements of earlier films. Viewers can identify these elements and enjoy the new film’s interpretation, thus perpetuating a dialogue between filmmakers, films and audiences, each group responding to each other and exchanging with the other parties.

Dialogue, communication and exchange are indeed central to Arrival, Denis Villeneuve’s science fiction drama about first contact between humans and extra-terrestrials. Through careful focus on the experiences of linguist Doctor Louise Banks (Amy Adams) and theoretical physicist Doctor Ian Donnelly (Jeremy Renner), with anxious oversight from Colonel Weber (Forest Whitaker, “Southpaw”), Arrival creates a tangible and plausible vision of the pitfalls and possibilities of a truly alien encounter. While the giant looming spacecraft might echo “Independence Day,” Arrival more closely recalls “Contact,” “Close Encounters of the Third Kind,” “Solaris” and “Monsters.” Crucially, however, Arrival also stamps out its own territory perfectly. After the grim crime thrillers “Prisoners” and “Sicario,” Villeneuve exceeds his previous achievements to prove himself one of the most exciting directors working today, as comfortable with wide scale epic scenes as he is with intimate moments of human memory and interaction. From the early establishment of tragic events (that recall Pixar’s “Up”) to immense moments of global importance, Arrival never puts a foot wrong in its portrayal of a close encounter of the profound kind.

The film’s success is testament to the balance of its various elements. Eric Heisserer’s script is a smart and subtle beast, delicately interweaving character, plot and theme in such a way that no one aspect overshadows the others. Editor Joe Walker cuts with precision between different time frames that inform each other carefully. Production designer Patrice Vermette crafts evocative locations both earthly and unearthly, the interior of the alien vessel an exercise in the uncanny. Jóhann Jóhannsson’s score shifts from quiet and subtle to boomingly bombastic when the scene calls for it. If there is anything missing from the film, it is the extraordinary cinematography that Roger Deakins brought to “Prisoners” and “Sicario,” but Bradford Young’s cinematography conveys a sense of “dirty sci-fi.” Grit, grime and fog obscure the light which gives the film earthiness and texture, allowing the viewer to feel both grounded and alienated, much like the characters.

As the major characters, the central actors give a convincing and distinct range of responses to an extraordinary situation. Whitaker delivers a performance far beyond a military stereotype, concerned with alien intentions but without bullishness or overt aggression. Renner demonstrates range beyond his tough guy roles in the Marvel Cinematic Universe, “The Town” and “The Hurt Locker,” his skepticism and purely mathematical understanding softening as he comes to understand the linguistic approach. As the film’s center and rarely off screen, Adams is never less than mesmerizing and after “Junebug,” “Doubt,” “The Fighter,” “The Master” and “American Hustle,” she may well be on her way to a sixth nomination, and perhaps even a win. Whether Banks is countering Weber’s military expectations with linguistic realities, grappling with her own trauma or conveying a palatable sense of wonder and reverence, her arc is a beautiful and soulful journey towards understanding.

Indeed, understanding is central to the film. Banks must learn to understand the alien language and, pleasingly, attention is given to the painstaking team work of research, as both Banks and Donnelly have large teams to work on their findings. While there are generic moments of revelation, they feel earned because the film creates a sense of long hours worked, falling asleep at the desk and sharing the load, rather than everything being the work of one exceptional individual. Villeneuve takes his time to build up dramatic tension, often using long takes reminiscent of those he used in “Sicario.” Near the beginning, Banks leaves her office and crosses a parking lot, and the shot continues long enough for the viewer to see two cars moving towards a collision which does take place, a moment that foreshadows later events of greater ominousness. Later, when Banks is first brought to the alien landing site, a long aerial shot pans around the enormous vessel as well as the army camp below and the surrounding wilderness. It is a breathtaking moment that expresses the wonder and grandeur of this encounter, filtered through the individual experience of Banks which ensures the audience’s understanding.

Yet Banks’ experience is not the only one that matters, as the whole world is (understandably) involved in the alien arrival. Information is shared among different countries, although tensions rapidly rise and China takes on an intriguing role through the character of General Shang (Tzi Ma, “The Campaign”). The snippets of information about Shang’s approach convey the extremely murky territory that Banks and the viewer are in, a constantly evolving knowledge that could so easily lead to severe misunderstandings. Yet throughout this journey, optimism and hope never disappear, even when events that would thwart a peaceful understanding override the work of Banks and Donnelly. It is this non-partisan but widely applicable philosophy of sympathetic engagement that elevates Arrival, making it not only a superbly crafted piece of cinema, but a timely intervention in geopolitical discourse that calls for communication, understanding and peaceful coexistence. 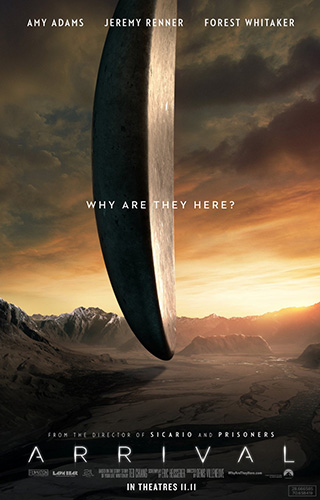