The devastating, sharp The Anatomy of Monsters is the kind of movie that lures one into thinking it’s yet another exploitative woman-in-peril movie only to pivot into a seedy, multilayered labyrinth. Aside from an ineffectual first ten minutes, the movie is a solid — if somewhat claustrophobic — thriller.

The film begins with Andrew (Jesse Lee Keeter, “Brides to Be”), a somber-looking twentysomething, getting ready to go out for the evening. He eyes the clock with some anxiety, leading the viewer to wonder if Andrew has some time-sensitive plan in mind. He winds up at a dive bar and drinks, alone, for hours. He notices a woman, watching him from a darkened corner. She approaches him, they make awkward conversation, and soon they’re departing for a shoddy motel.

The woman, Sarah (Tabitha Bastien, “Imagination Thief”), submissively sits on the bed, a pair of metal handcuffs conspicuously peering out from her handbag. Andrew is interested. Andrew wants Sarah to put the cuffs on, behind her back. Kinky, these two! Sarah closes her eyes and attempts to set a soothing atmosphere; when she opens them, Andrew is hovering over her with a really big knife.

Oh, so that’s the kind of scene Andrew’s into, huh? This could still just be a kinky evening for all involved, but Andrew quickly makes it clear that sex is more of an afterthought for him. He’s a psychopath, he tells Sarah, and he’s going to make this a particularly delightful kill.

But just as Andrew is not the clumsy, anxious young man we thought he was, Sarah is also no shrinking violet. She holds Andrew off with words of support and understanding, biding her time until she can launch her own counterattack. In the meantime, she regales Andrew with stories of her own past, stories that ultimately prove that Sarah is not the easy prey she’d been taken for.

It’s not easy to root for either lead character in The Anatomy of Monsters; in fact, one could make a case for rooting against either (leaving aside the implied threat of rape). Okay, so that’s not truly an issue on its own, because certainly one doesn’t have to like the characters in order to find them appealing. And, to be fair, these two are not good guys. The thing is, though, at least one revels — rather owns — the badness, the lack of moral fiber, whereas the other one is cowed by it.

The ending, however, lacks punch, to be honest. It’s a little too tidy for my tastes and, given the slowness with which Andrew grasps his desperate situation, a mite too predictable, too. We have no reason to believe that he’s the clever kind of psychopath, although it does seem like he’s done this sort of thing before. But if he’s so smart, how come he consistently falls for Sarah’s psychological traps? She runs circles around him, and such a show is made of her manipulative prowess that the ending is forecast too soon.

But a word about the acting. For those ten minutes or so at the beginning of the movie, neither Bastien nor Keeter stand out; perhaps in part because the writing is dry and straightforward. But in the motel-room scenes and particularly in the flashbacks, Bastien’s performance is relevatory. She seems poised to be a true breakout star, and not just in horror films. She’s wicked good at playing what turns out to be a pretty complex character. She’s helped by Keeter, who (it must be said) has the difficult role of playing a guy who might not be as strong or smart as he thought he was and who has trouble figuring out his immediate future.

Strong performances by both leads and a terrific, tight script (by director Byron C. Miller and Paul Morgan) produce a winner in The Anatomy of Monsters, a provocative, slippery, and jarring thriller.

'Movie Review: The Anatomy of Monsters (2014)' has no comments 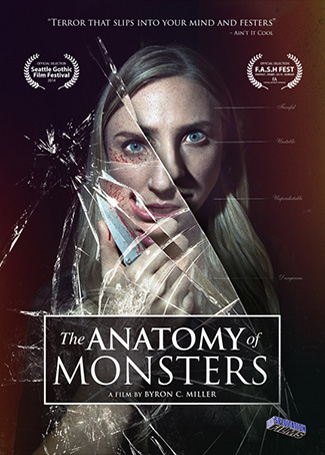