Two bad decisions irrevocably alter the lives of two families when a pair of police officers pull over a suspicious vehicle on a forest road in Felix Ahrens’ taut, tense, terrific short Where the Woods End. What first seems simple shatters into several jagged pieces of moral complexity, all because the driver of the pulled-over car dashes off into the woods to avoid arrest and officer Elke (Henrike von Kuick, “Backpack”) chases after him.

This leads to a frightening, suspenseful sequence as Elke pursues the man and the camera swirls around her in an effective attempt to depict the disorientation that she is currently experiencing. At any point, she could be attacked and that’s meant to be the assumption in a sequence like this because director Ahrens and screenwriter Lucas Flasch have succinctly defined the two characters by their roles: Cop and suspect. We know nothing more, so we assume the worst is possible, just as Elke does.

She survives the event in the woods, but her actions lead to a temporary suspension from the force and personal guilt over what happened leads her to seek answers. Her partner Armin (Tom Keune, “High Society”), who was there when the car was pulled over, assures her everything will be fine, but Elke can’t shake the feeling that she was more justified in her actions than the official report suggests.

Is Elke’s guilty conscience making her look for information that simply doesn’t exist or are her cop instincts better than anyone appears to be giving her credit for? The answer lies at the end of a frightening, though hopeful path that we follow alongside Elke, wishing desperately that some sort of reveal will clear the moral murkiness.

With a 30-minute running time to fill, Ahrens and Flasch provide just enough information about everyone involved to form a careful character portrait of the determined Elke and to dramatically establish the breadth of what’s at stake here. They smartly reserve just enough time to build up a stunning finale that brings everything full circle with some very clever plotting and invigorating directing.

The whole cast is excellent, especially considering this is a relentlessly dreary journey with no levity whatsoever, forcing everyone in the ensemble to play each moment with the utmost seriousness. It’s the script and Ahrens’ ability to bring its eerie ethical conundrums to believably stifling life that make Where the Woods End such a powerful dramatic thriller, though. After all, everyone can relate to making a bad decision. We just have to hope that the price to pay for it isn’t too high. 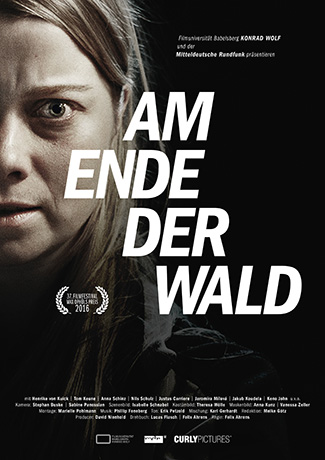