To Leonard Cohen, Eliezer who went just before the big wave rose.

A bulldozer wanders the streets, threatening buildings in ruins through a little Polish village that little knows about its decay. It circulates through the narrow streets silently, streets that remain unwitting to its presence. A mobile bridge appears, a ferry. A lone passenger travels on it along with his vehicle — no, it’s not the bulldozer. A possessed woman in shallow water crosses his path and they lock gazes for interminable seconds. Then his vehicle, an SUV, runs through what seems to be a mine.

The opening scene of Marcin Wrona’s Demon couldn’t be more intriguing. It has the flair of a horror flick with just a pinch of realist drama. And at points it’s both. Yet it’s difficult to imagine the comedy that dwells in its innards.

The lone passenger is Peter (Itay Tiran, “Lebanon”), a Londoner in the process of officially becoming Piotr, as he is there to marry his Polish fiancée, Zaneta (Agnieszka Zulewska, “Chemo”), and enter officially into the family feud (literally we learn later), welcomed by his BFF and brother-in-law, “Jasny” (Tomasz Schuchardt, “Warsaw ’44”), who fondly calls him “Pyton.” The wedding, however, soon runs amok as Pyton starts to exhibit an increasingly strange behavior that threatens the reception following a ceremony where torrential rice was exchanged with pouring rain, with castigating drops falling over the newly-wed couple. Bad omen.

Yet the threat does not fall from the sky; rather, it comes from the underground. As Pyton is well-received by his well-to-do father-in-law (Andrzej Grabowski, “The High Frontier”) in what looks like an area the family will soon develop with the young son-in-law very much seconding the helm, he finds himself visiting the state that Zaneta is soon inheriting from her grandfather, and decides to spend the eve of his wedding there. There he uncovers, as he plays with the bulldozer, making a second appearance, what seems to be the remains of a person buried in the ground — very old remains, but unambiguously human nonetheless. His instinct, as an anxious groom at the gates of his wedding day, is to bury them back, an action that will pull him inside that hole and will gradually hold sway over his body whole.

The family to which Peter is about to join has an extreme case of skeletons in the closet; they are literally in their backyard. The cherry on top his wedding day is that the reception will take place at that very backyard, a plot that hours earlier swallowed him as the overnight storm made it into a swamp, the quicksand constituting the nightmare of which he will not wake up. So comes his wedding, as the spirit of a Jewish woman, likely a bride, takes the occasion to possess the groom and gloom the party for all there gathered.

Demon is one of those rare works that walks registers at pleasure. By placing the bulk of his film during the wedding reception, Wrona is able to freely walk from comedy to horror to sober, somber costumbrism. He acutely enters the intricacies of Polish and Jewish folklore in what may be one of the most ritualized ceremonies of both traditions. Of course, he takes much of the Jewish figure of the dybbuk, that devious demon appropriating bodies for romantic reasons. But the lovesick creature popularized in Jewish folklore by S. Ansky’s play (later refined in Hebrew by poet Hayim Nahman Bialik) is adapted and transformed by Wrona as he paintbrushes this myth with as much folklore and art as he has at hand. We can see him bringing elements all from Polish folklore, film and theater, from Piotr’s possession framed under Piotr Rowicki’s 2008 play “Adherence” to Andrzej Wajda’s (yet another casualty of 2016) emblematic 1973 “Wesele,” itself adapted from Stanislaw Wyspianski’s 1901 homonymous play. As well, Wrona brings to the conversation the work of much more contemporary peers, from Wladyslaw Pasikowski (notably his “Aftermath”) to, especially, Wojciech Smarzowski, more specifically his 2004 “Wesele” — yet another Wedding. It would be fair to say, however, that Wrona’s film sits in-between Wajda and Smarzowski’s films, introducing horror as a litmus paper through which his demons stand out for themselves . . . and very tragically so.

The mark of this demon, this murdered bride, hidden, buried, denied, forever young Hana (Maria Debska, “These Daughters of Mine”), is indelible. Piotr’s dirty hands, with a dirt that won’t wash off, taking over his nails and joints, are but a reminder of what his wife’s and in-laws-to-be’s ancestry bear and, with the land, bequeathed.

It should not be understated the role that the sudden plays in Demon, in spite of the ancestry behind the crime that slowly unfolds (at points turning the piece into a thriller). The sudden tempest that breaks after the ceremony at the church is followed by Piotr’s sudden bleeding nose, and so, a sequence of sudden events (some smaller, some larger) will ensue.

When Pyton is moved to confess what’s happening to him, as he’s making for a very disturbing groom (initially taken as someone who can’t hold his drink), Wrona’s second act unfolds and the metaphor starts to grow into a familiar motif in Polish art (and Polish nationalism): The parasitic relationship between repression and denial. Peter doesn’t want to spoil Zaneta’s day, whereas both his father and brother in-law (this latter still striving for parental approval) don’t want their guests to know. One fears for his beloved’s well-being while the others dread the ruined reputation that will surely come from local gossip. The secret of a possible murder committed by the father’s father, the grandfather, comes as a surprise to both hosts, but it is the ghost’s intention to crash this wedding (with the added grievance that she’s a Jew) that really leaves them aghast.

The demonic central metaphor lying at the heart of this Demon is cleverly hinted at by Wrona at the end of the first act. It comes in the form of a horrible, awkward, interminable toast facilitated by a very old (very Jew) teacher (Wlodzimierz Press, “Kings for a Day”), who brings Aristotle to the mix of pointless parables that end up exasperating the impatient crowd. Yet he pronounces there what would hold the key for the whole conundrum: “Keep that memory in your minds.” And it is memory that no one keeps, that’s easily erased, already meant to be falsified (in gossip, in hyperbole, in romanticized stretches and indulgent revamps) before it can even be remembered. Then those memories that aren’t wanted, that aren’t welcomed, are meant to be buried, denied, hidden in a place inside which those actions never took place. The way the crowd interrupts this toast is quite symptomatic of the response the crisis will get later: He’s interrupted by music, dancing, fun, entertainment and alcohol anesthetizing any flashback, lubricating the motions through which they all get to cope with conflict.

The house, the land, was never really built; it was just there, just as a state is. Someone always comes and claims ownership, a title over it, and thus the entitlement to exploit it, to make it productive — for, it should be noted, before claiming it, that land was idle, sitting there and doing nothing. Ain’t this the way nations are erected — patriotisms built? Some skeletons must be buried in the interim, for some fights will be fought in order to protect this place. Some ghosts must be produced in order to make a land productive. That’s history’s main industry. But then, when two spirits get to dwell the same body, the same land, in the same way in which two minds are dwelling Peter, Piotr, Pyton’s body, one needs to prevail over the other — and one must perish, be exorcised, chased, and vanished. The most important task for those who claimed the land is, in this case, to keep appearances for guests and neighbors, to re-dig the graves the waters flooded, to cover it up with mud and dirt, to lock the nuisance up in the cellar, underground, out of their guest’s sight. Not to let anyone notice there may be the slightest trace of shame in what was done.

The Demon then is, still, the Polish shame that lingers long after the Holocaust: The complicity, when not active agency, in exterminating undesirable neighbors and in claiming unoccupied lands. And the question Wrona gets to ask, an artist afflicted by demons of his own, likely an abusive father, reportedly a street exorcist and a house devil, is: How to move on from such shame in the 21st century, in a civilized society? It can (it will) be declared a healthcare problem, most likely a mental issue, but never a systemic one (right NRA? right right?), a mental issue that turns shame into fear and then fear into anger, wherein fear is redirected to others — or fatally turned against oneself. Wrona leaves.

The fatal fate of this extraordinarily gifted director, with three excellent films to his credit (maybe even masterpieces in the waiting — but there, only time will tell), leaves this question hanging, as does the final act of his Demon. In the meantime, we have only the father’s advice to his guests, pronounced in yet another toast (to finish the second act): “Go to sleep, for tomorrow we’ll see clearer. We must forget what we didn’t see. It was all the product of collective hallucination. I am dreaming you — you are dreaming me. A collective dream.” A dream of which, it seems, there’s no waking up. For we’ve been up all along. “There was never a wedding. There was never a groom.” There was never a crime. There was never a house. There was never a country, a nation, a world. Tomorrow’s given up. 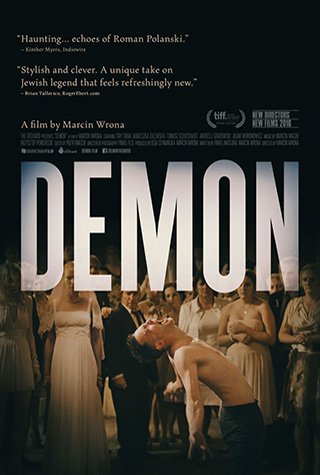