Isaac Ezban’s The Similars (Los Parecidos) is an inventive, daring psychological thriller about eight people stranded in a remote bus depot during a never-ending thunderstorm. It’s relatively short (89 minutes) and exquisitely sweet with intensity and mystery that grow with each passing moment.

It’s dark, it’s rainy, and poor Ulises (Gustavo Sánchez Parra, “Get the Gringo”) rushes into the bus station, on the outskirts of Mexico City, in dire need of transportation. His wife is about to give birth, and the poor sap is stuck out of town. But station manager Martin (Fernando Becerril, “The Thin Yellow Line”) informs Ulises that, thanks to the massive storm, all buses have been delayed. There’s been no word as to when regular service will resume.

Soon, Ulises is not alone in waiting for the (existential?) bus. There’s the odd-seeming indigenous old lady who squats in a corner, mumbling in a language no one else can understand. There’s the very-pregnant Irene (Cassandra Ciangherotti, “Even the Rain”), who has left her lover in a domestic dispute. There’s the student-activist Álvaro (Humberto Busto, “The Incident”), who assumes government conspiracies abound. And there’s also mother Gertrudis (Carmen Beato, “We Are What We Are”) and her invalid son Ignacio (Santiago Torres). Each has his or her own reason for getting into the city.

As the rain continues to pour, the disparate denizens become desperate. They insist that Martin contact other stations to see when the delay will be resolved. They attempt to use the station’s pay phone, but the connections are uniformly terrible, probably owing to the atmospheric conditions. So they wait. And wait.

If you’re thinking now that The Similars is just another claustrophobic horror tale in which the characters will slowly lose their minds, let me stop you right there. The story does have to do with people going crazy and turning on each other, but it’s not simple mind games that toss their brains asunder. The film’s title is a clue. These people start out completely different, but before too long they are all physically similar. What’s causing their transformation, which involves seizures and a lot of facial hair?

The creativity doesn’t stop with the plot, either. The film was shot (according to IMDb) with the new Red Camera sensor, with several filters applied by cinematographer Isi Sarfati, in order to make the movie have a late-1960s feel to it (it’s set on October 2, 1968). Not only does the film stock seem like a relic from that time period, the filters do quite a bit to increase the unease, despair, and dread that the viewer feels. I mean, sure, the characters don’t know what’s going on, and you sure as heck don’t know, either — things happen in this movie that defy explanation. It’s as if you’re being mind melded with the ghost of Rod Serling, and indeed there’s a very strong “Twilight Zone” vibe surrounding the movie. An aura of what-the-heck-is-happening, if you will.

This expertly paced film should receive more recognition than it has gotten, from the eerie atmosphere and gritty setting to the strong performances to the crisp editing. The Similars is scary and puzzling, two attributes I really love to see in my horror movies. And yes indeed, this is a horror movie, not just a thriller — think Stephen King teaming up with the aforementioned Serling to knock your socks off. It’s that good. 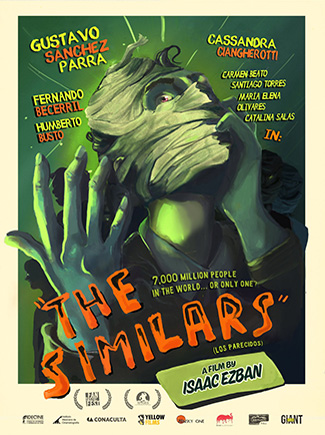