Frank is a man of many walls. He’s been building them for as long as he can remember, but it was only during his early teens that he actually got his first one made by his dad for a costume party that never was. Frank wears a big papier-mâché head over his mask — a face nobody has really seen, with the exception of those who knew him as a child growing in a small town in Kansas whose name he had barely mentioned after he left it. Frank is a man of many walls, but by no means is he a man of few windows.

Jon, on the other hand, is a young man made of screens. He’s been trying to find fine concrete blocks to fortify himself, but he has remained as crystal clear as any average small-town-suburban trendy tad tends to do. You can see right through him, and find there’s not a lot to find. Even though he diligently listens to the voice inside his head dictating songs for him to translate into music, he hearkens nothing — nothing worthwhile at least. And when he does, he soon realizes he’s been regurgitating the tunes of other maestros, of one of his many influences.

At a beach there’s a man trying to drown himself, unsuccessfully. This is the same beach where we first met Jon trying to make music, (painfully) unsuccessfully. At this beach, wherein the unsuccessful suicide fails to drown, Jon — a witness as much as a snoop — meets (let’s call it so) Don, the manager (let’s call it also so) of the “Soronprfbs,” an avant-garde band who has just lost its keyboardist in the water, finally restrained by a couple of paramedics. Jon tells Don he plays keyboards. Don approaches a Van (the band’s) where an invisible figure, doubtless the leader, commissions his manager to probe Jon’s abilities — abilities about which Jon feels fairly confident as he can play the three chords required. Don tells Jon he’s in. In comes Jon at a gig (so-so) played to an audience shorter than the band. It ends abruptly, with the theremin player fumingly abandoning the stage and with the frontman collapsed with a microphone inside his giant head. Clara (the theremin girl) comes back for Frank to take him out of stage. And that’s the end of the gig and of Jon’s collaboration with the band — or so he thinks.

A couple of days later, Don contacts Jon (who goes from “cherishable” to “perishable” and back again) and is asked (more or less) to participate in another gig, which is more the recording of their first record, which is more of a musical retreat that prolongs for nearly a year. The band establishes at a shack in the middle of the forest in Vetno, Ireland, and starts a creative spurt meant to propel the masterpiece Frank envisions as their first album. Don produces. Jon joins. Done.

This is the storyline of Frank, one of the best comedies of 2014. At its core, this film finds a multilayered crossroad, the point at which audience and creator meet. We meet, at the beginning, with two extremes: The young, naive fan and aspirant artist and the older, extravagant but experienced maven who’s almost a creative genius. These two extremes, at the outset, meet with all the expected clichés, but, as the film progresses, we start to see these clichés reverted, revolved and refigured right in front of our skeptical eyes — and we laugh. A lot.

Jon appears as the worst kind of fan, which is, concurrently, the worst kind of audience. The fan from hell that Jon incarnates is the admiring and aspiring peer, the genius in its larval stage, the self-deluded, self-persuaded whiz who has nothing to say — and less talent to say it. This is the kind of fan who preys upon those who pour too much natural ability and too little self-awareness. No one can tell where Frank’s genius comes from; only the results are at hand. As it turns out, there’s but a handful of people who believe in him — but they do it to the last consequences: No audience, no success, no money and no security of any kind.

So, that’s it with clichés. Frank finds its greatness as a comedy where it transcends these common places, and not where it plays with them. We learn that Frank has been secretly craving for success, for likeability, for a loving following. So, at this point, we start to think that, although it’s clear there’s no talent in Jon, maybe his ambition and connoisseurship of likable tastes (as well as his social media savvy) might actually help Frank achieve this yearning. We may have even started to toy with the idea that Frank’s band members (his overtly passive drummer Nana and his explicitly foreign French guitarist Baraque) as well as his closest collaborator, Clara (a mantis-like misanthropist), might have been actually acting against Frank’s inevitable breakthrough.

All these we ideas we can toy with due to Lenny Abrahamson’s remarkable work and, more precisely, Jon Ronson and Peter Straughan’s screenplay. As a matter of fact, Ronson was a loose template for Jon Burroughs, i.e., movie-Jon. Ronson used his own experience as a casual keyboardist in Frank Sidebottom’s band — the “real” Frank that made for most of movie-Frank’s features, most visibly his head. And looking at Frank’s world through Jon’s eyes proves a sound decision, for our character-identification shifts and morphs as much as the tropes and common places do throughout the film.

As the film unfolds, we learn that along (and not behind, as Jon would’ve had it) Frank’s genius there’s a lifetime battle with mental illness — the diagnosis of which we don’t know nor do we need to know. Suddenly, all his eccentricities start to show as protections, barriers through which he kept himself productive and, more importantly, sane. Because that’s Frank’s greatest achievement (among its many). By having a “normal” guy desperately wanting to join the club of the mentally marginal, another wanna-be mental misfit, by having normality sifting through “abnormality,” we see that beyond the realms of psychiatric asylums, beyond medications and therapies, there’s a place wherein mental illness can find a haven and where the sufferer may keep their sanity. This is the environment that the “Soronprfbs” has created for Frank, and more particularly Clara, his loving companion — a mantis of mediocres and a hive for frail geniuses . . . however explosive.

If Frank, however, is so effective at the de-exotification (detoxification) of mental illness, it is largely due to its cast. On one side, we have Domhnall Gleeson (“Ex Machina”) as Jon, exemplarily pulling the many strings of identification; he’s as likable as he is repulsive. Then, on the other, we have Michael Fassbender (“12 Years a Slave”), bereft of the actor’s (any actor) most important tool: the face — and he excels at it. His body, his voice and, more essentially, his hands become the vehicle through which we get to go pass the head after the first five minutes of meeting him. The head is only an issue when someone (i.e., Jon) makes it an issue. In the middle, we have Maggie Gyllenhaal’s Clara, perhaps her best role so far (and to think she almost turned in down), providing her character with depth and a restrained love that she channels through the epileptic sounds she gets out of her theremin and she mimics as she plays it. Then we have the other members. Francoise Civil as a kind if stoic Baraque, Carla Azar (a hell of a musician in her own right, better known as the drummer of Autolux) as the silent but sharp Nana, and Scoot McNairy as Frank’s troubled better half, Don. This cast works as good (and plays as good) as if they were, indeed, a band, with all their quirks and inner interactions.

Abrahamson has already (deservingly) earned quite a good reputation in the circuit of independent film, and he has proven to have quite a developed eye to penetrate opaque characters and get the best out of them. He has developed as well a very dynamic work with the camera in the editing room, particularly when working in interiors (and about two thirds of Frank take place therein), which makes for a very clear-cut, congenial cornucopia of points of view and reactions with a flawless comical timing.

If one gets curious about Frank Sidebottom’s (Chris Sievey’s performing persona) fate, we learn that he never got the recognition that he quite possibly merited; he died penniless and (almost) forgotten. Yet he got this movie — along with an upcoming documentary, likely for a cult-following audience. And though Sievey didn’t have any (diagnosed) mental illness, there’s the unshakable feeling that behind movie-Frank’s struggles are the ghosts of that other musical mad genius, Daniel Johnston, making their way through.

It may be that Frank’s beautiful ending could lead us to wishful thinking. It may be that when we see how his walls become inclusive, how he goes from “walls” to “all” so as to rejoin his bandmates, we may feel a little more optimistic about his fate — with Clara, with music, even with success. As we witness walls slowly ceding, as we see Jon watching, silently and at a distance, we listen to the band’s reunion with words, sounds and free association. Jon leaves. Frank stays. Making music. Making music for us all. A hit for sure. 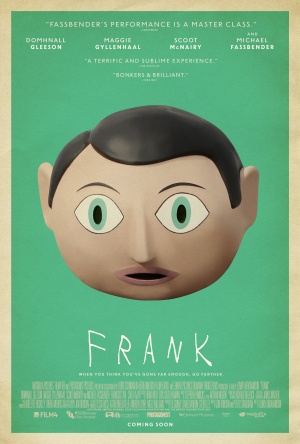