The secret sexual lives of several suburban couples living in Sydney, Australia highlight this interesting, though not very compelling script by first-time director Josh Lawson (who appeared in “Anchorman 2: The Legend Continues”). Lawson was also the writer and he stars in this production, putting him the same category as Orson Welles, although few will find this effort as memorable as “Citizen Kane” or “The Magnificent Ambersons.”

The title of this endeavor, The Little Death, incidentally is Aussie slang for an orgasm. *sigh* Here, Lawson plays Paul, who finds out his girlfriend, Maeve (Bojana Novakovic, “Edge of Darkness”), has a rape fantasy. At first, he’s shocked and then, after discussing it with a friend (Ben Lawson, “No Strings Attached”), he finds out that once she reveals it to him, it’s no longer rape. This is not the first time viewers will be confused here.

Next we meet another couple, where husband Phil (Alan Dukes, a bunch of Australian TV shows no one has heard of) can only copulate with his wife, Maureen (Lisa McCune, “Little Fish”), when she is asleep (or unconscious). Nothing creepy at all about this. It does lead, however, to a funny scene with his boss, Kim (Lachy Hulme, who looks like Jake Gyllenhaal after a good beating), who gives Phil some sleeping pills to help him get some rest. Instead, he puts some in his wife’s tea and when she’s blitzed, he tries to fondle her in front of his sons.

The next main twosome is Richard (Patrick Brammall, “Griff the Invisible”) and Rowena (Kate Box, “Random 8”). It seems that Rowena is unable to reach full climax unless her partner is in some kind of pain. This is exhibited hilariously when Richard’s father dies off screen. And you should see this lady AFTER the funeral. Meanwhile, we get another couple, Dan and Evie (Damon Herriman, “The Water Diviner” and Kate Mulvany, “The Great Gatsby”) who try role-playing with varying degrees of success (cop/suspect and doctor/nurse, etc.), while a creepy old guy, Steve (Kim Gyngell, who looks more like the late Richard Crenna than the late Richard Crenna did) is knocking on their doors bringing gingerbread cookies and introducing himself as a sexual predator.

With so much going on, The Little Death is like “New Year’s Eve” (although “New Year’s Eve” didn’t have any laughs and wasn’t nearly as sexualized), but the various storylines can also be distracting and the inclusion of Steve is just unnecessarily silly. I’ll give Lawson credit for his effort though, it’s just that American audiences are not going to care for the sexual fantasies of a group of Australians any more than they would their own kind, especially when there isn’t very much compelling about any of the characters. 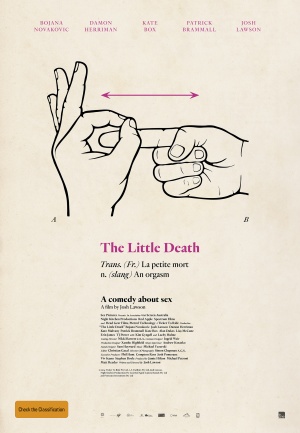