“Not in the hands of boys, but in their eyes shall shine the holy glimmers of good-byes” — Wilfred Owen, “Anthem for Doomed Youth”

In 1915, Australian and New Zealand (Anzac) soldiers formed part of the expedition that set out to capture the Gallipoli peninsula in Turkey in order to open the Dardanelles to the allies with the ultimate objective of capturing Constantinople (Istanbul), the capital of the Ottoman Empire, an ally of Germany. It was a campaign in which over 50,000 allied troops were killed including 8,000 Australians. Directed by Russell Crowe from a screenplay by Andrew Knight and Andrew Anastasios, The Water Diviner, an Australian-Turkish co-production, was released in conjunction with the 100-year anniversary of the landing at Gallipoli which is celebrated in Australia as an event of national pride even though it led to a military defeat.

The Water Diviner focuses on Joshua Connor (Russell Crowe, “Noah”), an Australian farmer who uses his skills as a dowser or water diviner to attempt to find his three sons who were reported killed at Gallipoli. Without any historical or background information to guide us, the film thrusts us directly in the battlefield where Turkish troops wait in the trenches, ready to advance to positions that have been abandoned by Anzac soldiers. It then shifts to a time before the war when Joshua, his wife Eliza (Jacqueline McKenzie, “Beneath Hill 60”) and three sons, Art (Ryan Corr, “Wolf Creek 2”), Edward (James Fraser, “Sleeping Beauty”), and Henry (Ben O’Toole) are enjoying life at Connor’s farm in Victoria. It is before the boys, encouraged by their father, leave to join the Australian army out of a sense of patriotic duty.

Fast forward four years to 1919 where we watch as Joshua successfully finds a water well on his arid land using his skill as a dowser, a centuries old practice that uses a divining rod or other device to point towards an area where there is water or other objects. It is a skill that requires psychic ability as well as a strong knowledge of topography. Sadly, we soon learn that Connor and his wife are mourning the loss of their three boys, missing and presumed dead in the war. In a poignant scene, Joshua, on his wife’s urging, agrees to read the book Arabian Nights to the boys, but all we see is Joshua speaking to three empty beds.

After a further tragedy strikes the family, a heartbroken Connor leaves Australia for Turkey where he hopes to use his intuitive powers to locate his sons’ bodies at Gallipoli and bring them home for a consecrated burial. When he arrives in Istanbul, he is met by a precocious ten-year-old boy, Orhan, wonderfully performed by young Melbourne actor, Dylan Georgiades. The boy dutifully steals his luggage and leads Joshua to a hotel where he is reluctantly given lodgings by Ayshe (Olga Kurylenko, “To the Wonder”), a widowed Turkish innkeeper who still views Australians as the enemy.

When Ayshe sees that her son relates to Joshua better than he does his overbearing uncle Omer (Steve Bastoni, “Drift”), she warms up to him and good chemistry begins to develop. Though told by the occupying British officers that he is not allowed to visit the battlefield, Major Hasan (Yilmaz Erdogan, “Once Upon a Time in Anatolia”) and Sergeant Cemal (Cem Yilmaz, “Coming Soon”), leaders of the Turkish army helping the ANZAC “Grave Unit” find missing soldiers, military officers, smooth the way for Joshua to go to the restricted zone. It is there that he makes a surprising and life-changing discovery.

Bolstered by the vivid cinematography of Andrew Lesnie (Oscar winner for his work in “The Lord of the Rings: The Fellowship of the Ring” and a frequent collaborator with Peter Jackson), The Water Diviner is an honest and heartfelt effort that shows in human terms the futility of war and the devastating effects it has on families. It is marked by outstanding performances by Yilmaz Erdogan, Olga Kurylenko, and especially by Russell Crowe, who, in an understated way, carries the burden of every father who has lost children in war. Though the film develops complex characters such as Major Hasan, it also contains some unfortunate stereotypes such as the Turks as noble and heroic, the British as pompous and arrogant, and the Greeks as merciless, marauding bandits. In spite of its tendency towards oversimplification, however, the heart of the film is the simple and personal story of a father’s love for his sons. It is a story that is not afraid to show a connection between former enemies, a connection that strikes a universal chord in those who long for peace. 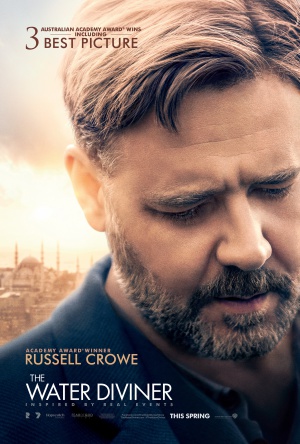