After a summer slew of big-budget studio films, it can be difficult to find, sit down and watch a movie with more modest origins. Yet for the second time in a row, director Christopher Di Nunzio manages to cross that threshold and craft an engaging narrative around seemingly finite resources.

His latest, A Life Not to Follow, unravels its story through three linked stories in the grimy, gangster-ridden streets of Boston. The first follows Eric (Fiore Leo, “Joy”), a hitman reflecting on his past in a bar and taking a last stand against the consequences of his past. The second revolves around Angelo (John Martellucci, “A Woman Called Job”) a gangster tasked with the difficult objective of executing a friend. The final features a familiar face from Di Nunzio’s previous release “Delusion”: David Graziano portraying a private detective investigating a missing girl that ties all three stories together.

Constructed in a non-linear fashion, the script is surprisingly strong throughout. Di Nunzio’s crime film influences are obvious — with lines and situations alluding to “The Godfather Part 2” and “Reservoir Dogs,” among others — yet they are organically integrated into his story. While some are more effective than others, each character is well-realized with purpose and depth. The photography is notably top notch and decidedly modified from the look of his first feature, “Delusion.” It’s hard to get lighting this evocative on a low budget, but Di Nunzio manages to craft some honest mise en scène moments. It’s impressive, even if some imagery is borrowed from greater works.

Unfortunately, the surrounding production is filled with so much promise that it tends to make extremely minor foibles stick out like a sore thumb — foibles that I assure small-time filmmakers are all too familiar with. Bartenders only serve water, general sound mixing issues persist throughout, and there are minimal-to-zero extras encountered. One could argue these are in place to avoid any diversion from the central characters, but if a genuine world were crafted around these characters, their plight would feel all the more authentic.

The performances are admittedly all over the place. There’s an emotional intensity from the actors in the first segment that seems more or less absent from those in the second, despite it being just as personal a tale. However, harrowing close-ups and skillful dialogue more often than not cancel out most quibbles. The standout, once again, is Graziano who brings a unique charisma and charm to the film.

I hate to dock this movie because of what I attribute to the limitations of low-budget filmmaking, but I do so with the hope that this is just a stepping stone on a greater path. A Life Not to Follow is still an engrossing and inventive take on noir that we don’t often get to see. Its 106-minute official runtime flies by and ends abruptly, and I still wanted more. I’d love to see what Di Nunzio can do with a larger budget and a stronger cast. He has a strong visual eye and an allure towards above-average narrative ideas, so it would only benefit him to reach a little higher in his next project. 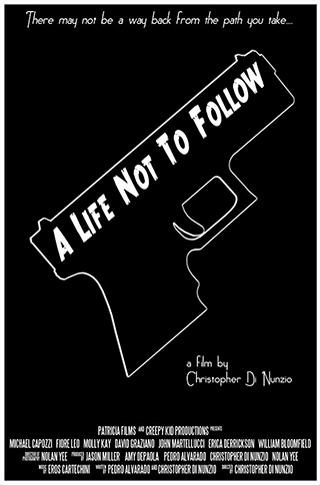