Annabelle: Creation begins sometime in the mid-twentieth century where, isolated in a beautiful old farmhouse, dollmaker Samuel Mullins (Anthony LaPaglia, “A Good Marriage”) lives with his wife, Esther (Miranda Otto, “The Homesman”), and his happy, fun-loving daughter Bee (Samara Lee, “Concussion”). As he puts the final touches on a familiar limited edition doll, a folded piece of paper is pushed under the door; in blue crayon, the words “Find me” tempt Mullins from his work station to the house and into a game of hide-and-seek with Bee. The Mullinses are established as a loving, church-going family who are well-liked by their town. Sadly, tragedy strikes one day on their way home as Bee is killed by a passing car while her father tries to change a flat tire on their truck.

Years later, Mullins and his wife open their home to a displaced group of orphans, hoping to bring life and happiness back to their days. Accompanied and cared for by Sister Charlotte (Stephanie Sigman, “Spectre”), the group of girls includes Nancy (Philippa Coulthard, “The Catch” TV series) and Carol (Grace Fulton, “Badland”), the two oldest girls whom everyone looks up to, Linda (Lulu Wilson, “Deliver Us from Evil”) and her dear friend Janice (Talitha Bateman, “The 5th Wave”), who is fighting off the effects of a recent battle with polio. The two girls have made a pact to never be apart, vowing that if a family wants to adopt, they must adopt both girls, making them true sisters forever. As the girls choose their rooms (even Jan, who benefits from a chair lift built into the stairway), Mullins instructs them to stay away from one locked room, which, of course, we know will be impossible for curious girls in a horror film.

One evening, unable to sleep, Janice’s attention is caught by a small piece of paper pushed under the door. “Find me,” it reads. As she stands in the hallway, a second note is pushed out from under the forbidden locked bedroom door. “In here.” Strangely, the door is unlocked, and Jan enters Bee’s old bedroom where she discovers a replica dollhouse under a sheet and a narrow closet which houses the limited edition doll on a chair. When she hears Mullins coming, she runs back to her bedroom, and guilt drives her to confess her sin to Sister Charlotte the next day. Unfortunately, despite Jan’s contrition, she and the other girls are plagued by a series of increasingly frightening events as a dark presence tries to gain control of their souls.

Directed by David F. Sandberg, Annabelle: Creation is the rare second film of a series that’s more enjoyable than the original (I think producer’s James Wan’s hand in this is notable — he seems to be the only recent horror filmmaker capable of such a thing). Technically a prequel to 2014’s “Annabelle,” Sandberg’s handling of dread and scares is very similar to his previous film, “Lights Out” — there’s very little story to distract the audience’s attention, and what story there is serves only as an explanation for why certain situations are established in the film. Once that’s taken care of, Sandberg works only to build suspense and ensure that audiences simply enjoy the slow increase of threat to the characters. The first few scares are generally laughable — blink and you’ll miss it suggestions of a dark presence in the farmhouse and the establishing of a handful of elements that would make Anton Chekhov nod in approval. As seasoned horror fans, we know full well that each of these elements will come into play later, but we’re not here for a complicated story; we want to renew our fear of what’s in that dark hallway and what’s lurking under the bed, and Sandberg delivers on that need.

Annabelle: Creation makes good on the same surprise enjoyment delivered by another prequel film, 2016’s “Ouija: Origin of Evil,” which also stars Lulu Wilson. (If you haven’t seen that movie, you’re missing out on an incredible performance by this young lady — on the ranking of creepy horror children, her Doris is right up there with Gage Creed from “Pet Sematary”). Both of these films improve on their lackluster originals, while Annabelle: Creation also incorporates some delightful Easter eggs fans of the “Conjuring” universe (as it’s being called) and Ed and Lorraine Warren’s original caseload stories will thoroughly enjoy (not to mention producer Wan’s penchant for inducing incredible amounts of dread with benign old songs).

While it’s not a film you’ll feel compelled to watch over and over again, Annabelle: Creation is definitely better than the original “Annabelle,” and surprisingly, at close to two hours in length, doesn’t drag on unnecessarily (stick around during and after the credits for a couple of short smile-inducing scene-flashes). The special effects, use of darkness and shadows to create senses of foreboding and tension, and frequent jump scares are enjoyable, even though they’re not ground-breaking in any way. For a late summer outing, Annabelle: Creation, like Sandberg’s previous work, doesn’t try to be anything more than it is, and as a result, it’s a refreshing summer scarer that helps us gear up for the fast approaching Halloween season. 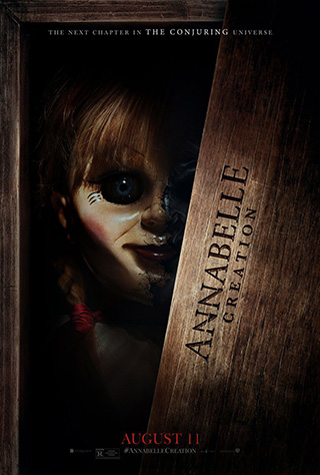