Never Let Go should have been jettisoned before it even got past the pitch meeting. Borrowing from an endless supply of 80s-era Cold War thrillers, Never Let Go makes the crucial mistake of combining lame acting, a nonsense script, and boring musical choices into an utterly forgettable — if unintentionally hilarious — action movie.

Angela Dixon (“Offensive”) plays Lisa Brennan, a single mom coping with the loss of her father. (We see the father’s death in flashback, and it appears to have taken place when Lisa was a little girl, but apparently she’s not quite over it yet.) Her mom Maria (Lisa Eichhorn, “About Time”) suggests that she take a vacation with her infant. You know, to get away from it all. And, smart lady that she is, Lisa travels to an unnamed third-world country for some rest and relaxation. By herself. That she is in a country that regards women’s rights as something of a passing fad in other countries does not seem to cross her mind.

Lisa has a secret, too. (This is not a spoiler.) The baby’s daddy is a political candidate named Clark Anderson (Nigel Whitmey, “London Has Fallen”). A married political candidate. Naturally, he doesn’t want anyone to know he’s Baby Sophie’s father, as this might alienate voters. So he’s underwritten Lisa’s sojourn for inner peace in the Middle East. But we know right away that things likely won’t go well for Lisa, because the very first scene — before even the credits! — shows a toddler being abducted from his home, followed by a rapidly deteriorating “Missing” sign, traumatized parents, the whole works. Foreshadowing? Yes, because pretty much the instant Lisa and the baby sit themselves on a nice beach and she’s distracted by some guy selling bracelets, poof, Sophie’s gone.

Now, me, I thought that was far fetched enough. The beach is crowded. She’s already an on-edge mom. You’re telling me that one dude showing her baubles is enough of a distraction for another guy to swoop in an snag a child? But then Lisa really springs into action. She chases down the bad guys and manages to flatten one of them with a series of karate moves — right into the path of a car, which runs him over. Whoops. And just like that, our heroine is on the run from the local cops, who want her for murder and who don’t quite believe her whole my-baby-was-abducted story.

Seems like Lisa has a certain set of skills that had not previously been disclosed to the audience. And has friends in high places who can (sort of) magically track the bad guys. One of my “favorite” parts of Never Let Go was when Lisa, who already knows that the getaway van is on a long road outside of the village, spends about twenty minutes jumping from rooftop to rooftop, running down stars, and climbing down walls in a desperate attempt to find it. I also liked the scene where Lisa is being pursued by three local cops and knocks over an empty trash can to slow them down; the cops literally stoop down to fake-touch the trash can before walking around it, as if they were playing touch football with it.

Then there’s the music. Every time Lisa takes off with her intense running, the soundtrack is basically a bossa nova played on a Casio, circa 1983. And I mean every time; there are no variations to “Runnin’ Around (Lisa’s Theme),” which is my own name that I just now made up. This is the kind of thing that makes a movie ripe for “Mystery Science Theater 3000” or “RiffTrax.”

So, aside from Lisa’s oddly high skill level and unrealistic string of good luck, just how bad is this dud? Well, you may be happy to know that in Never Let Go you’ve been spared a plot twist; the story hurtles toward an inevitable climax, drawn not by gravity or inertia but by the amazing suckiness of the movie itself. And you all know about the law of diminishing characters, right? Is it possible that someone we see early in the movie will show up later? Maybe a dangling plot thread will finally be resolved at the denouement. All quite likely in this movie.

There’s just no one who comes off looking good in this movie. Dixon lacks screen presence; what the film needed was someone more like Cynthia Rothrock. Most of the other characters get scant onscreen time, so one never feels invested in their futures, anyway. Okay, I did think of one positive — Rami Nasr (“Unlocked”) as the chief of police, Hassan. He’s good. Funny, even. And Sarah Perles (“Palestine”) as one of his officers is also good. Neither is given much to work with though.

This is one movie for which one should take heed the words of Elsa of Arendelle . . . 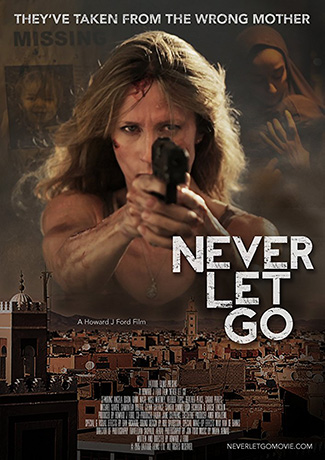