“I miss the Cassie I was. I wonder what that Cassie would think of me now — the Cassie who kills.”

The introductory voiceover for The 5th Wave is certainly not typical of your run-of-the-mill PG-13 fare, but unfortunately, that’s where the non-similarities end. The first act of the film introduces Cassie Sullivan (Chloë Grace Moretz, “The Equalizer”) as an average teenage girl — she plays soccer, she goes to parties with her friends, and she’s awkward with the boy she likes. Cassie has a good homelife, honors her curfew, and nurtures a close relationship with her little brother, Sam (Zackary Arthur, “Transparent” TV series). The upheaval in Cassie’s life comes not from within, but from without — from beyond, if you will. She tells us, “When you’re in high school, everything feels like the end of the world . . .” but then, one day, the end of the world arrives in the form of giant spaceships crossing the planet, and Cassie and her family get the opportunity to spot one cruising above their Ohio home. The Others, as the visitors are called, do nothing for ten days, but then the Waves of attack begin.

The 1st Wave is an electromagnetic pulse that wipes out all electricity, engine power, cell service, and running water — everything we take for granted. In the 2nd Wave, incredibly powerful earthquakes unleash tsunamis across the planet, wiping out any cities or towns located near water. In the 3rd Wave, a incurable strain of the Avian Flu is released; some are immune, some get sick and recover, but most people, like Cassie’s mother, don’t.

In his attempt to keep his children safe, Cassie’s father (Ron Livingston, “The End of the Tour”) ushers the family to a campground nearby where many refugees have found solace in numbers. They have small gardens, a mess hall, and clean water, and things start looking up until the military arrives with school buses and begins ushering all children onto them. Families are divided and relatives separated in the name of safety, as Colonel Vosch (Liev Schreiber, “Spotlight”) explains the protocols to the adults at the camp. The 4th Wave has begun; The Others have begun taking human beings as hosts. They are undetectable, and anyone could be an Other, so the military has come to transport everyone to Wright-Patterson Air Force Base where they will be kept secure. But, as we soon find out, not only are the children being kept secure, they’re also being trained to protect humanity from The Others.

In his 2013 review of Rick Yancey’s original young adult (better known as YA) novel, Brian Truitt of USA Today called The 5th Wave “a modern sci-fi masterpiece . . . [that] should do for aliens what Twilight did for vampires as it brings outer-space entities to Earth for the sole purpose of complete annihilation of mankind.” While I haven’t had the pleasure of reading the source material for director J Blakeson’s entry into the world of YA adaptation films, I can say that the movie definitely does for aliens what “Twilight” did to vampires. It takes any real fear we have of them and boils them down to palatable servings, for the youngest demographic of YA fans.

The 5th Wave is trying to break out as the new trilogy fans will clamor for at the cinema, but the “twists” in the story are predictable and the writing is incredibly trite. At the forefront of such a story, you want characters finding their humanity as they come together in a battle against certain destruction. Instead, what USA Today called “an engaging look at humanity” has become a rushed story of a girl looking to reunite with her little brother, at the hands of screenwriters Susannah Grant, Akiva Goldsman (from whom we expect SO much more), and Jeff Pinkner (who, with Akiva, is part of the team adapting Stephen King’s The Dark Tower to screen — please do well by us, gentlemen!). To make matters worse, it’s marred by a forced love triangle setup for our heroine, Cassie, the boy on whom she had a crush in high school, Ben Parish (Nick Robinson, “Jurassic World”), and her mysterious new friend Evan (Alex Roe, “Sniper: Legacy”). As an adult, I was insulted by how the romance — which is clearly there to cause angsty problems for Cassie later — was so central to the storyline of an alien invasion action film. While films like “The Hunger Games” and “Divergent” certainly incorporated romance into their plotlines, it wasn’t the driving force of either story (unlike “Twilight”). Note to YA authors and film directors — there doesn’t always have to be cute boys in the picture in order for a young heroine to be appealing to audiences!

Aside from the lovey-dovey stuff, the cast of the film does the best they can with the material they were given. Moretz, who has proven herself time and again, is a heroine with no room to grow after the first half of the film. Once she encounters Evan, her strength dissipates. The young actors who round out the cast are adorable in their feigned toughness, but are ultimately caricatures of little boys and girls playing “soldier.” And the adults, as in most YA, are either useless or threatening, and the adult cast fills their spaces as expected.

Overall, The 5th Wave is just another grasp at a franchise based on YA novels. I can’t put my finger on whether it’s simple YA action fatigue, or if I’ve just had enough experience to distinguish between the good YA stories from the hasty imitations (the latter has my vote), but I don’t anticipate this stretching into additional films. While I hear the novel is, as USA Today describes it, “a page-turning rocket of popcorn-movie action,” ironically, the movie definitely is not. Therefore, it’s probably better to hit the library instead of the theater on this one. 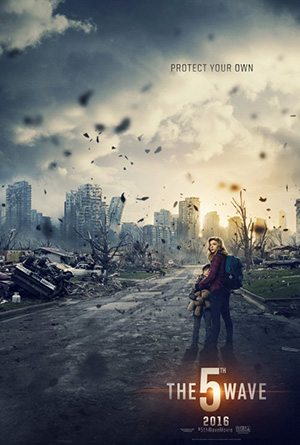