From a religious perspective, I’ve never considered myself a non-believer but more of a sideline believer. I am fascinated by the Bible shows on the Discovery and History channels. So without question, I had to get out to the local cineplex to catch a viewing of The Reaping. It seemed to have all the good things a movie of this genre needs — a hot chick in a tank top and freaky, mystical shit.

The premise of The Reaping is rather simplistic and has been done before in similar veins (see “The Seventh Sign” and even “Signs”). Hilary Swank plays Katherine Winter, an ex-missionary, who after the murder of her family questions Gods existence. So much so in fact, that where ever possible she dispels that a miracle has taken place by providing scientific alternatives to those effected. She and her colleague Ben (Idris Elba), take on another case in Haven, Louisiana where, after the death of a boy, it appears the 10 plagues of Egypt have been wrought again.

And while the premise seems interesting on paper, the presentation of it falls short. There is just nothing spectacular about The Reaping. I expected a strong showing from Hilary Swank (didn’t she win a few Oscars?). Instead I got an unconvincing performance — she seemed very wooden and considering the circumstances, she showed little emotion. The supporting cast, provided little more than side fodder for Swank’s character to interact with. But what really twisted my nuts was the lack of visual effects. I got the feeling the plagues were used more as a backdrop to the story when instead it should have been used to a greater extent. Here is how I see the director going through the list with his effects team:

I think you get the idea of where I am going with this. An opportunity to really dress this ugly woman up for the evening was lost. And it was what I was most excited to see brought to life too.

I should note, that I try to at least find some good in every movie I watch. The problem is, there really isn’t much to say about The Reaping in that light — but I’ll give it my best effort (and trust me, it took some effort). Hilary Swank looks good. Not great, but good. She could’ve looked even better had her quasi-sex scene been more revealing. And even though it wasn’t pulled off as well as it should have been, the ten plagues is still an intriguing idea to build a movie around. I see a wanderer roaming the Midwest, channeling the power of God in ways it wasn’t meant to . . .

All told, from a religious thriller standpoint The Reaping falls very short of the mark set by “The Exorcist.” Hell, it falls short of the lower mark set by movies like “The Skeleton Key” and “Exorcist: The Beginning” (even those movies had plot twists that were masked slightly better). Watch The Reaping only if you absolutely have to (i.e., you’ve been instructed by God). Otherwise your time would be better spent repenting for all those sins you’ve committed — you know the ones I’m talking about. 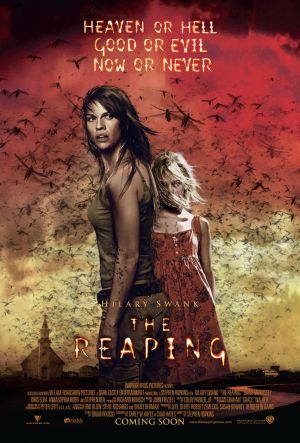