After all the critical acclaim heaved upon Danny Boyle and Alex Garland for helping to redefine the zombie flick with “28 Days Later…,” I was definitely excited to see if something similar could be done with science fiction genre. Granted, there are plenty of recent space movies but they’ve all focused on action and big screen effects. Could these guys do something special again, something along the lines of “2001: A Space Odyssey?”

In Sunshine we’re presented the notion that years in the future the civilization of mankind is pushed to the brink of extinction due to severe weather change. No, boys and girls, this weather change is not brought on by greenhouse gases causing global warming — quite the contrary — they’re brought on because the sun as been reduced to a smoldering ember. And without heat and light the earth has become a mostly frozen wasteland. Enter a team of eight astronauts charged with flying a spacecraft, The Icarus II (ironic name, eh), to the sun and delivering a payload which upon exploding will cause a reaction reigniting the heat producing star. Sounds like a walk in park, right?

Well of course, things can never go right for our heroes and heroines. And that is where Sunshine remains true to it’s thriller roots. To build up drama and suspense, problems are cascaded into the path of Earth’s saviors (similar to “Armageddon” and “The Core”). The shields fail when changing trajectory so a space walk is needed to repair the damage. How bad can an emergency space walk go? A fire breaks and destroys the oxygen producing labs (mini bio-dome). To survive, you’ve got to have air to breathe, right? Docking and undocking to dead craft in the middle of space can be done with your eyes closed, can’t it? Of course it can! Above all else, who would expect something unexpected while exploring that same ominous ship? Certainly not me.

What sets Sunshine apart from the rest of the crowd and makes it intriguing to watch is the human element. Boyle and Garland decided early on to focus on the mind. It been said the brain plays tricks on you when one is subjected to extended periods of isolation. And if you ask me, thirteen months of travel in tight, claustrophobic rooms and corridors certainly qualifies as isolation. Tensions mount and fights erupt as the characters are put into situations they are uncomfortable with. Even more telling is the inner soul searching each must do when faced with their own mortality. From the comfort of our armchairs it’s easy to say, “the needs of the many outweigh the needs of the few”. But how many of us when confronted with being the few, could or would swallow that bitter pill without a great deal of reflection? Self-preservation, like mother nature, is a bitch.

My only gripe with the movie is the ending. The mission is on the brink of failure, I’m engrossed with wanting to see the outcome and suddenly I found myself asking what the hell was going on. Was Capa (Cillian Murphy, “Red Eye”) on the payload or on the ship? How did he manage to find the others and more importantly where were they? Was I watching dream sequences intermixed with real-time happenings? These aren’t the type of questions I wanted to be asking during the final act! It left me a bit aggravated and disgruntled. I truly expected Sunshine to end differently.

But don’t let the mottled ending dissuade you from going to see this movie when it gets released in the states (or wherever you may be). The psychological overtones of the other 9/10ths of the movie outweigh the final ten minutes. I wouldn’t say Boyle and Garland have reinvented the science fiction movie but they certainly added something that had been missing for some time — characters with real human shortcomings. 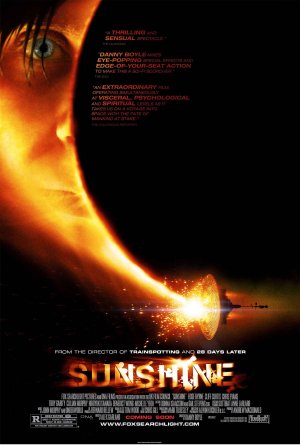