Um . . . hmm . . . wow. I’m stupefied at what a colossal mess The Three Musketeers has been made into. Three of the more prominent heroes in history have been watered down to pathetic caricatures and, in their own movie, given a back seat to a nausea inducing 3D experience and to a 17th century gown wearing Milla Jovovich who rehashes all the moves she’s learned on the set of the five (but feels like 20) “Resident Evil” movies she’s starred in.

But, alas, that shouldn’t have come as a surprise — The Three Musketeers is helmed by her husband and master of over-doing it, Paul W. S. Anderson.

It most certainly didn’t have to be this way. Aside from having defined heroes that are world renowned, the film boasts a strong cast, a setting which is ripe for exploration and, although highly revisionist, ladled with inconsistencies and mimicking “Pirates of the Caribbean” too much, a story that had promise.

After being betrayed by Milady De Winter (Jovovich) during a robbery and complete destruction of da Vinci’s vault, the Musketeers — Athos (Matthew Macfadyen), Aramis (Luke Evans) and Porthos (Ray Stevenson) — are reduced to drinking too much wine and raising the ire of the guards of Cardinal Richelieu (Christoph Waltz) because they’re bored. In ridiculously contrived meetings, a young, cocky D’Artagnan (Logan Lerman) runs into the fabled swordsmen and ultimately joins them after an equally contrived swordfight — rife with slow motion, sparks and acrobatics — with Richelieu’s forces led by the one-eyed captain of the guard Rochefort (Mads Mikkelsen). Soon thereafter, the foursome set out to stop some conspiracy that no one gives a damn about.

The extravagantly silly, albeit well-choreographed, sword fighting is an expectation in a romp like this — what isn’t so much is the asinine one-liners and the patently bad way they’re delivered by the one dimensional characters. In one scene while locking swords with a hapless soldier, D’Artagnan calmly looks over to his soon to be love interest Constance (Gabriella Wilde) and inquires, “Are you enjoying the show?” I’ll credit Lerman though — he was at least breathing heavily as he read those lines (you know cos he was busy exerting himself in a sword fight).

I can’t credit anyone else though; they’re either all sleepwalking through their lines or flamboyantly overacting them as Orlando Bloom — sporting one of the worst hairstyles I’ve ever witnessed — does as the conniving Duke of Buckingham.

I suppose, now is a good time to mention the weaponized airships which played such an important part in the trailers for The Three Musketeers. They’re cool, well developed and add an interesting element to the action. But for the life of me I couldn’t figure out why no one thought to shoot out or set fire to the balloon and instead decided shooting cannons in the traditional high seas shootout manner was the better option.

Then again, I couldn’t figure out why no one could see the blatantly obvious in front of them either. What people were doing, who they were doing it with and why they were doing it was done front and center for all to bear witness to. Had just one person reacted, the movie could have ended in 15 minutes flat, instead of the 100 or so minutes we’ve been stuck with.

There have been some dreadful enactments of Alexandre Dumas’s creation through the years and to that list we can safely add this shockingly bad re-imaging. To that list also will go the sequel which, much to my disappointment, The Three Musketeers unashamedly sets up too. 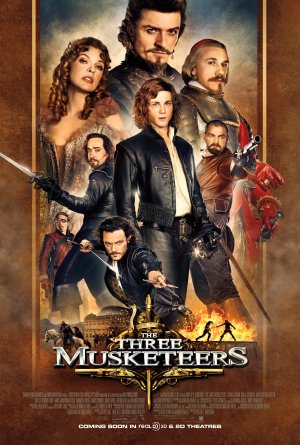