The story of Whisky Galore! is as charming as it is simple. It recounts the legend of the Scottish Island of Todday, where an isolated community experienced a drought of whisky during the height of the war. As one of its characters snidely remarks, the dilemma is hardly an outbreak of disease, which the village itself agrees with. No, it’s far worse than that. For Todday, whisky is ingrained in its culture and heritage — defining much of the community’s identity — and Gillies MacKinnon’s remake of the 1949 Ealing Studios classic celebrates this continuously throughout the 98-minute running time. While this version may lack comparatively to Alexander Mackendrick’s fondly remembered original, it stands as a serviceable retelling of Scots outwitting some overly taut Brits with some harmless law-breaking.

The film begins with a disclaimer that the events are based on a true story, an incident still discussed by the residents of the real-life island of Eriskay to this day. In 1941, after an extensive period without whisky from rationing during the war, a shipwreck containing 24,000 crates of whisky inspired the locals to raid the ship for its sorely-needed liquor. Before the custom authorities could arrive to investigate, the village buried the whisky in the sandy beach, drainage pipes and anywhere else they could think of in order to preserve the crates for themselves. Not only has the legend passed on through generations, but some locals often remark that a bottle can be found beneath a bed of sand if a person looks hard enough.

Whisky Galore! follows a similar outline, but with the added plot of the postmaster Macroon’s (Gregor Fisher, “Wild Target”) two young daughters — Catriona (Ellie Kendrick, “An Education”) and Peggy (Naomi Battrick, “Cherry Tree”) — and their suitors attempting to marry despite the displeasure of their respective parents. All of this culminates in a film which effectively celebrates a sense of community reminiscent of Federico Fellini’s “Amarcord.” Not that this Scottish caper earns the high esteem of the Italian classic, essentially stretching a half-an-hour plot into a standard feature length, but it, like “Amarcord,” creates a community and atmosphere seldom seen in cinema today.

With its minuscule budget working for it, MacKinnon (“Castles in the Sky”) creates a sense of humility that makes the story and characters charming to watch as each development causes them to reconsider how best to get away with their desires. The film almost mocks at its own lack of action in an inversion of Chekov’s gun, where the viewer is constantly aware that guns and ammo are on the island, but they won’t be used in this movie.

It’s a shame though, that the film’s biggest detriment stems from an overall dry tone that makes the film’s charm wear thin, even when the foolish Captain Wagget (Eddie Izzard, “Boychoir”) appears (and mostly fails) to deliver some comic relief. Despite this, no other word describes watching Whisky Galore! more aptly than “delightful,” and it will surely treat well enough, those looking for a bit more Celt in their movie. 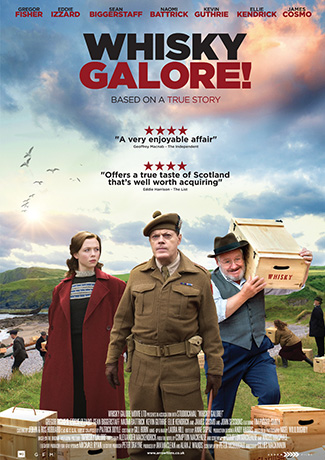