Stet, a troubled and angry Texas boy of eleven lives on the less affluent side of the tracks in Boychoir, Quebecois director François Girard’s (“The Red Violin”) feel-good story about a musically talented boy’s climb from adversity to self-acceptance. Written by Ben Ripley (“Source Code”), Girard’s first film in seven years boasts an outstanding cast that includes Dustin Hoffman (“Chef”) as Anton Carvelle, choirmaster at the prestigious Boychoir National Academy, Kathy Bates (“Tammy”) as Justine, the school’s feisty headmistress, and newcomer Garrett Wareing as Stet, a young student with loads of talent and plenty of attitude.

In constant trouble at school, Stet returns home each day to clean up after his alcoholic mother and perform household duties normally handled by adults. Nurtured for his precocious singing talent by the principal at Stet’s school in Odessa, Texas, Ms. Steel (Debra Winger, “Lola Versus”), the boy is granted a private audition with Master Carvelle (Hoffman) through her efforts but, not knowing who he is, Stet abruptly walks out. When a family tragedy strikes, Steel finds Stet’s absent father (Josh Lucas, “J. Edgar”) and persuades him to reject foster care and apply for the boy’s admission to the Boychoir in New York, a nationally recognized singing group with its own boarding school.

Stet, however, is rejected because of his attitude and lack of discipline, that is, until his father, relieved to keep the knowledge of his secret son from his wife and children, smooths the way with a large undisclosed “contribution.” Unsurprisingly, the boy has trouble adjusting to his new situation, getting into fights with his over-privileged classmates, breaking windows, raiding the candy machine, and being generally withdrawn and uncooperative. His extraordinary singing ability is recognized, however, by both Wooly (Kevin McHale), an academy teacher who has faith in Stet and Drake (Eddie Izzard, “Cars 2”), the assistant choirmaster who is impatiently waiting for Carvelle to retire.

Unable at first to read music, Stet is tutored by a fellow student and nurtured by Carvelle, a strict but compassionate disciplinarian whose own ambition for a career as a concert pianist was ended abruptly by a rejecting teacher. In a moving scene that takes place on a basketball court, Carvelle uses “ruthless compassion” to tell Stet, “All you need to do is quit since it is obvious that music means nothing to you.” But Stet, with a new-found determination, refuses to quit. However, when a nasty confrontation arises with Devon (Joe West), another talented singer who insists on getting all the solos, Seth has to do all he can to survive a disciplinary hearing and prepare for a concert in New York, one that may be the most important in the school’s history and in his own life. It is a concert in which all parents are invited.

Boychoir has a story that keeps us engaged but, if the film is remembered for anything, it will be for its music. Angelic is the best way to describe the American Boychoir’s performance of choral works such as Tallis’ Spem in Alium, the Balulalow from Britten’s Ceremony of Carols, Handel’s Ode for the Birthday of Queen Anne and Hallelujah chorus from The Messiah, and especially the exquisite Pie Jesu from Gabriel Fauré’s Requiem, a chance for Stet to demonstrate his unique talents as a soloist. While the potential is present for a great film and the film’s conclusion is extremely moving, its potential is unrealized mostly because of its headlong rush to keep the plot moving and stir the emotions at the expense of credibility, freshness and originality, and character development.

Excellent performances by the always reliable Hoffman and Bates keep the film afloat, but the dialogue, when delivered by other than Hoffman or Bates, feels strained and wooden and the film never reaches the heights of inspiration it strives for. Eventually, Stet must confront the reality that his voice is changing and that his time as a boy soprano is limited. When he asks his young teacher what the point of all the music lessons is when a singer’s time in the choir is so limited, the answer goes beyond music to reflect on the impermanence of all living things, a fundamental truth of our existence. It is the film’s most authentic moment. 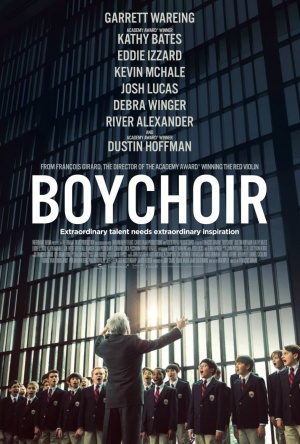